Carpenter Kevin Holtquist installs new wood for the bleachers during renovations taking place at Keyworth Stadium in Hamtramck, May 18, 2016, in preparation for the first season as the new home of Detroit City FC soccer. David Guralnick, The Detroit News
Fullscreen

Larry Muzzarelli touches up the cement in the stands. David Guralnick, The Detroit News
Fullscreen

A laborer works under the stands. David Guralnick, The Detroit News
Fullscreen

Keyworth Stadium in Hamtramck is set to be renovated to become the new home of Detroit City FC soccer. David Guralnick, The Detroit News
Fullscreen

The locker rooms have a fresh coat of paint. David Guralnick, The Detroit News
Fullscreen 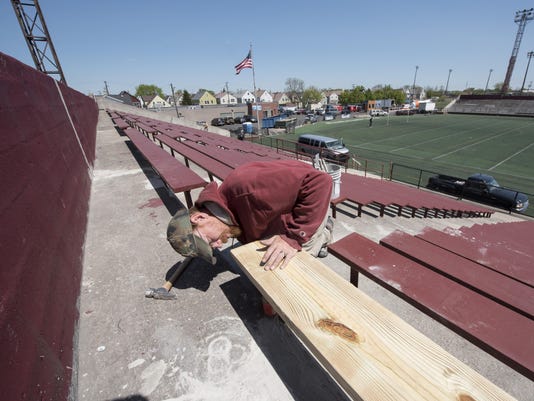 On the west side of the historic stadium, a crew of eight construction workers shoveled up debris after removing an entire section of bleachers while two more in a crane worked on one of the eight light towers.

Across the field, a worker replaced a pair of wooden benches atop the stands and another patched cracks with cement in the race to finish the first phase of renovations before Detroit City FC’s home opener on Friday.

“This is the final stages of what’s been months of rehabilitation for this 80-year-old stadium,” said Alex Wright, one of the club’s five co-owners. “We’re doing a lot of work on the electrical, doing some concrete work and a lot of the work we had to do in this space is structural. We’re not adding a lot of stuff, but at 80 years you can imagine it creates a lot of wear and tear.”

In addition to the structural improvements, there’s been plumbing work done as the locker rooms and bathrooms have been renovated. All the wooden bleachers in the west grandstand have also been replaced and painted rouge, one of DCFC’s colors.

“I would anticipate we’ll be running around with paintbrushes and hammers up until kickoff,” Wright said. “I think any sort of big project like this, that’s the case. You do your very best to hit deadline but there’s always more to do.”

According to Wright, light demo work began at the end of last year and began ramping up in February when the team’s 109-day long community investment campaign generated more than $740,000 to go toward the rehabilitation project.

“It’s extremely ambitious trying to make this happen, but it sort of speaks to how we want to run this organization that we’re constantly pushing the envelope,” Wright said. “As a result, the stadium is not going to be 100 percent ready to go on opening night. Like everything else, it’s going to be a process.

“But we have a vision for where it needs to be and we’re going to keep working toward that until we get to that point.”

And it’s a point the local soccer community, surrounding Hamtramck neighborhoods and DCFC fans are helping reach as countless volunteers have showed up to lend a hand in Keyworth’s makeover over the past few months.

“We’ve organized some volunteer events where fans have come and volunteered their time to help us get this stadium ready,” Wright said. “The best example of that is that most of the bleachers were either installed or painted by some of our fans, which has been a huge boost to what we’re trying to accomplish here.”

While the cold and wet weather provided some challenges during the renovation process, Wright said everything is coming along close to what was expected.

But what he didn’t expect was DCFC having to change its home field from Detroit Cass Tech High to Keyworth because of surging attendance each year since the club’s inception in 2012.

“Last year…we started selling out pretty much the entire season at about 3,500 folks,” Wright said. “We started turning people away and that’s very bad for business.

“At full capacity (Keyworth’s) three times that size so it’s the perfect place for us to move to. It was just a matter of the work that needed to go in to get it ready for us. And that’s another big part of our value as an organization; we’re all Detroiters. I’m from here, I grew up in Detroit and was born here. It means a lot to us to be able to put work into existing structures and existing neighborhoods and sort of build the community in that way.”

Wright added he and others will continue to put in work and identify things that need to be done at Keyworth throughout the season.

“We take it pretty serious when we say this is a community-focused organization. It’s not something that we feel comfortable with having everyone else do for us,” Wright said. “We come from a group, a lot of entrepreneurs in town or folks that we know and are friends with, a lot of them have built up their businesses with the same kind of sweat equity that we’re putting to work here. I think that when you ask a lot of people, you have to be willing to do everything you’re asking of them.

“In the case of rehabbing a stadium, that’s pretty anything from painting bleachers to drilling holes in the back of stadium so we can hang cables to paint the walls. You have to be ready for anything if we want this to be what we know it can, which is going to be the coolest sporting environment around.”

That will show come Friday when the construction sounds cease and chants and screams of the DCFC faithful bellow through the night.

City falls in second round of U.S. Open Cup

Following a scoreless tie through regulation and 30 minutes of extra time, Detroit City FC lost to Louisville City FC 3-1 in a penalty kick shootout Wednesday in Louisville. The loss knocks DCFC out of the U.S. Open Cup tournament.