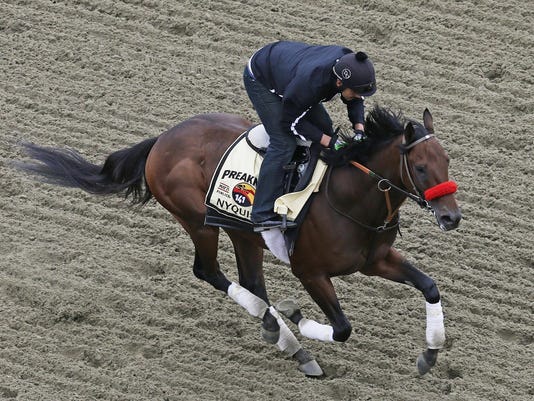 A driving rainstorm didn’t faze American Pharoah as he splashed his way to victory in the second leg of the Triple Crown last year, and it sure appears like Kentucky Derby winner Nyquist will have to do the same thing in a bid to set up another Triple try in the Belmont Stakes.

The National Weather Service on Friday gave a forecast calling for a nearly 100 percent chance of rain beginning early Saturday and continuing throughout the day, with as much as three-quarters of an inch expected. Temperatures will be in the mid-50s with wind gusts up to 20 mph. Post time for the Preakness is 6:14 p.m.

“With a horse like Nyquist, I’m not overly concerned about the weather,” said trainer and Dearborn native Doug O’Neill on a bright, sunny Friday morning. “As far as rain or shine, we’re not going to change anything shoeing-wise He’s going to wear the same shoes he’s got on. We’d just love to have a beautiful day.”

Rain could be a good thing for several of his top rivals, though, especially Derby runner-up Exaggerator, or long shot Cherry Wine. Both have run well in the mud, with Exaggerator taking the Santa Anita Derby on a sloppy track and Cherry Wine breaking his maiden by 91/2 lengths under similar conditions.

Nyquist, with an 8-0 record, won the Florida Derby over a surface listed as good even though the track had been drenched by a rainstorm before the race.

The fleet son of Uncle Mo is a win away from a shot at the Triple Crown, which would give racing back-to-back Triples for the second time. American Pharoah became the first to sweep the Derby, Preakness and Belmont since Affirmed in 1978, a year after Seattle Slew won it.

But first, Nyquist has to defeat 10 rivals at 13/16 miles over Pimlico Race Course, a track he’s become familiar with over the past two weeks. The 3-5 favorite leaves from the No. 3 post with Mario Gutierrez aboard.

O’Neill has been through this before, along with owner J. Paul Reddam and Gutierrez. In 2012, they won the Derby and Preakness with I’ll Have Another, who was retired the day before the Belmont with an injury.

Asked what would be an ideal trip for Nyquist, O’Neill didn’t hesitate: “We break great, have the lead and go really easy around there. Mario knows Nyquist so well. He has so much speed away from the gate, ideally, he gets good position wherever that is and he runs a big race.”

Exaggerator, the 3-1 second choice, may be the most accomplished mudder in the field. In addition to his Santa Anita Derby win, he won once and finished second over muddy tracks.

“He’s run on every track that’s been put before him and that may prove to be an advantage,” Exaggerator’s trainer Keith Desormeaux said. “But I am not sure wishing for one track over another. I’d prefer to have my picture taken in the sun.”

Lani, the first Japan-based horse in the Preakness, is the only other Derby starter in the field. The flighty gray colt arrived at Pimlico on Thursday. He’s run three times on “off-tracks” in Japan, finishing first, second and fifth.

“It would not be great, but everybody has to run on it,” Lani’s trainer Mikio Matsunaga said of a possible sloppy track.

Among the eight new shooters, Abiding Star, Awesome Speed, Cherry Wine, Fellowship and Uncle Lino have shown they can handle an off-track.

Horses usually are fitted with shoes made of lightweight aluminum. When a track surface becomes muddy or sloppy, trainers could opt for mud caulks — small cleats inserted on the back end of the shoe for better traction. Shoe changes are determined the day of the race.

Unlike the Derby, the Preakness is full of front-runners, horses who like to run on the lead. Nyquist is one of them, along with Abiding Star, Awesome Speed, Collected, Laoban and Uncle Lino. If the pace is too fast, it gives closers a chance to make a winning run at the end.

Which is what Romans is hoping for when Cherry Wine breaks from the inside No. 1 post.

“We’ll fall back and chase the speed and come running at the end,” he said, adding jokingly (but sort of seriously), “I challenge Doug to be on the lead by the 5/8ths pole. Don’t listen to what anyone else says. Just go for it. Make them go fast.”

“The thing about our horse is we don’t know for real how good he is,” Reddam said. “Other than his maiden race, which doesn’t really count at five furlongs, he has not been in an all-out drive. So we think there’s a lot more in the tank.”

Go Maggie Go outlasted Ma Can Do It to win the Black-Eyed Susan Stakes on Friday.

It was the third win in four career races for Go Maggie Go, trained by Dale Romans. After staying near the front for much of the 11/8-mile race, Go Maggie Go distanced herself from the competition at the finish to win by 21/2 lengths.

Ma Can Do It edged Kinsley Kisses by a head. Land Over Sea, the favorite trained by O’Neill, finished fourth.