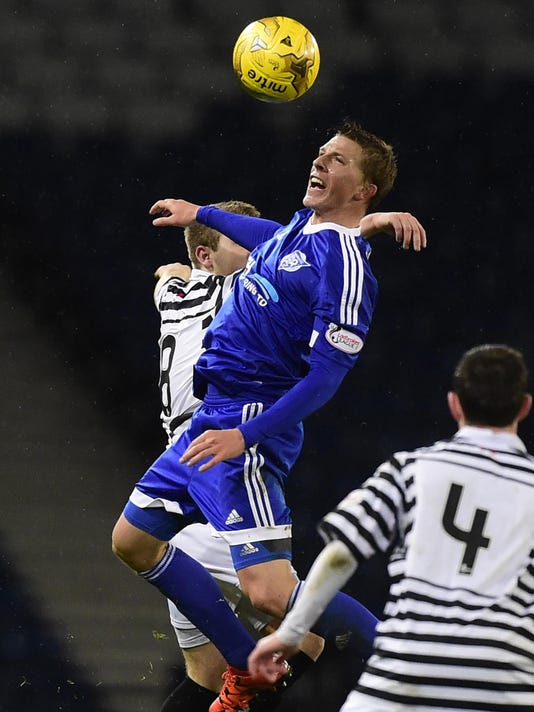 For two years, Kevin Dzierzawski was the only American playing soccer in Scotland.(Photo: Special to Detroit News)

He went to Scandinavia, where he tried out for clubs in Finland, Sweden and Norway without much luck.

But when the Birmingham Brother Rice graduate checked into Scotland, he was admittedly going a bit rogue playing among those speaking with a brogue.

“The first two years I was there I was the only American playing in Scotland,” said Dzierzawski, 24, a midfielder with Peterhead FC of Scotland League One, two tiers below that country’s top flight.

Gedion Zelalem (Rangers) and Perry Kitchen (Hearts) have since joined their fellow American in Scotland.

Inhospitable weather, and fervent, if not unforgiving, fans all conspire against outsiders trying to make the climb in lower rung of the Britain’s less glamorous circuits.

Then there’s the language barrier. The Scots technically speak English, but deciphering the spoken version leaves a lot of hunched shoulders and scrunched faces of utter puzzlement.

“The Peterhead kitman (equipment manager) ... he’s a great guy but he’s impossible to understand.” Dzierzawski said. “There is no way he can be speaking English sometimes.”

Yet, Dzierzawski wouldn’t haven’t any other way. He’s immersed in soccer 24-7.

“They take it more seriously and are more passionate about it than any other sport than Americans are.”

A Scottish League One player’s pay is more likely to be incentive-based. One unsubstantiated figure has the average around 750 pounds ($1,100) a week.

Dzierzawski played at Dartmouth, earning first team all-Ivy League honors as a junior and senior (2011 and 2012). His ties to the New Hampshire school indirectly led him to the Scottish game — the Big Green’s former coach, Bobby Clark, was a goalkeeper for Aberdeen.

Clark set up what’s become an annual Dartmouth-sponsored trip to Scotland, which Dzierzawski used as a chance to network.

The product of the vaunted Vardar youth soccer program auditioned and landed a spot on Queen of the South, which plays in the Scottish Championship, a tier below the first division. He made his debut Sept. 14, 2013, against Raith Rovers.

To stick, though, he’s endured the tricky process of earning a work visa, which involves proving to a Scottish Football Association panel a worthy applicant can do a job better than a natural citizen.

Dzierzawski had his Queen of the South manager and agent testify on his behalf. He also needed letters from his college coach, fingerprints and visa paperwork.

“After going through it, I understood why people were deterred going through this process,” he said. “It was a pain in the neck.”

His work permit status indirectly led to his transfer to Peterhead, where he had been loaned in January 2015. He scored his first goal in a 2-0 victory over Stenhousemuir a few matches later.

This season, he blossomed as the club made its first major cup final appearance and battled for promotion to the Scottish Championship, losing in a two-leg playoff to Ayr United.

Peterhead toppled Falkirk on its Cup run, while also meeting Rangers in the League Cup at Ibrox in August, losing 3-0. Dzierzawski started and played the entire 90 minutes.

He made 40 appearances this season, and had two goals and 10 assists.

Scottish football is not known for its flamboyance or deft touches, but rather hard work and robust tackling.

Dzierzawski, a defensive midfielder who likes to keep the ball on the ground, adjusted his game accordingly.

“There are old-school, hard-nosed Scottish tacklers, but it’s not dirty,” said Dzierzawski, who had four yellow cards this season. “It’s making sure your opponent knows you are there. It’s almost putting a little bit of fear into your opponent and have them check over their shoulder to make sure they know where you are.”

Rain, sleet and snow are common, and while Peterhead’s surface is usually pristine, that’s not always the case at other Scottish League One grounds. And the sun seems like a rarity.

“I probably have a vitamin D deficiency living over there,” he said. “They sure could use some more of it.”

His spare time is consumed with working out and reading. He shares an apartment with a non-soccer playing roommate in Dundee near where the team trains.

On match days, Dzierzawski commutes 90 miles to Peterhead, a fishing town of 18,000 that sits in far eastern part of the mainland.

Dzierzawski envisions returning to the U.S., possibly to play in the Major League Soccer. He was heartened to hear Detroit is expected to get an MLS franchise in 2020.

But for now, he’s focused on Peterhead and turning heads at clubs in the Scottish Premier League or in England.

“I do foresee coming back to the U.S. to play,” he said. “Kelly (his girlfriend) and my family constantly ask me about it, but they understand the lure and possibilities of playing in Europe.”