Talking about a player’s heart used to mean describing the passion and emotional dexterity the athlete brings to hockey. 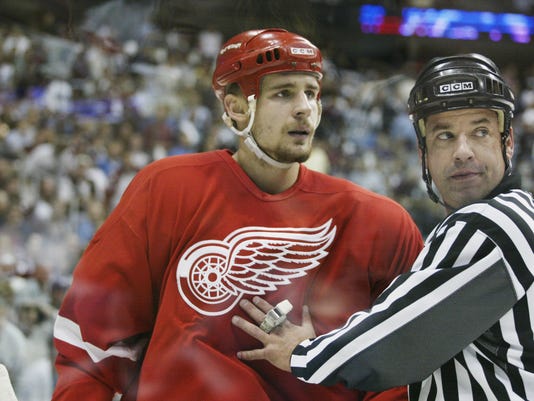 Jiri Fischer is pictured while playing for the Red Wings in 2002.(Photo: Jeff Vinnick, Getty Images)

Traverse City — Talking about a player’s heart used to mean describing the passion and emotional dexterity the athlete brings to hockey.

Now, the Red Wings are using technology to monitor some of those characteristics as their prospects mature.

The collective bargaining agreement between the NHL and players association labels the camps occurring this month around the league “physical testing and development camp.”

This year, team officials pushed the testing aspect to a new level.

Each of the 39 players wore a heart-rate monitor throughout camp, during on and off-ice workouts, skills training, practice, and scrimmages.

“This year for the first time we had everybody wired on heart-rate monitors, through all of the fitness activities we’ve had on and off the ice,” said Jiri Fischer, director of player development.

“So, we also get a base of where guys are: Do they recover fast enough? Can they stay calm while they are exercising vigorously? How do they bounce back from being completely fatigued?”

Heart monitors are familiar tools by now. Casual athletes use them to take rudimentary workouts to the level of advanced training.

Treadmills and stationary bikes at many gyms provide the monitors.

The heart rate measures the number of times the heart contracts, usually per minute.

Assessing high heart rates at the point of extreme exertion provides an individualized measurement of how well an athlete is tolerating a new training regimen, for example.

Tracking how well the heart recovers is a way of measuring the sort of accumulating fatigue that can lead to injuries, especially one of the highest occurring afflictions in hockey: groin problems.

In addition to injury, not monitoring a player might prevent maximum performance.

During camps, especially for those attending for the first time as recent draft picks or invitees, pressure can vie with physical exertion for demands on the heart, and that can be evaluated as a measure of psychological traits, including susceptibility to stress, Fischer said.

“There’s obviously pressure that players had to deal with, whether it’s the first time wearing the logo and being part of the Red Wings organization, the Red Wings brand and the culture we try to instill, to Ken Holland watching,” Fischer said.

“We really try to get across that everything is a competition and that there’s always only one winner.

“And also these were long days for the players. The first day, they got to the rink at 8 o’clock in the morning, guys really got less than an hour off in the afternoon and we finished close to 9 o’clock at night — and then goes into another very intense practice day and then an intense scrimmage day, which I believe creates the emotional high for lots of players.”

Through it all, the rates of all 39 hearts were meticulously measured.

Krupa: Blashill likes Wings' moves but wants to get better

Fischer was forced to retire as a player because of some abnormal heart rates, which have been detected over time, including during a game with the Predators on Nov. 21, 2005, when he went into cardiac arrest.

Doctors say the exact cause of Fisher’s collapse remains unknown, but it may have been either a ventricular tachycardia, a racing heart beat, or ventricular fibrillation, a fluttering heart.

Such conditions are normally detected during team physicals, which all of the players at development camp undertook the first day of the session.

As he did during scrimmages and drills, Cholowski impressed during the tests of his heart rate.

“For Dennis, coming in, I absolutely love his demeanor and the mentality that he has of no extreme highs and no extreme lows,” Fischer said.

This year especially, Fischer could back up those assertions, based on watching the player in a myriad of situations and getting to know him, with medical evidence from monitoring the heart rate.

“He was one of the guys that has a natural gift of not being overly hyper,” Fischer said.

“I believe that great players develop themselves.

“And as he’s getting closer to the pinnacle of hockey, and hopefully starts knocking on the door of (being a) pro, whenever he decides to turn pro, then I’m excited to watch his game develop.”

Cholowski and some others who stood out at the camp will be at training camp this summer.

Holland, Fischer and Jeff Blashill will likely get a bit more of a look at some of the younger players because nine veterans will attend the World Cup tournament in Toronto instead: Justin Abdelkader, Dylan Larkin, Alexey Marchenko, Niklas Kronwall, Frans Nielsen, Petr Mrazek, Tomas Tatar, Thomas Vanek and Henrik Zetterberg.

Blashill cautioned against early evaluations based on development camp.

“This is really the first look, for me, at all the guys we’ve drafted,” he said.

“I think you’ve got to take everything with a grain of salt. You don’t want to get too excited or too down.

“I’ve seen guys in this camp be very, very bad. I don’t want to name names, but then they’re playing for our team, right now.

“It can be very, very deceiving.”