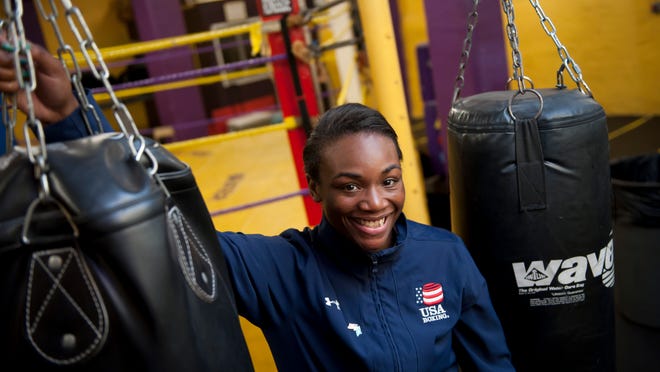 Flint – Claressa Shields is an adult now, and you can hear it in her voice just as easily as you see it in the ring, where her dominance as the top amateur boxer in the world continues to grow. There’s more polish, and more power, but still no pulled punches.

She’ll always be a fighter — raw and real and hungry for more. But four years after making history in London — the Flint native became the first American woman in history to win Olympic boxing gold in 2012 — Shields is seeing the big picture now, even as she braces for an encore performance at this month’s Rio Olympics.

Shields was 17 in London, a high school junior fighting women nearly twice her age as her sport made its Olympic debut. And as a chaotic childhood culminated in a final round few could’ve anticipated, it was as if she’d been given a standing eight-count. Back home in a cramped, cluttered bedroom in Flint, Shields would close her eyes at night and see nothing but black.

“I didn’t really see a future,” she admits now, reminiscing during a midsummer visit to the basement gym at Berston Field House where she started this Olympic odyssey a decade ago. “The only thing I’d seen was boxing. From the age of 13 till 17, my dream was to win the gold medal. I did that. And that was where my life stopped. I didn’t think past that.”

But life goes on, and for Shields, the improbable journey — from a broken home to breaking barriers — was only just beginning. She returned to Flint and finished high school, as awkward as that felt. (“Who goes to school after winning an Olympic medal?” she laughs now.) She tried to help her family, including her mother — whose personal struggles with addiction, along with her father’s long prison stint, forced Shields into a transient life from a young age — and her two younger siblings. She did what she could for her older brother, Artis Mack, still incarcerated in a Jackson-area prison on felony assault and weapons charges. She even became a mother briefly, before a planned adoption of her cousin’s infant daughter fell through.

But while she watched other Olympic gold medalists cash in after London — gymnast Gabby Douglas, for one, raked in millions — Shields found neither riches nor fame, only frustration. She split with her coach, shuffled through agents, and eventually enrolled at Olivet College hoping to find some stability away from Flint. Yet as wide-eyed hopes for a professional career quickly stalled, Shields ultimately decided to set her sights on Rio, moving to Colorado Springs to work with USA Boxing coaches at the U.S. Olympic Training Center. (Billy Walsh, the former coach of Ireland’s successful national team, signed on last fall.)

What she wants to be now is a two-time Olympic middleweight champion, a quest that will begin in 10 days in Rio, as Shields — already a reigning two-time world champion with a 74-1 amateur record — gets back to doing what she does best. And on a 555-member Team USA roster that’s once again expected to top the medal count in Brazil, there aren’t many individual athletes who’ll be heavier favorites to bring home the gold than Shields.

“It feels great going to tournaments knowing everyone knows who Claressa Shields is and what I’ve done,” said Shields, who hasn’t lost a bout since May 2012. “But people don’t know how hungry I really am. I’m super hungry. That’s why I don’t lose. I go in and I fight every girl like she’s a world champion. … I don’t care what level fighter you are, you’re always gonna get the best of Claressa Shields. So either bring your A-game or you’re gonna get knocked out. That’s just how it is.”

As it is, Shields remains her biggest critic in the ring. (“I’m not just honest with other people,” she says, “I’m honest with myself.”) And amid the pre-Olympic hype, her father, Clarence, who lives in Arizona but talks to her regularly on the phone, knows the truth. “All this stuff is fine,” he said. “But she just don’t want to miss time in the gym. She’s got more work to do.”

She’s taller now, pushing 5-foot-10, and stronger and faster than she was as a teenager, thanks in part to the training she’s doing in Colorado Springs, as well as an improved diet. Still, it’s that hunger — fueled by perceived slights — that drives her, almost literally.

But, she adds, “Good things come to those who wait, and I’ve been waiting a long time.”

By all appearances, her time is coming, though, as one of the higher-profile athletes in Rio. She’s one of 19 members of the U.S. team returning to defend an individual gold medal. And in the months leading up to the Olympics, major outlets like ESPN and HBO have broadcast in-depth profiles. (Shields even posed nude for ESPN’s annual “Body Issue” this summer.) Laila Ali, daughter of the late Muhammad Ali and an inspiration for Shields, interviewed her for CBS. The award-winning documentary about her Olympic journey — “T-Rex: Her Fight for Gold” — will air on PBS at 10 tonight. And six months ago, Universal Pictures acquired the rights to produce a feature film about Shields’ life story.

“There’s gonna be more for her this year than the first go-around,” said her agent, Jamie Fritz, whose Fritz Martin Management firm represents a variety of athletes, including a handful of pro football Hall of Famers. “Brands have options. There’s a lot of sports. There’s a lot of athletes. And I think the misconception is that just because you play a sport at a very high level that you’re automatically going to get all of these deals. We see it in the NFL all the time.

“The idea that just because you won a gold medal you’re going to get all of these deals, I mean, we win a lot of gold medals. How many gold medals did the U.S. win in London? And we only had a handful of those athletes that got endorsement deals.”

Michiganians at the Rio Summer Olympics - An interactive map

​View an interactive map of the Michiganians in the Rio Olympics here (Note: Due to technical issues, Android users may be unable to view the graphic at this time. Please view it on a desktop or compatible device.)

Still, there aren’t many with Shields’ backstory, which is always a part of the equation. Corporate America is looking for athletes with broad appeal and an ability to influence consumers. But they’re also looking for a hook, and Shields, who already has added endorsement deals with Powerade and Dick’s Sporting Goods, certainly has one.

The story is old news back in Flint by now. Shields started boxing at 11 after pestering her father — a former boxer himself, and a man who’d spent seven years of her childhood in prison for robbery — to let her try. A few years later, she was still the only girl in the gym, but as she went toe-to-toe with older boys in sparring sessions, her Berston coach, Jason Crutchfield, who’d later become a surrogate father to Shields, quickly realized “she was the one.”

“One of the things that I love about Claressa and her story is that she’s such an inspiration to young kids,” Fritz said. “She’s living proof that if you set your goals high and you work for it, anybody can rewrite their story. You can create your own opportunity, but you’ve got to start with setting goals and hard work. Nothing in life comes easy — that’s the message. And I think it’s a powerful one.”

The Flint touchstone certainly has drawn attention this past year as the pre-Olympic buildup began. Even though she has moved away, she’s still connected to the city and its well-publicized problems. When President Barack Obama visited Flint to address the water crisis, it was at her high school (Flint Northwestern) that he spoke, telling the crowd, “Don’t lose hope,” and it was her sign — the one that reads, “Home of Claressa Shields — 2012 Olympic Gold Medalist” — out front.

“To look at where I came from to where I’m at now, I think it’s great for people to actually see that, to know that I’m from here,” Shields said.

Time to ‘be great again’

But sitting on her mother’s front porch on the city’s north side, with a burned-out house next door and vacant lots overgrown with weeds dotting the neighborhood, she needs no reminders herself. She has experienced the poverty and violence firsthand, and though she plans to move to Florida — bringing her immediate family with her — after the Olympics, with plans to finally turn pro, “I don’t ever feel like I’m losing touch with home.”

“Even though I don’t live here anymore, I still want to come back and help the community, help those in poverty, help those who go through having to deal with family being murdered or parents being put in jail,” she said. “I want Flint to be known as a place of resilience. I hope we can overcome all this and become a great city again.”

In Rio, where the U.S. boxing team arrived last week, it’s time for Shields to “be great again, and be better than I was four years ago.”

That’s how she’ll get what she deserves, she insists, and how she’ll make her own sales pitch.

“I always want people to know you can make it, no matter where you come from, who your parents are, what you went through as a kid — it doesn’t matter,” Shields said. “That’s why I say I don’t look back. Keep looking forward. There’s no reason to look back.”

The Rio Games begin Wednesday and Thursday with soccer matches, but the real fun starts Friday with the Opening Ceremony and runs through Aug. 21. And every day you can keep up with the news and get the inside scoop from Brazil courtesy of columnist John Niyo in The Detroit News, at detroitnews.com, and on Twitter at @JohnNiyo.

Every step of Claressa Shields’ remarkable journey from Flint to Olympic glory in 2012 was captured by a group of documentary filmmakers who turned her story into an award-winning film — “T-Rex: Her Fight for Gold” — that will make its nationally televised premiere on PBS at 10 tonight. But first, watch the trailer.