Rio de Janeiro — Simone Biles put the finishing touches on one of the greatest Olympics by a gymnast ever, capturing her fourth gold of the games with a showstopping performance in the floor exercise.

The 19-year-old American on Tuesday completed an extraordinary stretch that included a team gold for the “Final Five” as well as individual golds in the all-around and vault and bronze on balance beam.

Her five medals tie the most for an American woman in a single Olympics and her four golds tie an Olympic record shared by Larisa Latynina, Vera Caslavska, Ágnes Keleti and Ecaterina Szabo.

Biles embraced longtime coach Aimee Boorman shortly after her routine, which includes a tumbling pass named in her honor and a Brazilian-themed segment intended to play to the crowd in Rio. She beamed when her score of 15.966 was posted.

Teammate Aly Raisman followed with a 15.500 silver-medal performance to give her a third medal during Rio and six overall in her Olympic career.

The Germans play the winner of the night semifinal between the Americans, Kerri Walsh Jennings and April Ross, and the No. 2 Brazilian team of Agatha and Barbara.

Verniaiev’s score of 16.041 was just a touch better than the 15.9 put up by American Danell Leyva. Russia's David Belyavskiy earned the bronze.

The silver by Leyva was the first Olympic medal by an American on parallel bars since 1996. A bronze medalist in the all-around four years ago, Leyva was originally an alternate on the 2016 team before stepping in after John Orozco was injured during training in the weeks leading up to the games.

Hedvig Lindahl made two saves and Lisa Dahlkvist converted the final penalty as Sweden defeated host Brazil, 4-3, in a shootout to reach the final of the Olympic soccer tournament for the first time.

Cristiane and Andressa had their shots saved by Lindahl at the packed Maracana Stadium. Brazil goalkeeper Barbara stopped the shot by Kosovare Asllani.

The teams drew 0-0 after regulation and extra time.

Brazil was trying to win the women’s soccer gold for the first time. It twice won the silver, in 2004 in Athens and 2008 in Beijing. Brazil was eliminated by Japan in the quarterfinals of the London Olympics four years ago.

Canada and Germany will play the other semifinal.

Sweden ousted the U.S. women's soccer team in penalty kicks in the quarterfinals.

Usain Bolt glanced to his right once, twice, three times. No surprise: Nobody was there.

That’s how the quest began for his final individual sprint gold at the Olympics — a jog through the sunshine in the opening round of the 200 meters and a stress-free victory in the ninth heat of qualifying.

He finished in 20.28 seconds, a time that means nothing. More importantly, he coasted into the finish line after triple-checking on Nigeria’s Ejowvokoghene Oduduru simply to make sure nothing crazy was happening

Bolt will run in the semifinals Wednesday, and if that goes as expected, he’ll be lining up for gold medal No. 8 on Thursday night, where the biggest drama may not be whether he wins, but whether he cracks the once-thought-untouchable 19-second barrier. He already owns the world (19.19) and Olympic (19.30) records.

Others who will challenge him include American Justin Gatlin and Canadian Andre De Grasse, who finished 2-3 to Bolt in the 100, along with American LaShawn Merritt. They all won their heats on a muggy, sun-splashed day in a stadium with huge swaths of empty blue seats. 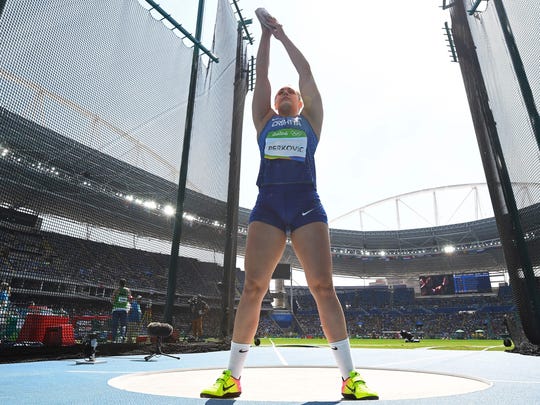 ... Sandra Perkovic stared early elimination in the face twice in as many days, and came through with her second Olympic gold to show for it.

Perkovic was in real trouble in Tuesday’s final after she threw the discus in the protective netting on her first two attempts, and she jumped up and down in the circle in frustration.

But she had the discus throw of the Rio Olympics with 69.21 meters on her third attempt. Her plight had been identical in Monday’s rainy qualifying, when she threw her only legal mark in her last attempt.

Melina Robert-Michon was just as happy Tuesday with her French record of 66.73 meters for the silver.

... Christian Taylor and Will Claye have done it again, sweeping gold and silver in the triple jump for the United States at back-to-back Olympics.

Taylor successfully defended the Olympic title he won in London in 2012, setting down the benchmark with a season-leading mark of 17.86 on his first attempt. He posted the three best jumps of the competition.

Claye finished with silver again with a personal record of 17.76. He also won a bronze in the long jump at London, when he was the first man since 1936 to win medals in both the horizontal jumps. 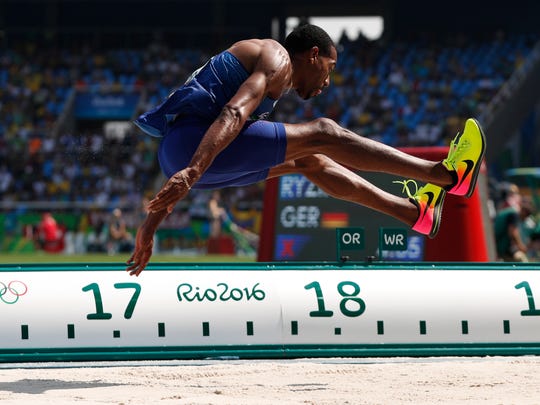 Netherlands finished off a sweep of the open water swimming races with a thrilling victory in the men’s 10-kilometer race.

Ferry Weertman captured the gold medal at Copacabana after Greece’s Spiros Gianniotis crossed under the finish line first but reached up after the Dutchman to touch the timing pad.

That gave the victory to Weertman in a time of 1 hour 52 minute 59.8 seconds, one day after Sharon van Rouwendaal took the women’s race for the Netherlands.

Gianniotis missed a chance to give Greece its first swimming gold since the inaugural Olympics in 1896.