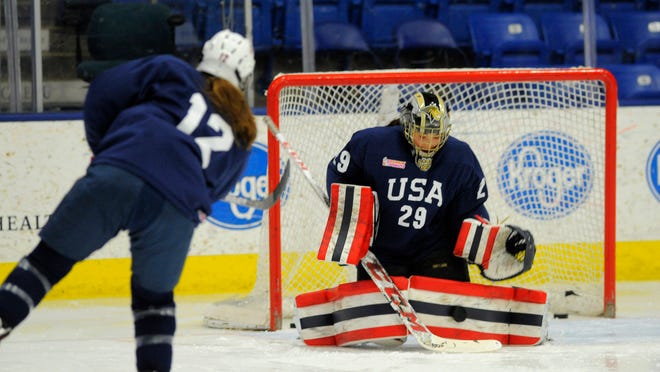 They are among the finest players in the world. If the coming months go as expected, beginning in March, they will play in their native state for the world championship.

Darkangelo, a forward for the Buffalo Beauts of the National Women’s Hockey League, and Keller, a Boston College defenseman, are skating with the best woman players in the United States this week at USA Hockey Arena.

USA Hockey’s four-day Winter Camp is in advance of two exhibitions Saturday and Monday between the United States and Canada, the titanic nations of what is known formally in international play as women’s ice hockey.

“Anytime Team USA plays Canada, it’s always a battle because they have a lot of talented players and they are always a hard-working team,” said Keller, an all-American as a sophomore last season for the Eagles.

“But I think one of the things we’re focusing on is this team and what we can do, because if we can be at our best and out work everybody, I don’t think anyone can stop Team USA.”

The second game is at 7 p.m. Monday in Sarnia, Ontario.

Darkangelo, a Royal Oak native, and Keller, a Farmington native, are getting ready.

They both played for the 2016 world champions when the U.S. defeated Canada, 1-0, in overtime April 4 in Kamloops, British Columbia.

Now they are preparing for the two “friendlies” against their archrivals, while pointing toward the 2017 International Ice Hockey Federation’s World Championships from March 31-April 7 at USA Hockey Arena.

The squad selected from the invitees to the women’s camp ensconced in the sprawling, renovated USA Hockey Arena — the former Compuware Arena — will play in the two-game tournament, and likely have a leg up on making the World Championships team.

Members of that roster will have an advantage for the Olympics.

And they all want to beat Canada.

Darkangelo said the importance of the camp is the team.

“I think right now we’re just focusing on our style of play and trying to get better when we’re together, here, since we don’t come together collectively that often,” said the former star at Syracuse and Quinnipiac.

The National Women’s Hockey League, with franchises in Boston, Buffalo, Connecticut and New York, is the first league in the United States for women.

The Boston games are broadcast regionally on NESN.

“There’s a lot of hard work that goes into it, obviously,” she said when asked for advice for girls playing hockey. “But growing up, I would say play different sports and do different things just to be active.

“I did start playing hockey at a young age. But I didn’t just play hockey.”

Darkangelo mixed in some lacrosse, soccer and dance in her early years.

“I think it makes you more diverse and more athletic,” she said

But in high school, she narrowed it to hockey and lacrosse, making time for a skills coach in hockey and her studies.

With no major college program for women in Michigan, she headed to Syracuse intent to concentrate on her one sport.

“I chose to play hockey in collage and so, from then, it’s all hockey from there out, until now,” she said.

Keller said everyone has an individual path to success in hockey.

“But one of the major things is just to stick with it, and another major thing I’ve carried with me throughout my career is just a love of the game,” she said.

“It’s something that all of us here have,” she said of the players at the camp. “Because we wouldn’t be here if we didn’t have it.

“Because you love to play the sport, that’s why you do these things,” Keller said, referring to the long hours of work and travel. “That’s why you accomplish what you can.”

Keller grew up playing with the boys of the Farmington Fire in Little Caesars, and the Knights of the Livonia Hockey Association.

And then, after what she calls “a few years of checking,” she switched to girls and played in HoneyBaked until she went to Boston.

As one of her role models, the great Olympian and member of the Hockey Hall of Fame Angela Ruggiero says, playing with the boys helps establish toughness.

“I think so,” Keller said. “I mean, I have an older brother, so you learn real quick to hold your own and have that stronger mentality.”

Her older brother, Ryan, played at Michigan State from 2012-16

“I like to think I bring a physical aspect to my game,” Keller said. “I think that’s something I developed with boys, and to be able to check for a few years.

“And then on the girls’ side, you have to be able to see the ice really well and move the puck. There’s more of a finesse.

“And there’s a lot of skilled players, and it’s faster, and that’s something I learned playing for HoneyBaked and now at Boston College.”

Keller has another Spartans connection. One of her best friends and teammates growing up was Andie Anastos, daughter of Michigan State hockey coach Tom Anastos.

Did the lack of a major women’s program in intercollegiate hockey in Michigan hamper Keller’s development?

“Obviously, it would have been a pretty neat experience to be able to carry out my career in Michigan,” she said. “But I don’t necessarily think it hindered my development because there are so many great players all over the world.

“And being able to go to a school like BC has been an amazing experience for me that I wouldn’t trade for the world.”

Tickets: $15 for Saturday’s game available at the door and at USAHockeyArena.com