Tyler Moorman's shot into the upper right-hand corner of the net in the 86th minute handed Detroit City FC a 1-0 victory before 5,067 at Keyworth Stadium.

Detroit City FC fans walk along Jacob Street as they participate in the 'March to the Match' from Fowling Warehouse to Keyworth Stadium to face Glentoran FC (Ireland) on Saturday, May 27, 2017 in Hamtramck. Jose Juarez, Special to Detroit News
Fullscreen

Detroit City FC fans walk along Roosevelt Street as they participate in the 'March to the Match'. Jose Juarez, Special to Detroit News
Fullscreen

Detroit City FC fans walk along Roosevelt Street as they participate in the 'March to the Match'. Jose Juarez, Special to Detroit News
Fullscreen 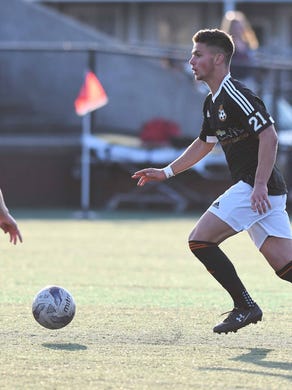 Detroit City FC midfielder Jeff Adkins (8) is knocked off his feet by an unidentified Glentoran FC player during the second half. Jose Juarez, Special to Detroit News
Fullscreen

After the Detroit City FC players were congratulated by their fans, those same Detroit fans stayed to thank the Glentoran FC players for traveling from Belfast, Ireland to play this friendly match. Jose Juarez, Special to Detroit News
Fullscreen

Hamtramck – Tyler Moorman's blast into the upper right-hand corner of the net in the 86th minute celebrated 50 years of Motor City soccer history, handing Detroit City FC a 1-0 victory over Irish League side Glentoran FC in a friendly Saturday before 5,067 at Keyworth Stadium.

Moorman's strike capped off a 10-minute flurry by Detroit City FC, which peppered the visitor's net and saw a Jeff Adkins penalty kick saved three minutes earlier by Glentoran goalkeeper Dwayne Nelson after Moorman was dragged down in the box.

The anniversary match celebrating the Detroit Cougars, who were represented by East Belfast's Glentoran FC and played in the United Soccer Association, lived up to the historical significance.

Moorman, who plays at Detroit Mercy, came on as a sub in the 66th minute and made his presence felt. His left-footed strike into the upper corner appeared to be the only way Glentoran’s shot-stopper was going to concede.

“I think even though he is a big guy (6-foot-3) he has very soft feet,” Detroit City FC coach Ben Pirmann said. “He did very well to draw the penalty a few minutes before and he did very well on the goal to stay on top of a loose ball, a rebound and a deflection and did a very good job ... and hit a perfect shot into the top corner."

For his part, Moorman seized the chance after Nelson saved Adkins’ initial shot on goal.

“Our defense did a great job winning the ball and getting it up to our forwards,” said Moorman, who returned after missing a week due to a foot injury. “It was Jeff Adkins who had a shot on goal where the keeper made a great save. The ball just came back to me and I was one-on-one with the defender. I just touched it past him and finished.

“It all started with the defender winning the challenge.”

The outcome could have been different had not DCFC goalkeeper Colin Miller bravely dove at the feet of onrushing Glentoran midfielder John McGuigan early in the second half. Miller grabbed the ball before spilling and then recollecting the ball.

Detroit City FC had three chances on goal early in the second half, including an audacious chip by midfielder Tommy Catalano in the 65th minute that the Glentoran keeper was able to deflect.

Glentoran goalkeeper’s finest moment was saving Adkins’ penalty, diving to his right to deny the Le Rouge’s veteran midfielder in the 83rd minute.

“I thought we created more chances, but a lot of times in our sport it can be that way and those games can end 0-0 or even you can get too open they can counter and it can end up in a loss,” Pirmann said.

“I was telling them throughout the week you have to continue to trust the process. ...If you keep playing the same way for 90 minutes and we work hard it will even out.”

Detroit City subbed throughout the friendly. Glentoran had a much shorter bench.

“Our players are not used to this warm weather,” said Glentoran manager Gary Haveron, whose team completed its season a month ago.

James Ferrin's lofting header off a cross pressed Le Rouge's Miller into action in the 43rd minute in a scoreless first half.

Le Rouge's Owain Hoskins collected a yellow card after his collision laid out McGuigan late in the first half, accounting for the match's few rugged moments. DCFC's Anthony Franco (50') and Glentoran's Jonathan Smith (52') and Ferrin (58') were booked in the second half.

Glentoran FC, which cleaned house at the end of the Irish League season after finishing ninth and 43 points behind first-place finishers Linfield, gave debuts to new signings midfielders Corey McMullen and McGuigan and defender Daniel Kelly.