Is WrestleMania ready to return to Detroit?

Correction: This story has been changed to correct the spelling of Shawn Michaels' name 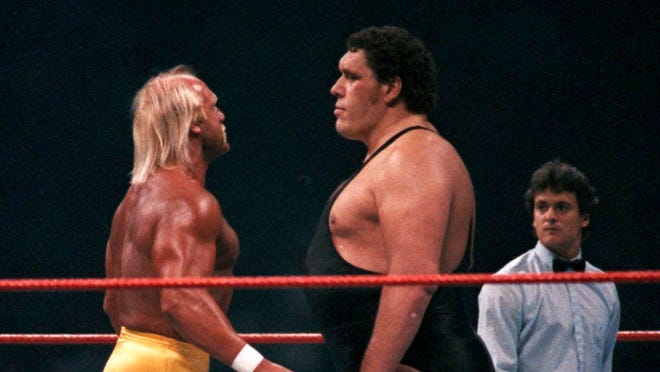 Detroit — This city’s obsession with big-time wrestling — or rasslin’ — goes back decades, from Dick the Bruiser at Olympia Stadium and The Shiek at Cobo Arena to Hulk Hogan and Andre the Giant's staredown at the Silverdome, John Cena and Shawn Michaels at Ford Field to Shane McMahon’s high-flying antics last month at Little Caesars Arena.

And that's just the tip of the iceberg when it comes Detroit's iconic wrestling scenes — many of them, of course, conveniently never seen by the referee.

Now, is World Wrestling Entertainment ready to add another chapter to the love story?

There is rampant speculation floating around the Internet that WWE is preparing to bring WresteMania back to Detroit for the first time since 2007. Two wrestling blogs, Wrestlezone.com and ProWrestlingTimes, wrote as much this week.

Both suggest WrestleMania 35, scheduled for spring of 2019, appears headed back to Ford Field, apparently having beaten out other top contenders like Philadelphia and New York.

If correct, this would be the Metro Detroit area’s third WrestleMania, after hosting the third installment at the Pontiac Silverdome in 1987 and WrestleMania 23 at Ford Field in 2007. Those were two of the four highest-attended WrestleManias in history, with No. 3 drawing an alleged 93,173, a record that stood for decades, until 100,000-plus attended No. 32 at Cowboys Stadium in Arlington, Texas, in 2016.

More: Larger than life — an oral history of WrestleMania III

The WWE likes to announce such things on its own time frame and hasn’t said a peep about WrestleMania 35. WrestleMania 34, in 2018, is scheduled for the Superdome in New Orleans, and the New Orleans announcement was made in January 2017.

A representative with the Detroit Sports Commission, which crafts and submits proposals to host some of the nation's most-marquee sporting events, told The Detroit News on Monday night that it never submitted a bid for WrestleMania 35, but had targeted other WrestleManias in recent years — including Nos. 33, which took place in Orlando, Fla., in April, and 34. The DSC hasn’t received word from anyone at WWE about possibly hosting No. 35.

An executive at Ford Field didn’t respond to a request for comment Monday afternoon.

Several factors work in Detroit’s favor, particularly the proximity to Canada, making it easier on international travelers, and the booming downtown, with The District Detroit, anchored by new LCA. The arena could provide the infrastructure WWE needs for its peripheral events typically associated with WrestleMania. That also could cause a complication, though, as the Pistons and Red Wings both would need to be on the road for an entire week. WWE would probably need LCA for its Hall-of-Fame induction ceremony Friday (held at Fox Theatre in 2007, but it's since been upgraded to an arena setting), "NXT TakeOver" (Saturday), "Raw" (Monday) and "SmackDown Live" (Tuesday), sandwiched around WrestleMania (Sunday)

The two WrestleManias in Detroit are known for two of the most-memorable scenes in the sports history.

At WrestleMania 3 on March 29, 1987, Hogan, champion of what was then the World Wrestling Federation, bodyslammed the Giant, who, as the story line insisted, weighed some 525 pounds. The sport’s historians, though, will insist the match of the night — and one of the best of all-time — was the marathon, acrobatic display put on by Randy “Macho Man” Savage and Ricky “The Dragon” Steamboat.

And at WrestleMania 23 on April 1, 2007, where several Detroit Tigers sat ringside, the future president of the United States, Donald Trump, was a big part of the show, even getting to shave WWE owner Vince McMahon’s head following a “Battle of Billionaires” match — they didn't wrestle, but picked wrestlers to represent them — before “Stone Cold” Steve Austin dropped Trump with the “Stone Cold Stunner.”

“A Detroit crowd is one of the most passionate crowds. They can be your best friend or they can be your worst enemy,” four-time WWE champion Kurt Angle, also a former Olympic gold medalist, told The News earlier this year. “The one thing about them in Detroit is they know talent when they see it. If you prove to them that you’re that good, they’re going to appreciate it. They’re some of the smartest fans in the world.”

The possibility of WrestleMania returning to Detroit could disappoint one hard-core fan, Michigan football coach Jim Harbaugh, who floated the idea in 2015 of bringing the spectacle to Michigan Stadium in Ann Arbor. WrestleMania rarely is held at outdoor venues, and when it is, it's been in warm-weather locales.