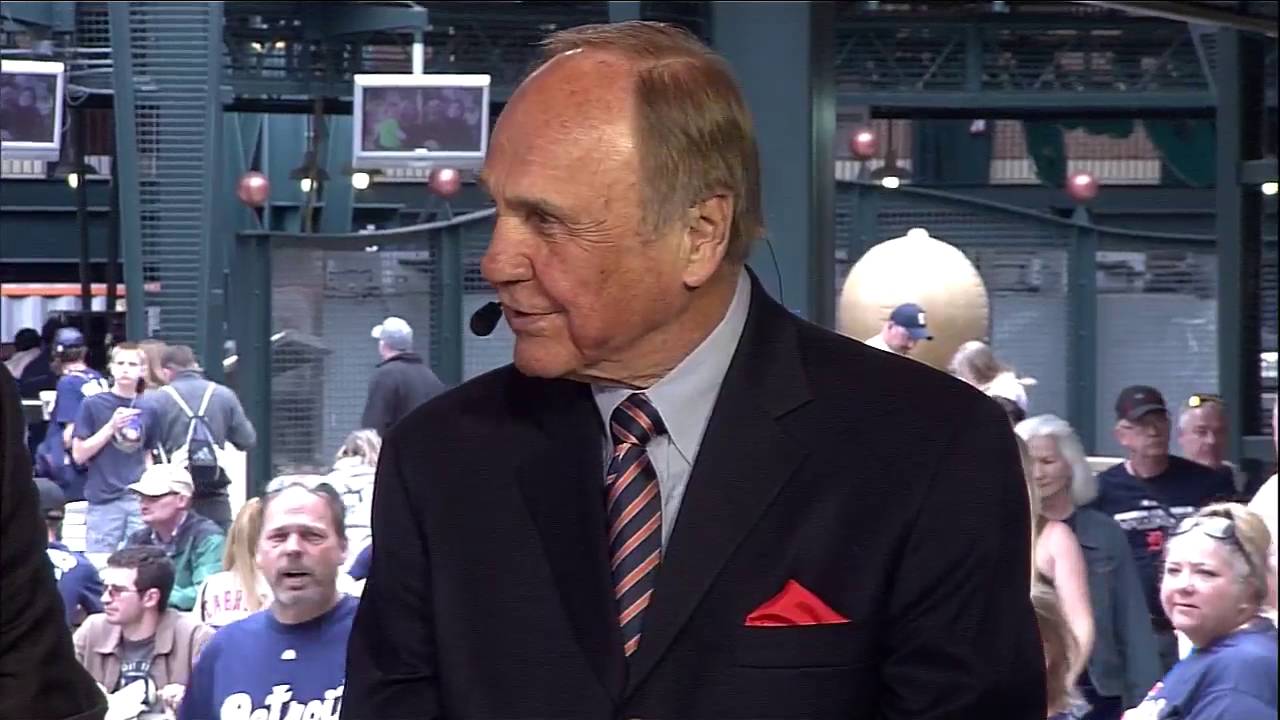 Dick Enberg may have formally retired from full-time baseball broadcasting following the 2016 season.

But he still kept up with his favorite game, and when his San Diego Padres made a trade with the Philadelphia Phillies last week, he tweeted — yes, tweeted — his analysis, capped by his signature phrase, "Oh, my!"

Enberg, the Michigan-born broadcaster whose rise to fame included a childhood spent on the farms of Armada, Mich., and a college education at Central Michigan University before he went on to a Hall-of-Fame career, died Thursday at the age of 82. He suffered a heart attack at home in La Jolla, Calif.

Enberg grew up an Armada Tiger and a huge Detroit Tigers fan, and he always wanted to be Al Kaline, he said on numerous occasions. They were born less than a month apart — Enberg in Mount Clemens, Kaline in Baltimore — but there was only one Kaline, who signed with the Tigers as an 18-year-old. There, too, was only one Enberg, who turned to the next best thing, and that was broadcasting.

More: Dick Enberg: From Armada to CMU to Cooperstown

During his swan song from full-time broadcasting in 2016, he was invited to broadcast a Tigers game at Comerica Park, as his old friends gathered at the Lions Club in Armada for a watch party. And in 2017, after he officially retired from doing Padres games, the Tigers invited him back, to work an August Tigers-Dodgers series at Comerica Park. He worked alongside Kirk Gibson on both occasions, and was in heaven.

But even though they were seen as ceremonial appearances, Enberg also took the appearances very seriously, preparing and researching relentlessly. Fans reviews were wildly positive.

Enberg was born and raised in Macomb County, always telling anybody who would listen that, someday, he'd be a Tiger. His father would relentlessly tease him about such an ambitious proclamation.

"Yeah, we'll all go down to Briggs Stadium someday and there will be Dick and he'll be shouting, 'Peanuts! Popcorn!'" Enberg said during his speech in July 2015 in Cooperstown, N.Y., after accepting the Ford C. Frick Award and being inducted into the broadcaster's wing of the Hall of Fame. "My friends in high school and college still remind me, 'Hey, Enberg, you only talk a good game.'

"I guess it all worked out."

Enberg first hit in big in the early 1960s, after graduating from Central Michigan in 1957 and, later, Indiana University.

He moved to Los Angeles and got a job calling California Angels baseball and Los Angeles Rams football, and was the voice of John Wooden's legendary UCLA men's basketball team.

With the Angels, he was on the mic on July 15, 1973, at his old stomping grounds, Tiger Stadium, where Nolan Ryan was no-hitting the Tigers. That game is legendary, for the folk story of Tigers slugger/class clown Norm Cash bringing a table leg — or a piano leg, depending on whose story you believe — to the plate late in the game. Umpire Ron Luciano told Cash he couldn't use that, to which Cash replied, "It doesn't matter. I'm not going to hit it anyway." Cash popped to short to end the game, Ryan celebrating the second of his record seven no-hitters.

In 1975, Enberg's profile grew as he joined NBC Sports, as he broadcast high-profile MLB, NFL, NBA, college football and college basketball games, along with such marquee events as the Super Bowl, the World Series, Wimbledon and French Open tennis tournaments, the U.S. Open golf tournament, big-time boxing and horse racing, and the Olympics. He called the 1979 NCAA championship game between Magic Johnson's Michigan State and Larry Bird's Indiana State.

His signature phrase, of course, was, "Oh, my!" and one he would work into poignant TV moments as well as the casual conversation  — with acquaintances old and new  — over the phone.

Enberg later joined CBS Sports and added U.S. Open tennis as well as The Masters and PGA Championship golf events to his resume.

"All of us at CBS Sports are saddened to hear of the passing of our friend and colleague Dick Enberg," Sean McManus, chairman of CBS Sports, said in a statement. "There will never be another Dick Enberg. As the voice of generations of fans, Dick was a masterful storyteller, a consummate professional and a true gentleman. He was one of the true legends of our business. His passion, energy and love for the game will surely be missed.  Our deepest sympathies go out to Barbara and his entire family."

Through the years, Enberg also hosted game shows and made several TV and film cameos.

In 2009, he returned to local baseball broadcasting, taking over the Padres play-by-play duties, which he continued through 2016. Always keeping up with the times, recently, in retirement, he launched a podcast.

Baseball always was his true love — his Holy Grail — and he wasn't shy about noting the ties between baseball and religion. After all, he liked to point out, he was the broadcaster of the Angels and the Padres. In 2015, he joined longtime Detroit News writer Tom Gage in Baseball's media wing of the Baseball Hall of Fame.

"My dream has taken me to a great place," said Enberg, whose early mentors included such legendary Tigers voices as Ernie Harwell and Van Patrick.

The Tigers issued this statement Friday: "The Detroit Tigers are saddened to learn that Hall of Fame broadcaster and Michigan native, Dick Enberg, has passed away. Dick has long been a member of the Tigers family — spanning from his childhood passion for the Olde English ‘D’ to calling games from the Tigers broadcast booth for FOX Sports Detroit during the 2016 and 2017 seasons. His spirit and energy will always be remembered in Detroit, the state of Michigan and across baseball. We offer our deepest condolences to Dick’s wife, Barbara, and the entire Enberg family during this difficult time.”

Enberg was a member of what same considered the Golden Age of baseball broadcasting, often mentioned in the same sentence as the likes of fellow Hall-of-Famers Harwell and Vin Scully. In 2017, he was honored with the Detroit Sports Media Ernie Harwell Lifetime Contribution Award ("The Ernie"), presented before a Tigers game in August at Comerica Park.

Meanwhile, Scully said Friday: "To me, Dick Enberg was the greatest all-around sportscaster who ever lived and will never be emulated. He was a very dear friend of mine. He had my respect, admiration and my friendship. He will be sorely missed."

Born Jan. 9, 1935, Enberg played baseball at CMU, worked at WSAM in Saginaw and was a member of Phi Sigma Kappa fraternity during his early college days in Mount Pleasant, before moving on to graduate school at Indiana, where he earned his master's degree while calling Hoosiers basketball and football games — and moonlighting as a Little League baseball umpire. He never could get enough baseball.

He was raised in Armada, at 33 Mile and North Avenue, and without many friends around, he would entertain himself by hitting rocks over telephone wires. He batted left-handed, a tribute to his childhood idol Ted Williams. When Williams' Red Sox were in town, Enberg the kid would hitchhike down to then-Briggs Stadium, making sure to arrive early enough to watch batting practice. They later became friends.

Early and late in life, Enberg — who was married to Barbara, and had three children — remained committed to Central Michigan. In 1993, he entered the Central Michigan Hall of Fame (he entered the Indiana Hall of Fame in 2006); in 2012, an Enberg bust was unveiled on the Mount Pleasant campus; and even this year, Enberg was on campus for the CMU athletic department's annual golf outing in June.

Enberg and his wife made sure to make athletic director Michael Alford feel welcome in his new job, even teaming with another CMU alumnus, Todd Anson and his wife, to match all the silent-auction donations, resulting in a banner fundraising day of nearly $240,000.

On Friday, Central Michigan added "OH MY" stickers to its football helmets for the Potato Bowl game against Wyoming in Boise, Idaho.

"Nobody carried their love for Central Michigan as far and wide as Dick Enberg," Alford said in a statement early Friday morning. "It's amazing how often he worked in his ties to CMU while on a national or international broadcast. He was an amazingly kind, thoughtful and welcoming man.

"He made a matching gift at my opening press conference at CMU, and we spoke often. I'm so fortunate to have been able to spend time with Dick, introduce him to my family and understand what an important role CMU played in his life."