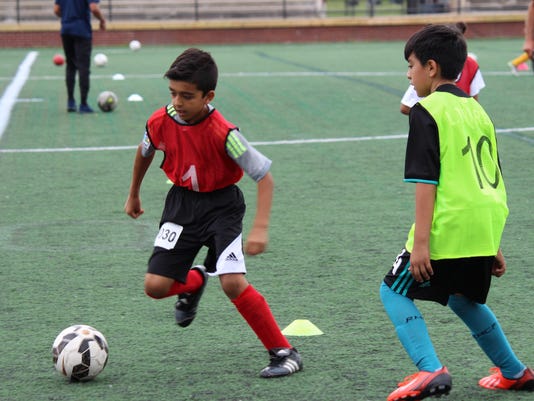 Hamtramck — Detroit City FC technical adviser Klaas de Boer waved his hand toward the children running around on Keyworth Stadium’s artificial surface as they chased an array of soccer balls before Saturday’s launch of a city-based youth initiative.

“This is the future of DCFC,” said the longtime college and professional coach and now a scout for U.S. Soccer.

They’re determined to mine and organize it.

The problem in the past has been when gifted players were discovered, their only outlet has been to join a team in the suburbs, which was often cost prohibitive for families in living in the city. 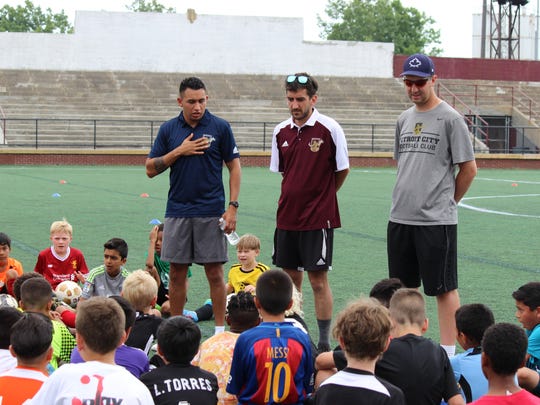 Detroit City FC/PAL Select Program coordinator Javi Bautista, flanked by coaches Adam Verville and Fish Conklin, goes over the tryout activities with the nearly 100 children who turned up Saturday at Keyworth Stadium. The program is designed to provide professional coaching and high-level competition for boys and girls at the under-10 and U12 levels who are playing in PAL. (Photo: Larry O'Connor/Detroit News)

The DCFC/PAL initiative will set up teams at the U10 and U12 level, which will compete in the Michigan State Developmental Soccer League during the fall and spring/summer seasons.

Between outdoor campaigns, training sessions and indoor leagues will take place at the new Detroit City Fieldhouse on Lafayette.

During the past year, DCFC coaches and players have visited Detroit Public Schools, private charter academies and parochial institutions in an effort to identify candidates for the select program.

Nearly 100 boys and girls turned out for Saturday’s tryout, which was supervised by program staff and DCFC players.

"We're going to develop those kids,” said Adam Verville, who serves as U10 coach. “Hopefully, we're going to find them as 6 and 7 year olds with some competitiveness and some athleticism, and then it's really up to them and the level and passion they bring to the game.

“There is no shortage of athletes in this town."

Shatinka Skinner of Detroit stood with camera phone in hand, documenting every touch son Derek, 8, had on the ball. She was one several parents who watched from the west stands as the 4 vs. 4 games took place.

The Detroit Achievement Academy student plays in PAL’s GOAL Detroit Soccer League, which is an after-school program developed by the U.S. Soccer Foundation. The boy, who’s taken part in both the league’s fall and spring sessions, is smitten with the sport, the mother said.

“I definitely think with the resurgence of the city, it’s good to see them focusing on other sports instead of just basketball, football and baseball,” Skinner said. “I think it’s good they are pulling in other sports like soccer.”