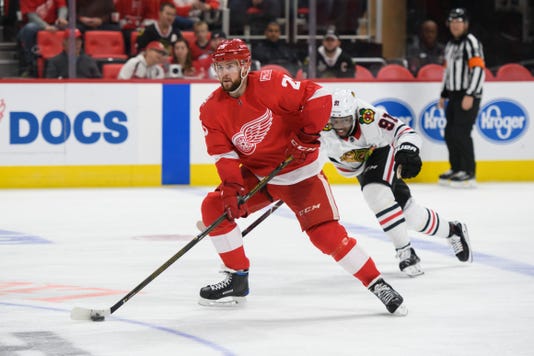 With training camp approximately a month away, sports writer Ted Kulfan will analyze each of the Red Wings’ position groups in upcoming days. Today: Defensemen.

Detroit — Mike Green could have gone elsewhere, maybe for more money, but there really wasn’t any thought of doing so.

Despite his name being a fixture in rumors since the February trade deadline — he had his choice of several contending teams — Green had another idea in mind.

He wanted to stay in Detroit.

“I love it there in Detroit, I really do,” Green said, upon re-signing July 1 with the Red Wings on a two-year contract worth $10.75 million. “I love the organization, love the culture, I love the guys.”

Green is coming off neck surgery which ended his season in the final weeks — and scared off teams at the trade deadline — but he said he’ll be ready for day one of training camp in September.

The surgery didn’t scare off the Red Wings, who figure Green is a fine mentor for a several prime prospects not far from the NHL.

Green led Wings defensemen with 33 points (eight goals, 25 assists) in 66 games, and is a key figure on a position group that will look awfully similar to last season — which could be a concern.

More: Wings' young goaltenders are a long way from ready

The Wings are another year older on the blue line, have trouble getting the puck out of their zone, and don’t get enough offense out of their defense (although there was improvement the second half of the season).

An infusion of new talent will begin this season, and likely continue in the near future — another reason Green was important to sign, given his ability to mentor younger defensemen.

“In a lot of ways he was one of our top defensemen on a lot of nights, and he’s a big-time winner who is a great example for our younger guys in the locker room,” coach Jeff Blashill said.

Said Green: “I feel I can help the younger guys develop quicker and speed up that process.”

One, maybe two, will break through this camp, given the way the defense’s depth chart is constructed.

“It’s easy to say one is going to be on our team and if we have two (young defensemen) push to be on our team, that means they’ve beat out good players and we’re a better hockey team,” Blashill said. “We’re not handing jobs. But if they end up beating players out, the theory is, we’re better because of it.

It won’t be easy to land more than one defenseman’s spot, as six of the positions appear all set.

Kronwall has been a longtime top-tier defensemen who has slowed in recent years because of knee issues. Kronwall has persevered through them, but age has caught up with him.

Another key could be DeKeyser, who signed a six-year contract extension worth $30 million in 2016 but has, arguably, not met expectations that accompany that salary.

But, collectively, the group keeps getting older, and its age is a concern that general manager Ken Holland addressed after the season ended.

“Our defense is old,” Holland said. “We haven’t done a good enough job of drafting defensemen that have been high impact. You have to draft them and develop them.”

Which is what the organization plans to do in the next few years.

“As we go forward over the next year or two the plan is to slowly move some of the young players in our system onto our team,” Holland said. “Whether they are up front, or on defense. If two young defensemen can make our team, maybe we will carry eight defensemen.” 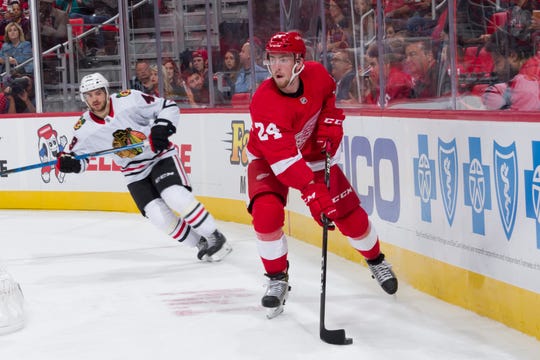 Filip Hronek is part of a wave of young defensemen vying for a roster spot on the Red Wings. (Photo: David Guralnick, Detroit News)

Here are the defensemen in the Red Wings’ organization:

Dennis Cholowski: Former first-round pick likely will start season in Grand Rapids, but not far away from NHL.

Trevor Daley: Has two years left on contract, which could make Daley very intriguing to teams at trade deadline.

Danny DeKeyser: Injury first week of season set him behind; gradually, his game got better.

Jonathan Ericsson: His size is valuable on this depth chart, but age is gradually becoming an issue.

Mike Green: Offensive defenseman who gives up nearly as much on defense.

Joe Hicketts: Smallish defenseman who plays with a lot of heart, swagger, but must improve his decision-making.

Filip Hronek: All reports raved about his progress in Grand Rapids as season wore on; can he make jump to the NHL in October?

Nick Jensen: Good depth defenseman who could be trade bait if two of the youngsters show they’re NHL-ready.

Niklas Kronwall: Heart and soul Red Wing is in final year of his contract. Has been important on, off the ice.