It took crew chief Jon Oberhofer 28 years before finally getting the chance to feel what it was like to be champion of the U.S. Nationals, the Super Bowl of the NHRA series. 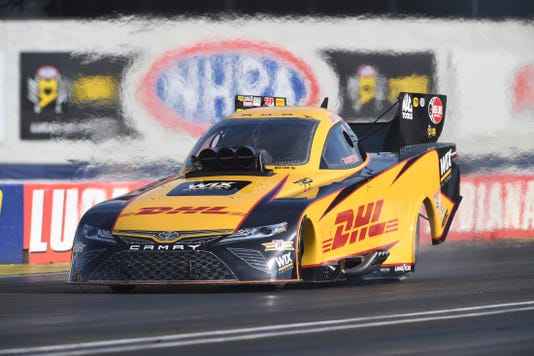 Ypsilanti – It took crew chief Jon Oberhofer 28 years before finally getting the chance to feel what it was like to be champion of the U.S. Nationals, the Super Bowl of the NHRA series.

Todd, 36, became the sixth driver in Funny Car to win consecutive U.S. Nationals. Now he has his sights set on winning the Funny Car series championship, something Oberhofer accomplished in 2015 with Del Worsham behind the wheel of the DHL Toyota Camry.

Worsham’s championship was the first for the legendary Connie Kalitta team in 20 years. Todd’s U.S. Nationals title last year was the Kalitta team’s first since Connie won the Top Fuel race in 1994.

Oberhofer is on quite a run and can’t wait to get going for the Countdown to the Championship – the last six races – which gets underway this weekend in Reading, Pa.

Todd won this year’s U.S. Nationals from the No. 1 seed, being the class of the field the entire four days.

“It was a crazy accomplishment for sure,” Todd said. “It’s by far the hardest race to win and back-to-back, it puts you on a list with some pretty elite drivers and I’m really lucky to be a part of that.

“This year we had a way better car going into the event than we did last year. We tested really well the week before at Raceway Park, then on Friday night we threw down on the night run and that’s when you need to make your best run of the weekend to get qualified for the race.

“We qualified No. 1 and just made some really good runs all throughout the weekend during the heat of the day and that’s what it takes to go out there and be able to win on Monday.”

Todd said he didn’t feel any pressure coming in as the defending champion.

“I don’t think a lot of people expected us to go out there and win back-to-back U.S. Nationals, so I wasn’t putting any added pressure on myself,” Todd said. “I just went out there and treated it like any other race.

“It’s a big race and if you’d tell yourself that you’d psych yourself out, so you just want to stay calm, and Jon and Todd (Smith) definitely did that and did a great job of reading the race track and made this all happen.”

Todd is comfortable in his second year in the Funny Car after competing several years in the Top Fuel dragster, which is much longer than the Funny Car.

Oberhofer was a crew member of the late Scott Kalitta when Scott won consecutive Top Fuel series championships in 1994 and 1995.

And it was Scott who persuaded his father, Connie, to start a Funny Car team in 2005. Scott was killed in a race at Englishtown, N.J., in a Funny Car 10 years ago, and the team continued to run the car in his honor, making the back-to-back wins in the U.S. Nationals even more special.

Oborhofer displayed a picture of Scott, which is inside the DHL Toyota at the race shop in Ypsilanti, while the crew prepared the car for the Countdown to the Championship.

“It took me 28 years to win the first Indy, and now to go back-to-back is pretty special, especially since it’s Scott’s car and he always wanted to win Indy,” Oberhofer said. “He was never able to win Indy, was close a couple of times.”

Oberhofer feels good about Todd’s chances in the Countdown, heading in fifth, trailing Courtney Force, who sits atop the standings, by 50 points. Worsham won the title in 2015 as the No. 4 seed, then 40 points behind the points leader.

“We’re pretty confident with the car going into the Countdown and you need that,” Oberhofer said. “You have to try and peak at the right time and make sure you have the right parts and pieces and personnel. J.R. has been doing a really good job of driving the car and his reaction times have been really well. He’s a pretty special guy as far as his driving abilities.”

Doug Kalitta is also fifth in points heading into the Countdown in the Top Fuel category. Kalitta also enters with momentum after finishing second at the U.S. Nationals.