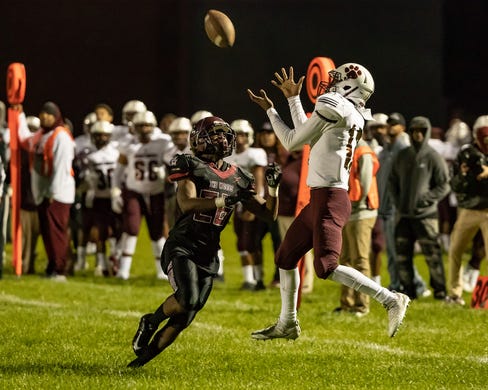 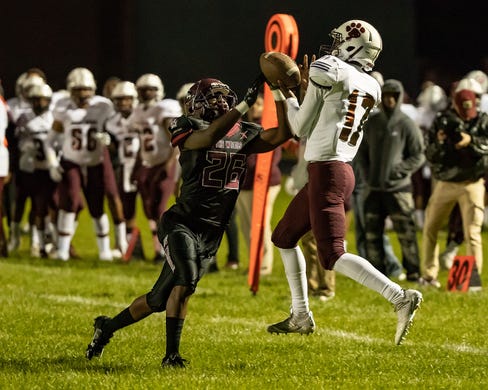 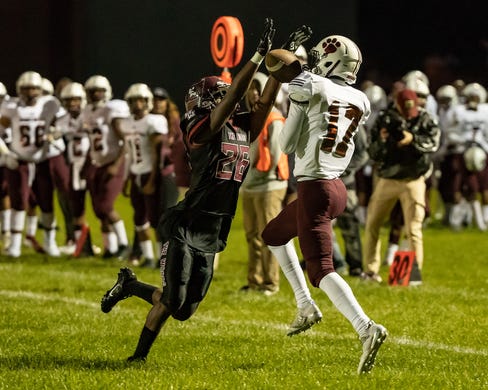 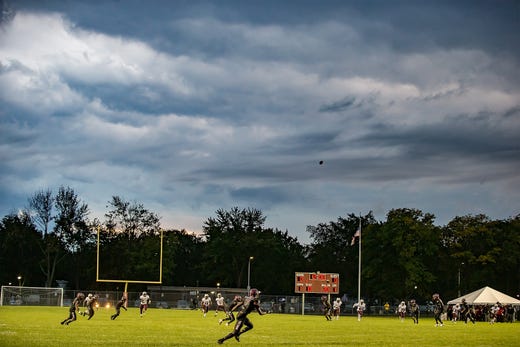 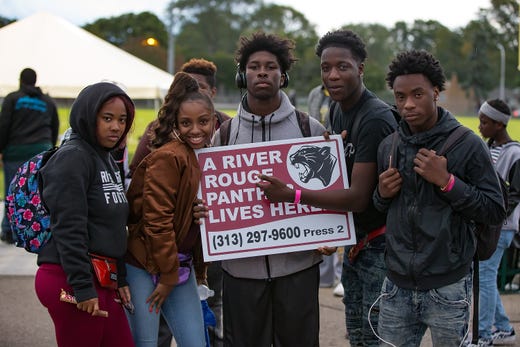 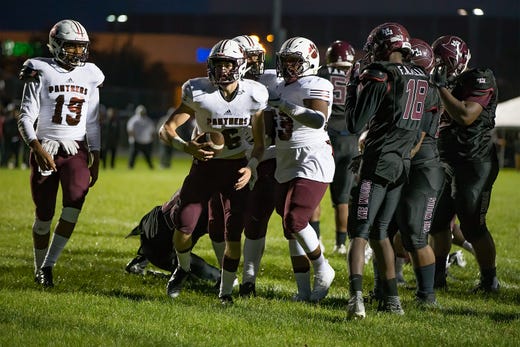 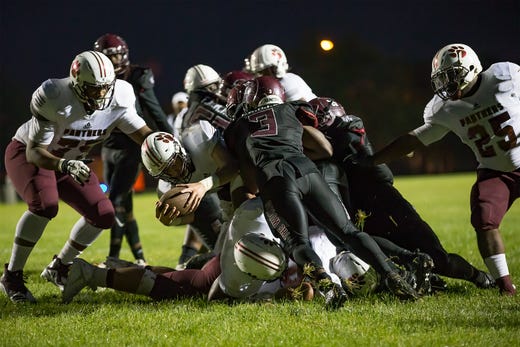 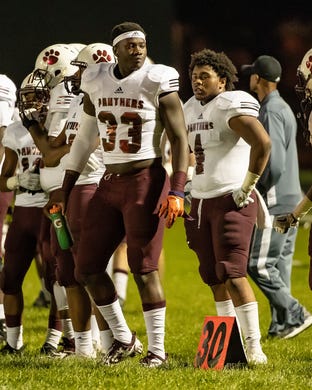 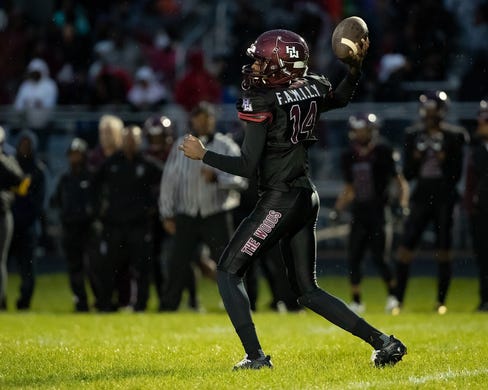 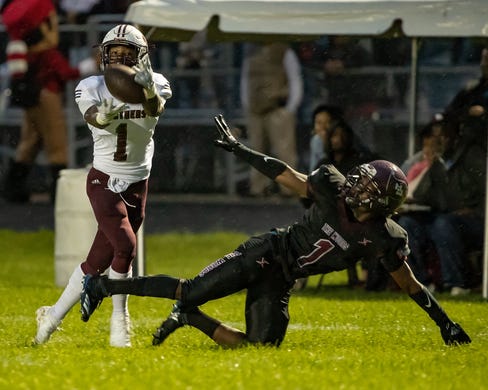 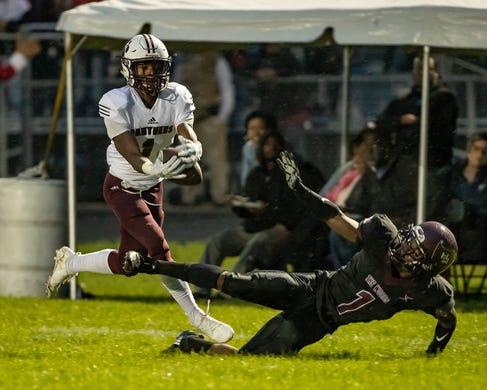 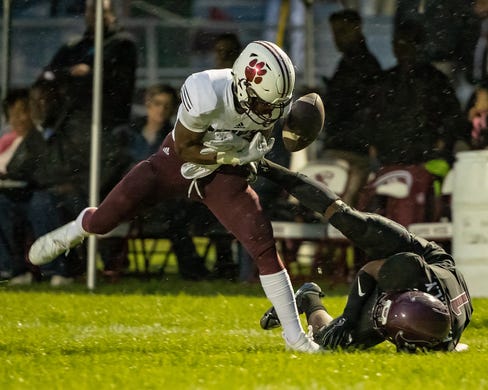 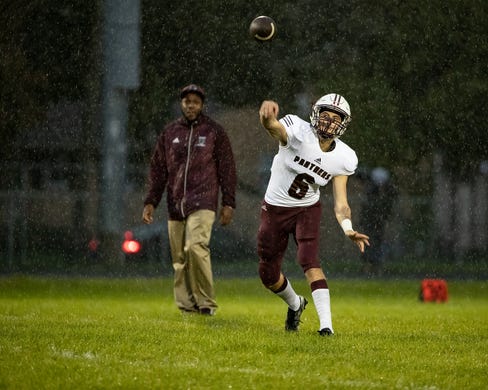 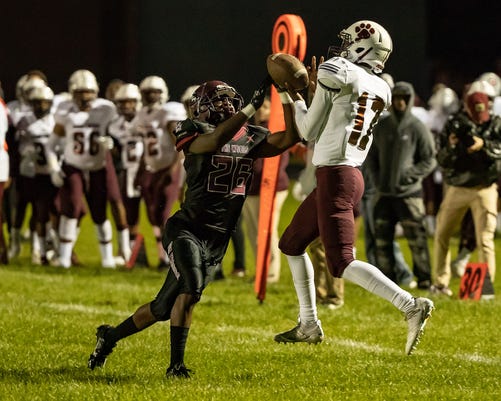 It opened a 6-point halftime lead with three straight scores and went on to take sole possession of first place in the Michigan Metro Athletic Conference Blue division with a 35-7 road victory over Harper Woods.

“Corey Graham can throw the ball vertically, he can throw the ball underneath,” River Rouge head coach Corey Parker said, adding that the he stressed “trying to keep the ball inside and in front of us" while facing an inexperienced quarterback.

Instead, River Rouge quarterback Emanuel Ferguson was the star of the show. He carried the ball for 158 yards and two touchdowns. Running back Deandre Bulley added 80 yards and a receiving touchdown and Caleef Jenkins had two touchdown runs.

Ferguson, an Air Force commit, said his team’s initial game plan was to air it out, but the elements forced him to make a difference with his legs.

“Unfortunately, we didn’t know it was going to start raining,” Ferguson said. “But we adjusted, we were ready for the adjust, and came out ready to pound the ball.”

The sloppy conditions did manage to stifle both teams at first. River Rouge broke the scoreless tie, capitalizing on an interception from third-string quarterback Curtis Jackson by Kamal Hadden with 3:55 left in the first quarter.

River Rouge drove 66 yards on the ensuing drive with 12 consecutive running plays capped by a 2-yard quarterback draw from Ferguson to take a 7-0 lead less than a minute into the second quarter.

“We were just trying to send them all at him,” Orhorhoro said. “We realized (Graham) wasn’t starting, so we tried to put a bunch of pressure on him and have an easy game for our defensive backs to catch picks, intercept balls, all that.”

Ferguson wasted no time extending River Rouge’s lead, opening the drive with a 30-yard completion to R’Montaye Caldwell to make it first-and-goal. Ferguson reached the end zone on a third-down run to make it 13-0 after a missed extra point.

“(Ferguson) just bursts out of there as soon as he gets through the hole,” Parker said. “But his offensive line did a good job of making sure he didn’t take any shots, and if he did, it was 5 or 6 yards down the field.”

Late in the first half, Harper Woods caught its first break, recovering a botched punt at the River Rouge 34-yard-line with 2:18 remaining in the second quarter.

Harper Woods subbed Jackson out and called on wide receiver/cornerback Elija Griffin to shore up its quarterback play — and he did not disappoint.

Harper Woods reached the 10-yard-line with five straight running plays, giving its offense two shots at the end zone with Griffin in the shotgun and 13 seconds remaining. Griffin’s first attempt sailed out of the end zone, but his second dropped into the arms of senior Chris Robinson with all zeroes on the scoreboard to make it 13-7.

River Rouge returned to its ground game to start the third quarter, opening the half with seven run plays — including a 40-yard scamper from Ferguson — on an 80-yard touchdown drive that took just 2:57 and was finished off by a 10-yard carry to the outside by Jenkins. A successful two-point conversion made it 21-7.

A pass interference penalty put them inside the red one, but Jackson threw a pick in the end zone on fourth down.

A 32-yard run from Ferguson followed by a 48-yard touchdown pass from Mekhi Hunt to a wide-open Jenkins opened River Rouge’s lead to 28-7 to put Harper Woods away for keeps.

Birmingham Brother Rice 31, Grand Ledge 28: Running back James Donaldson was a yard short of Brother Rice’s single-game rushing record with 290 yards and three touchdowns. Patrick Balow had five receptions for 62 yards and a TD, Colin Gardner made five catches for 57 yards and Daron Gilbert made the clinching interception with 37 seconds remaining for Brother Rice (4-2, 0-2 Catholic League Central). Grand Ledge is 1-4.

Detroit Central 36, Detroit Pershing 6: Orlando Clarkston had two rushing touchdowns and 124 yards, Justin Tuggle had a 55-yard rushing score, Terrence Ealy had 194 yards throwing with both a passing and rushing touchdown, and Kadeem Tex blocked a punt and returned it for a touchdown for Central (3-3, 2-2 PSL Black). Pershing is 1-5, 0-4).

Detroit Loyola 20, Bloomfield Hills Cranbrook Kingswood 17: D’Vaun Bentley had 13 carries for 121 yards and a touchdown for Loyola (5-1, 3-1 Catholic AA). Jack Sairman went 7-for-15 passing for 80 yards and one touchdown and had a rushing score and eight tackles for Cranbrook-Kingswood (4-2, 2-2).

Detroit Mumford 34, Detroit CMA 0: Tahj Stewart went 7-for-12 passing with three touchdowns and one rushing score, Kyle Henderson had 11 carries for 106 yards, Treyvon Downer had four catches for 79 yards and two touchdowns, and Dayohn Bostic had nine tackles, three tackles for loss and a sack for Mumford (5-1, 3-0 PSL Green). CMA is 0-6, 0-3.

Hamtramck 21, Detroit University Prep 6: Noah Stokes had 21 carries for 105 yards and two touchdowns, Dorean Grimes had four tackles and an interception, and Antwan Tramble went 4-for-8 passing for 90 yards and one rushing touchdown for Hamtramck (2-4, 2-2 Michigan Metro Black). University Prep is 1-5, 0-4.

Macomb Dakota 33, Utica Ford 0: Running back De’Javion Stepney had 16 carries for 196 yards and two TDs, Austin Morrison rushed for 169 yards on 18 rushing attempts, Quarterback Mark Tocco threw two TD passes and ran for another and Brandon Michalak made a TD catch for Dakota (5-1, 2-1 MAC Red). Nathan George made eight tackles and a sack, and Graham Mason had seven tackles, two for a loss for Utica Ford (2-4).

Riverview 49, Monroe Jefferson 20: Ethan Lockhart had four carries for 68 yards and three touchdowns, Jimari Moultrie had seven carries for 82 yards and an interception and two fumble recoveries, Dominic Wood went 1-for-2 passing with a 35-yard touchdown pass to Steven Rice for Riverview (5-1, 4-1 Huron). Jefferson is 0-6, 0-5.

White Lake Lakeland 28, Walled Lake Western 7: Lakeland busted a big run on its first play from scrimmage to go up, 6-0, and never looked back. Western (4-2, 4-1) had a difficult time moving the ball all night, but when quarterback Sam Johnson scored with about two minutes left in the first half to draw Western within a touchdown it looked like it was on the right track, but two second half turnovers doomed it. Johnson, committed to play football at Boston College, was Western’s best player, going 11-for-17 passing for 197 yards and one rushing touchdown. Lakeland improved to 4-2, 4-2.