With Drummond and Griffin, Pistons are taking an unusual approach to building their starting lineup

The Celtics romped, 109-89, after dominating the first half. The Detroit News 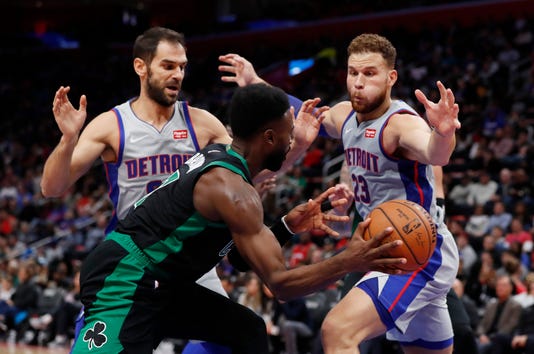 Detroit — The Pistons are taking a different approach to structuring their roster, with a pair of big men as their building blocks, in Blake Griffin and Andre Drummond. It’s a rarity in the NBA, especially in the new, fast-paced, up-tempo, 3-point shooting offenses that are dominating.

It has worked for their first 30 games together and especially in the first four games this season, when they had combined for more than 200 points as new coach Dwane Casey has retrofitted the offense to Griffin’s ability to handle the ball and score in the paint.

Other teams are taking notice, looking to take Griffin out of the offense, as the Celtics did in their 109-89 victory on Saturday night at Little Caesars Arena.

“These guys, with the amount of production they have from their (big men), it’s pretty unique with their size. As you go through the league, there are very few front lines like this,” Celtics coach Brad Stevens said before the game. “Clearly that’s to take advantage of Blake’s skill set. They’re running a little bit more stuff at the elbow that he’s been doing for a while. So clearly, (Casey) is mixing and matching those two and doing a great job of it obviously.”

Beyond Griffin’s 50-point game against the Sixers, he’s been handling the ball more than anyone else on the team and is doing it from all over the court. At 6-foot-10, he’s a difficult defensive assignment for most players

“Six-foot-10, just being 6-10 doesn’t do much, but when he’s that talented and that good and shoots it that well and handles — he’s averaging four 3s a game right now — and he’s been one of the best post players and passers in the game for a long time,” Stevens said. “Through four games, he’s played as well as anybody in the league.”

When Casey took the reins, he knew the possibilities that having both big men could provide. That included some rebounding mismatches that he didn’t have when he coached the Toronto Raptors.

“One thing we do have an advantage is that we have two of the elite rebounders in the league in Andre Drummond and Blake Griffin,” Casey said. “We don’t want to take for granted that we have those two guys. Everybody has a job to do on the boards, getting rebounds, finding bodies and we still have the athletic ability to run.

“Blake and Andre had done an excellent job of dominating the boards.”

Drummond was coming off a game with 26 points and 22 rebounds and had a double-double in all four games but was held to 18 points and eight rebounds against the Celtics.

With the lopsided score in the second half, Casey went to the bench more, including some minutes for Glenn Robinson III, Bruce Brown and Henry Ellenson. The bench rotation has been a bit shorter in the first few games, as Stanley Johnson and Reggie Bullock have been getting their footing as the starting wings.

Bullock has struggled, starting 4-of-20 from 3-point range, after shooting 45 percent last season. He’s had several shots go in and out and with Luke Kennard (knee sprain) out, the Pistons are looking for outside shooting.

“It’s the same thing Boston just went through. They were shooting horrendously but at some point, your shots will start falling, as long as they’re good rhythm shots,” Casey said. “The back-out pull-up 3s are not the 3s you want to take. The drive-kick-swing 3s and the rotation 3s and around-the-horn 3s into the shot are the ones we want to take.

“Our shooters have to continue to shoot and at some point, they will fall. They just have to keep their confidence. It happens when the ball is moving and you get a rhythm.”

Robinson would seem to be a viable option — and he played nine minutes and shot 1-of-4 from the field — but doesn’t look to be moving into the starting lineup anytime soon.

“There’s nothing going on — there’s no drama,” Casey said, of Robinson as a potential starter. “Everybody is right in that level; that could change the next game. There’s no quarterback controversy.”

Johnson had his best game of the season, with 16 points on 6-of-11 shooting, including three 3-pointers.