Western Michigan has little room for error if the Broncos have any hopes of winning the Mid-American Conference championship following its one-sided loss to Toledo last Thursday in Kalamazoo. 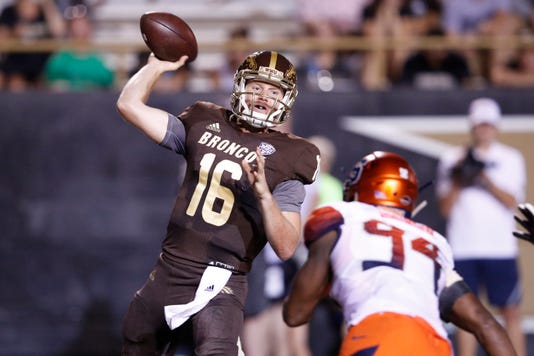 The Broncos will have to get the job done without junior quarterback Jon Wassink, who is out indefinitely with a foot injury suffered in the opening quarter against Toledo.(Photo: Joe Robbins, Getty Images)

Western Michigan has little room for error if the Broncos have any hopes of winning the Mid-American Conference championship following its one-sided loss to Toledo last Thursday in Kalamazoo.

The Broncos (6-3, 4-1 West) have to do a lot better job on defense, especially tackling if they want to rebound from the 51-24 loss which ended their six-game winning streak when they play host to preseason MAC favorite Ohio (5-3, 3-1 East) Thursday night at Waldo Stadium.

The Broncos will have to get the job done without junior quarterback Jon Wassink who is out indefinitely with a foot injury suffered in the opening quarter against Toledo. True freshman Kaleb Eleby responded with a 23-for-28 effort for 293 yards and two TDs, but was also sacked five times after Wassink was sacked just four times all season.

“I thought Kaleb did a good job for his first ever playing college football, his numbers were really good, but he made some mistakes and took some sacks," said WMU second-year coach Tim Lester of Eleby. “It definitely was a little bit of a momentum killer in the first drive of the game to lose your starting quarterback who was having a good year so that hurt us and was probably one of the reasons we couldn’t keep up scoring-wise. He (Wassink) won’t be back this week and I don’t think he’ll be back at all.”

Wassink completed 61.6 percent of his passes for 1,994 yards and 16 TDs with six interceptions before his injury. He suffered a shoulder injury in Week No. 8 last year and the Broncos lost three of their final four games to finish 6-6 and miss out on a bowl game.

WMU’s offensive line has to do a better job of opening holes for the running attack against Ohio to take some of the pressure off of Eleby.

The Broncos were dominated on both sides of the line of scrimmage against Toledo which limited them to 125 yards rushing (33 carries) and Levante Bellamy (865 yards), who led the MAC in rushing heading into the game, was limited to 44 yards on nine carries and his fumble early in the third quarter led to a Toledo TD and 37-17 lead.

Simply put, the Broncos were terrible on defense, allowing Toledo to pile up 515 total yards, 268 on the ground with the majority coming after first contact.

Now, Lester's focus is on Ohio.

“They are physical, they run the ball well and we know they’re going to come in here and try to run the ball and throw the ball over the top of us so it will be a heck of a challenge and we’re looking forward to getting back out there,” Lester said.

“It (loss to Toledo) left a bad taste in our mouth after the way we played since we had won six games in a row and haven’t had this feeling in a long time. There’s definitely a chip on our shoulder because we didn’t feel like we played as good as we could have and we’re excited about the opportunity to get back out there again.

“We know we have to win the turnover battle and I think we have to win the battle at the line of scrimmage. We have to run the ball and stop the run. We’re going to have to win in the trenches. And, the biggest thing for us is we have to tackle better. We missed on a lot of tackles and it wasn’t on just one level. The good thing is it’s the guys who have been consistent all year and they have a chip on their shoulder and ready to get back at it.”

WMU’s defense better improve in a hurry because Ohio has been able play smash-mouth football, rushing for 411 yards in a 52-14 rout of Ball State a week after dominating Bowling Green 49-14, a team the Broncos defeated at Bowling Green, 42-35.

Ohio second-year starting quarterback Nathan Rourke threw for four TDs against Bowling Green, then threw for a TD and ran for two TDs against Ball State.

Ohio’s running game is led by A.J. Ouellette, who has topped the 3,000-yard mark for his career.

Eagles dominated at home by Army, CMU next up

Eastern Michigan also has little room for error if it hopes to play in a bowl game for the second time in the last three years.

The Eagles slipped to 4-5 with a 37-22 Homecoming loss to Army Saturday at Rynearson Stadium.

EMU trailed 16-0 at halftime and failed to pick up a first down. Army piled up 289 yards on the ground on 73 attempts and had the ball for 45 minutes, 42 seconds.

While the Eagles were focused on trying to stop the run, Army quarterback Kelvin Hopkins completed 7-of-8 for 126 yards, including a 26-yard TD pass on third down for a 23-14 lead and a 2-yard TD toss on fourth down for a 30-14 cushion.

“I felt we had a really good plan defensively and worked that plan, but what’s interesting is Army hurt us with the pass,” noted EMU head coach Chris Creighton. “They didn’t complete a single pass on us last year, it’s a different quarterback and we knew that this guy (Hopkins) could throw and he was 7-for-8 with an unbelievable pass and catch on a third and 7 to keep a drive alive and then two explosive passes later in the game that was timely for them and helped put a dagger in us.”

EMU quarterback Tyler Wiegers (Detroit Country Day) was 19-of-29 for 201 yards and two TDs, including a 58-yard toss near the right sideline to Blake Banham to cut the deficit to 16-14 in the third quarter.

“They have a system defense where they know how to play it and how to adjust and they are physical, fast and keep the ball in front of them, and it’s been difficult for people to score points on them,” Creighton said of CMU which lost to Akron Saturday, 17-10.

CMU has yet to beat an FBS team this season, but that hasn’t prevented junior defensive lineman Mike Danna (Warren DeLaSalle) from having a strong season.

CMU is No. 1 in the MAC in pass defense, limiting opponents to an average of 141 yards through the air.

Danna is also putting pressure on quarterbacks. He had four tackles for loss, including two sacks in the loss to Akron while also forcing a fumble. He now leads the MAC with eight sacks.

Sophomore Tony Poljan got his first start since Sept. 15 and completed 19 of 37 for 169 yards.

"I thought Tony came in and did a good job of managing the game, trying to stay out of bad plays and avoided making mistakes to hurt the offense," CMU coach John Bonamego said. "He made some plays with his legs, designed quarterback runs and that sort of thing and for the most part made good decisions. He's a young quarterback trying to find his way back in the starting lineup and I thought overall there was more good than bad."

Of facing EMU, Bonamego said: "I think defensively they are very good. They are physical and I've been impressed with their secondary and how well they play together."