New Orleans put the clamps on Cam Newton, and the Saints beat the Carolina Panthers 12-9 on Monday night to take a big step toward locking up home-field advantage in the NFC playoffs. 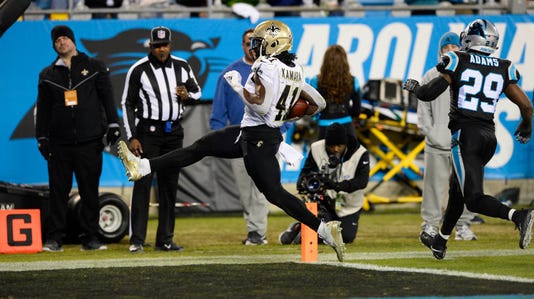 Charlotte, N.C. — Drew Brees and the New Orleans Saints still have one of the league's top-scoring offenses, but lately it's the defense that's been carrying the NFL's most complete team.

On a night when Brees and the offense couldn't get much going and made some uncharacteristic mistakes, New Orleans put the clamps on Cam Newton and the Carolina Panthers in a 12-9 victory on Monday night, moving the Saints into position to lock up home-field advantage in the NFC playoffs.

"I believe in us, game in and game out, first quarter to fourth quarter," defensive end Cam Jordan said. "If it comes down to a crucial play, I believe in us."

The Saints (12-2) held an opponent to 17 points or fewer for a sixth straight game. They limited Newton to 131 yards passing, sacked him four times and forced two turnovers. Carolina (6-8), which lost its sixth straight, had just 247 yards and 13 first downs. The Panthers' only scores came on a trick play on fourth down and an interception return on a 2-point conversion attempt.

"So proud of the defense," Saints coach Sean Payton said. "I thought they were outstanding. It's tough to win a division game on the road and we were able to do that."

Alvin Kamara had 103 yards from scrimmage and a touchdown, and Brees had 203 yards passing for the Saints, who took a one-game lead in the NFC over the Rams. The Saints close the season at home against Pittsburgh and Carolina; the Rams visit Arizona and host San Francisco.

Newton struggled throwing the ball more than 10 yards downfield because of a lingering sore right shoulder. He said after the game he's unsure what the injury is, but he mentioned his labrum and rotator cuff as possible issues. He has been limited in practice for weeks and doesn't have the zip on the ball he normally has.

So much for his boast that the Panthers were bringing a cup to steal the "juice" from the Saints.

"(Newton) said something along the lines of they brought their own cup, a juice box or something, I don't know what it was," Jordan said. "But I do know that he's got to go back to the refrigerator and pull out a bigger cup."

The Saints swept three games from the Panthers last season and knocked them out of the playoffs, prompting Jordan to send Newton a bottle of red wine in the offseason, while some other teammates gave him a broom. This loss likely ended Carolina's playoff hopes again.

Newton said his shoulder simply isn't getting better — or worse — and he refused to blame the injury, saying, "I have to be better."

"Our defense played a hell of a game and we have to reward them," Newton said. "We had two turnovers in the red zone and that comes down to execution."

Win gets Eagles back in the mix

Facing a must win with their Super Bowl MVP backup quarterback leading the way, the Philadelphia Eagles responded like champions.

Don’t write them off just yet.

“We’re still playing for something,” coach Doug Pederson said Monday, less than 24 hours after Nick Foles led the Eagles to a 30-23 victory over the Los Angeles Rams. “Our backs are against the wall. We know the nature of where we are, what needs to be done, and I think you saw a little bit of that last night.

“Just how well this team kind of came together in all three phases to get this win against a great football team.”

“We want to continue to play,” safety Malcolm Jenkins said. “If we want our dreams to continue we’ve got to go take it. … We’ve got the mentality that we have to go steal whatever it is that we want if we want to continue. It’s not going to be easy; nobody asked it to be. We’re fine with doing something special and extraordinary. Let’s just take it one week at a time, keep competing and keep having fun.”

Filling in for injured starter Carson Wentz, Foles was excellent against the Rams (11-3). He completed 24 of 31 passes for 270 yards. Foles threw an interception but led the offense to its second-highest scoring output this season in his first start since Week 2.

Foles played with the same poise and confidence he displayed during the 2017 postseason when he stepped in for Wentz and led Philadelphia to its first NFL title since 1960.

“They don’t get too low. They kind of stay right in the middle. If something negative happens in the game, they brush it off and want to come back to it again.

“They will make it right the next time. Our quarterbacks have that type of demeanor and that is one of Nick’s strengths, obviously, and it showed.”

Pederson said Foles will start this week against the Texans but Wentz will remain on the active roster despite a stress fracture in his back.

“We continue to gather information like we do on all our athletes and all our players,” Pederson said. “The information is favorable and it’s something that was positive for him, positive for us.

“But at the same time, we have to make sure that he’s 100 percent or better before we put him back out there. But right now, he’ll be listed as week to week and we will go from there.”

Dolphins running back Frank Gore, the NFL’s leading active rusher, is expected to miss the rest of the year with a sprained foot, a person familiar with the situation said Monday.

Gore, 35, was hurt during Sunday’s 41-17 loss at Minnesota. He has played in 126 consecutive games and made 122 starts in a row, and both streaks are the longest by an NFL offensive skill player.

Henry remains on the physically unable to perform list and does not count against the 53-man roster. However, his return to the practice field does start the 21-day clock for him to be activated or placed on injured reserve for the remainder of the season.

Los Angeles (11-3) has clinched its first playoff spot since 2013 and is tied with Kansas City atop the AFC West.

... The Falcons are placing rookie running back Ito Smith on injured reserve with a knee injury, dealing another blow to a position already weakened by the loss of starter Devonta Freeman.