The Twins will retire Joe Mauer’s No. 7 jersey next season, making a swift move to honor the homegrown player and six-time All-Star who recently retired after a 15-year major-league career. 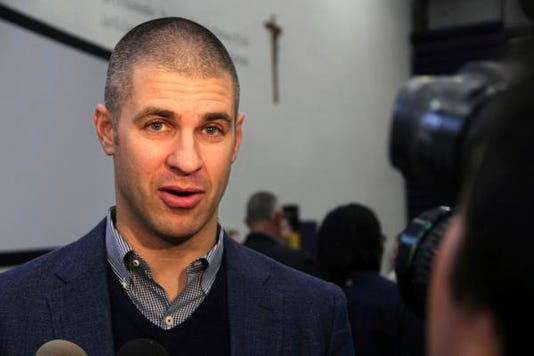 St. Paul, Minn. — The Twins will retire Joe Mauer’s No. 7 jersey next season, making a swift move to honor the homegrown player and six-time All-Star who recently retired after a 15-year major-league career.

The Twins surprised Mauer with the announcement Tuesday, while his accomplishments were celebrated at an all-student assembly at his alma mater Cretin-Derham Hall High School.

“I enjoyed putting the uniform on every day and being able to put on the Twins uniform, being at home, meant more to me than you’ll know,” Mauer said.

“When I take my kids to a game and see No. 7 up there, it’ll probably put a smile on my face every time I see it.”

Oliva, Hrbek, Blyleven and Kelly entered the gym during the ceremony. Hrbek, another Minnesota-born-and-raised player who spent his entire career with the Twins, spoke at the podium inside the gym and turned to Mauer to reveal the news.

“It’s not every day you have your favorite player growing up telling you you’re going to go on the wall with him with the retired numbers,” Mauer said afterward. “I’m still kind of in shock right now. Those guys helped me out so much, not only as a baseball player, but how to conduct yourself as a man and as a professional.”

In the same place, 17½ years ago, a baby-faced and bespectacled Mauer signed his first contract with the Twins during a news conference following their selection of the smooth-swinging catcher with the first overall pick in the draft. Now, Mauer’s a father of three children with graying and closely shaved hair, contemplating the next phase of life at the ripe old age of 35.

“It’s been going well. It’s been fun to be a full-time dad and help out at home as much as I can,” he said. “It kind of almost feels just like a regular offseason. I know there might be some different feelings and some different emotions come spring training, but I’m definitely in a good place.”

... Infielder Daniel Descalso and the Cubs agreed to a $5-million, two-year contract that includes a club option for 2021.

... The Angels are signing veteran right-hander Matt Harvey, per MLB.com.

... The Royals signed outfielder Terrance Gore to a split contract for next season.