Previewing the First Responders Bowl, the Quick Lane Bowl and the Cheez-It Bowl. 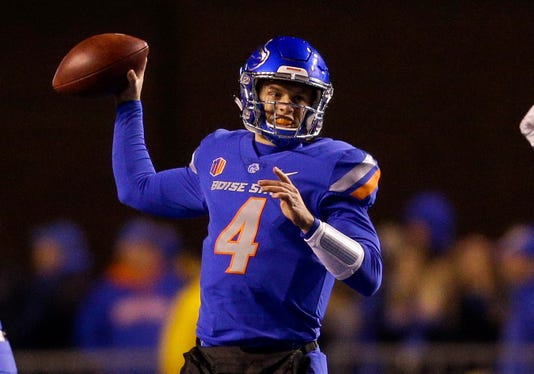 Boise State quarterback Brett Rypien is the active FBS career leader with 13,581 yards passing, a Mountain West record. He also shares the rare distinction with Kellen Moore, now the quarterbacks coach for the Dallas Cowboys, as a four-year starter for the Broncos.(Photo: Steve Conner, Associated Press)

Key matchup: Cal’s defense vs. TCU QB Grayson Muehlstein. The Bears have one of the nation’s best defenses, led by linebackers Evan Weaver and Jordan Kunaszyk. The duo set a school record for combined tackles with 276 and have 8.5 sacks between them. The Horned Frogs will need to find a way to protect Muehlstein, who became the starter in their next-to-last regular-season game after injuries to Shawn Robinson and Mike Collins.

Key matchup: Georgia Tech's triple-option vs. Minnesota's defense. The Yellow Jackets average fewer than 10 passes a game, but they average a nation-best 335 yards rushing per game behind a unique offense that is hard to stop.

Players to watch: Minnesota – WR Tyler Johnson. The All-Big Ten player had arguably the best season in school history as a receiver, making 74 catches for 1,112 yards and 10 touchdowns. Georgia Tech – QB TaQuon Marshall. He ran for 896 yards and 11 touchdowns and threw for 824 yards and five scores with four interceptions this season.

Notable: Georgia Tech hired former Temple coach Geoff Collins to replace Johnson, who is retiring. ... Minnesota became bowl-eligible with wins in two of its last three games — beating Purdue 41-10 and winning at Wisconsin 37-15, knocking off the Badgers for the first time in 15 years and for the first time on the road since 1994. ... Georgia Tech won six of its last eight after a 1-3 start. ... Minnesota played in the Quick Lane Bowl three years ago, beating Central Michigan 21-14. ... Tyler Johnson, a junior, is 10 catches from matching Eric Decker's single-season school record from 2008, 13 yards receiving away from equaling Ron Johnson's single-season mark from 2000 and a touchdown away from tying the school record set by Omar Douglas in 1993 and tied by Ron Johnson in 2000.