Suh’s diminished presence has been perhaps the most unexpected element of those struggles, but on this particular night, the five-time All-Pro and former Detroit Lion was as dominant as he’d ever been in a Rams uniform. 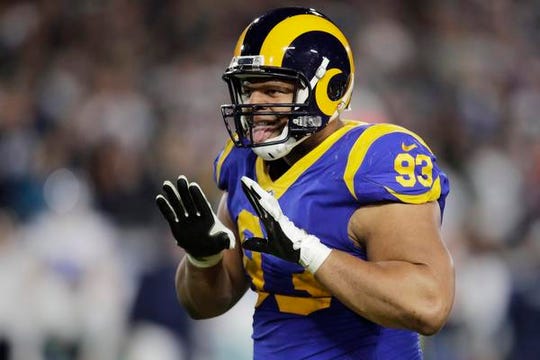 Thousand Oaks, Calif. — It was fourth-and-1, early in the fourth quarter, and Ndamukong Suh could sense what was coming.

The Rams led by just a touchdown. The Cowboys were driving in their territory, in desperate need of a single yard.

As Suh lined up over their center, looking left down the line, then right, before settling into his stance, it was clear that Ezekiel Elliott was headed into the teeth of the Rams’ defense, directly into his grasp.

The Rams had spent most of the week hyper-focused on how to stop Elliott, answering question after question about their ineptitude on the ground.

The doubts were certainly warranted. In spite of a star-studded interior that included two All-Pros, no defense this season had allowed more yards per carry (5.1), and here, against the league’s leading rusher, those issues threatened to end the Rams’ season.

Suh’s diminished presence has been perhaps the most unexpected element of those struggles, but on this particular night, the five-time All-Pro and former Detroit Lion was as dominant as he’d ever been in a Rams uniform.

All throughout, Suh made gaining even a single yard on the ground as difficult as it’d been all season.

So, on fourth-and-1, with Elliott running up the gut, there would be no stopping Suh. He fired out of his stance, first closing the gap to his right.

With Elliott ranging the other direction, Suh immediately disposed of Dallas center Joe Looney a split-second later, before throwing as much of himself as he could in front of Elliott in the opposite gap.

His helmet alone was enough to impede Elliott, as the rest of the Rams’ defense swarmed, forcing a turnover on downs at the most critical juncture of the season.

“He was a man amongst boys,” Rams outside linebacker Dante Fowler said.

“He was dominant the whole game. I think that’s the most dominant game he’s ever played, and he’s had a lot of dominant games.”

It was exactly the sort of dominance the Rams envisioned when they’d signed Suh to a one-year, $14 million contract at the end of March, pairing him with Donald, the defending Defensive Player of the Year, to create what appeared to be one of the most unstoppable interior combinations in NFL history.

What actually came of their pairing fell short of those sky-high expectations. But if the Rams hope to stop the Saints and reach the Super Bowl on Sunday, they’ll need Suh to again make the sort of impact they’d long hoped for from him.

“When he’s able to do that, it makes a huge difference,” Rams coach Sean McVay said.

“I thought he really came with a great focus and concentration, and I think it showed up with the way that he was able to play.”

In March, over a sushi dinner at Nobu in Malibu, the Rams brain trust pitched Suh on the difference they believed he could make. Suh had already visited New Orleans and heard a similar pitch over breakfast from Saints coach Sean Payton.

But the Rams, who spent the offseason adding every talented player they could, were more convincing.

On a defense stocked with Pro Bowl talent, they told him, his presence could be the last piece in a Super Bowl puzzle.

For Suh, that was especially appealing. He’d played in just three playoff games before last Sunday, never advancing past the divisional round.

“One of my ultimate goals, one of the reasons I signed here, was to have an opportunity to play in the postseason,” Suh said. “I felt like this team had some of the right pieces, and I would be good addition to it.”

How much Suh’s addition has really changed the composition of the Rams defense is still up for interpretation.

Suh was expected to divert blockers from Donald, leaving him in more 1-on-1 rush situations, but Donald was still double-teamed more than 60 percent of the time, according to NFL Next Gen Stats.

Donald was able to rack up 20.5 sacks on his way to another Defensive Player of the Year award, anyway. But for most of the season, Suh’s presence did less than expected to distract offensive lines from sending every possible blocker Donald’s way.

Still, as blockers have opted to overload his interior counterpart, Suh’s presence on the Rams front didn’t translate to the stat sheet, either.

Suh finished with 4.5 sacks and just four tackles for loss – the lowest total of his career and far from what the Rams likely expected when they handed him that huge contract.

But last week, as Suh wrecked play after play, the vision the Rams had sold him on months ago unfolded under the lights at the Coliseum. Suh was an absolute force.

“It’s always a goal for me to prove I’m an elite player,” Suh said, “and it’s a platform to do that. I was put in position to make plays, and I saw things in their particular offense that I could affect, and I took my shots.”

As the Rams held Elliott to 47 measly yards, those shots seemed like haymakers.“I thought Ndamukong Suh had his best game of the year,” McVay said. “He had a look in his eye where he was ready to go.”