Staying focused with a big lead in the division isn’t easy, but Detroit East English girls basketball took care of business yet again with a 62-36 home victory over Detroit Pershing on Thursday night. 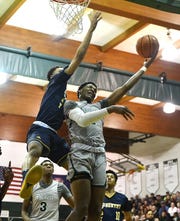 Staying focused with a big lead in the division isn’t easy, but Detroit East English girls basketball took care of business yet again with a 62-36 home victory over Detroit Pershing on Thursday night.

Having a trio of senior leaders helps when it comes to maintaining that focus. East English (9-1, 7-0 Detroit PSL East-Town) is led by Jayla Smith, Alexis Thompson and Kendal Taylor, to whom head coach Sam Hines gives all the credit for keeping his team levelheaded.

East English has a two-game lead in the division, but his veteran trio has been outstanding.

“Having seniors like Jayla Smith, Alexis Thompson and Kendal Taylor — they’re the glue to this program,” Hines said.

Smith led all scorers with 26 points and added 11 assists and seven rebounds. Thompson had 15 points and 14 rebounds and Te’a Leonard added 12 points and 10 steals.

Admitting that his girls are sometimes “legends in their own mind,” Hines said building a solid lead in the East-Town division has paid major dividends for his team both on and off the court.

“The fun part about watching our run in the division is watching the girls grow,” Hines said. “This run has taught them how to start playing team basketball.”

Hines was especially beaming when talking about Smith, who has been getting looks from college programs after a solid prep career. But it’s not all about basketball for her.

“College coaches are starting to recognize her overall game,” Hines said. “But she’s an even better person than she is player.”

East English will bring that veteran team into battle against Detroit Osborn next Wednesday with the regular season winding down.