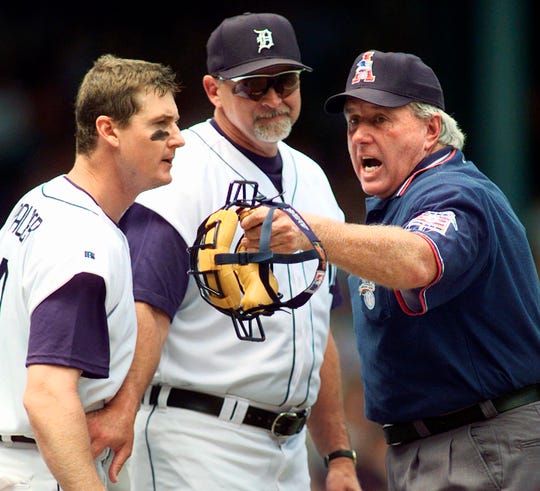 In this July 22, 1999 photo, Detroit Tigers' Dean Palmer, left, continues to argue with home plate umpire Jim McKean, right, as manager Larry Parrish holds Palmer back in the second inning of their game against Kansas City in Detroit. McKean, who umpired 10 no-hitters and three World Series during a big league career from 1973-99, has died. He was 73. (Photo: Duane Burleson, AP)

Jamie McKean, one of his sons, said McKean died in his sleep early Thursday at Bayfront Medical Center in St. Petersburg, Florida, near his home.

Jim McKean had kidney issues and while at St. Anthony’s Hospital in St. Petersburg around Thanksgiving developed a MRSA infection. He had appeared to have recovered from the infection but remained weakened.

“I think his heart just gave out,” his son said.

A Montreal native, McKean umpired in the minor leagues from 1970-73, joined the American League staff in 1973 and made his big league debut that September. His 10 no-hitters tied the record shared by Silk O’Loughlin and Paul Pryor, a mark broken when Bruce Froemming worked his 11th with the St. Louis Cardinals’ Bud Smith on the mound in September 2001.

All of McKean’s no-hitters were as a base umpire. He was behind the plate when Toronto’s Roy Halladay was hitless through 82/3 innings against the Tigers on Sept. 27, 1998, then allowed Bobby Higginson’s home run. That was the second big league appearance for Halladay, who was elected to baseball’s Hall of Fame this week.

“To be honest with you, umpires have to get up for big games, too,” McKean said in 2008. “My premise is, if the umpiring is not good, the games are not good. You can have the two best teams in the world, and if that umpire behind the plate or that umpire on the bases is not good, then it’s not going to be a good game. So that’s where the pressure lies.”

Long spent the past five seasons as the hitting coach of the Cincinnati Reds.

Ottavino to wear No. 0

Turns out Derek Jeter was not the last of the New York Yankees to wear single digits.

The tradition-laden Yankees say new reliever Adam Ottavino will become the first player in franchise history to wear No. 0, a decision that was OK’d by owner Hal Steinbrenner.

Major League Baseball has proposed going back to a 15-day disabled list and increasing the time optioned players usually must spend in the minor leagues, a person familiar with the negotiations tells the AP, moves aimed at reducing the use of relief pitchers and reviving offense.

The person spoke on condition of anonymity because the plans weren’t publicly announced.