Gary Woodland walked through the tunnel to the Phoenix Open’s 16th hole, the par 3 with an atmosphere more like a football game than a golf tournament. 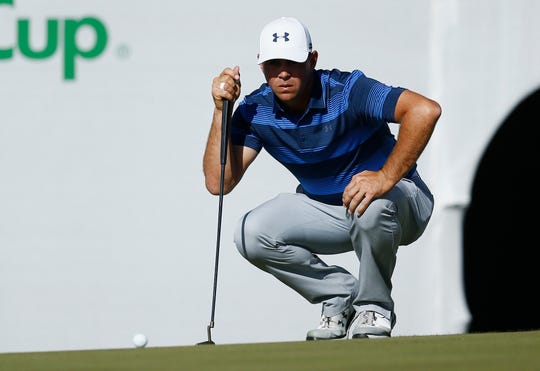 Scottsdale, Ariz. — Gary Woodland walked through the tunnel to the Phoenix Open’s 16th hole, the par 3 with an atmosphere more like a football game than a golf tournament.

Waiting for him was a young lady in a purple shirt with some game of her own.

“I do. I’ve got this,” she told the Phoenix Open’s defending champion.

She sure did. With fans lining the triple-decker stadium that surrounds the hole, Amy thumped the ball onto the green with perfect form, got a read from her new PGA Tour friend and drained the putt. Woodland raised his arms in triumph as the rowdy crowd roared.

“I’ve been blessed to do lot of cool things on the golf course, but that is by far the coolest thing I’ve ever experienced,” Woodland said Wednesday. “She was phenomenal and then to step up in front of all the people and the crowd and everything and to hit the shots that she hit and made par, I never rooted so hard for somebody on a golf course. It was an emotional, emotional, really cool experience.”

Woodland had one of his own a year ago at the Phoenix Open.

Winless for nearly five years on Tour and coming off a difficult summer, Woodland put on a display of power and finesse at TPC Scottsdale to beat Chez Reavie on the first hole of a playoff.

Waiting for him greenside was a surprise visitor: infant son Jaxson with wife Gabby.

Jaxson was born prematurely the previous June after a twin girl was lost in a miscarriage. Seeing him along with finishing off his first PGA Tour victory since 2013 brought a swell of emotions that still resonate as he prepares to defend his title.

“Obviously, I had a great week here last year,” he said. “Great emotions being back, nice to see a lot of the same people.”

Woodland returns to the desert as the defending champion at a tournament that’s become the rowdiest place in golf.

More than a half-million fans stream into TPC Scottsdale each year in a spectacle that’s become known as The Greatest Show in golf. The Phoenix Open drew nearly 720,000 fans throughout the week a year ago to set a PGA Tour record, including more than 216,000 on Saturday.

This year’s tournament might get as much attention for a man who won’t hit a shot as the players braving the rowdiness.

Saturday’s third round will be the final broadcast for NBC lead golf analyst Johnny Miller.

Miller announced in September that he’s retiring to spend more time with his family, ending three decades of calling shots the way he sees them.

Miller shot a 63 to win the 1973 U.S. Open at Oakmont and earned a spot in the Hall of Fame with 25 career victories, but carved out a memorable second career by saying what he saw without worrying about what the players thought of him.

“He’s always tried to be up front and present the game of golf in an insightful way for the viewers, whether it was educational about swing, helping people understand it or whether it was just being up front from a players’ perspective as to what was going on,” three-time Phoenix Open Phil Mickelson said. “I thought he’s done an amazing job for the game of golf.”

Mickelson will be making his record 30th career Phoenix Open start, a run that began when he played at nearby Arizona State, where he won three NCAA championships.

“Just amazing how many great memories I have when I come back, ” Mickelson said.

The Web.com Tour named Alex Baldwin its president, the first female to hold the position.