Friday's basketball: Boeheim will coach against Duke after fatal crash

Syracuse athletic director John Wildhack said in a news release Friday that Boeheim would resume his coaching duties at the Carrier Dome three days after the crash.

Friday's basketball: Boeheim will coach against Duke after fatal crash 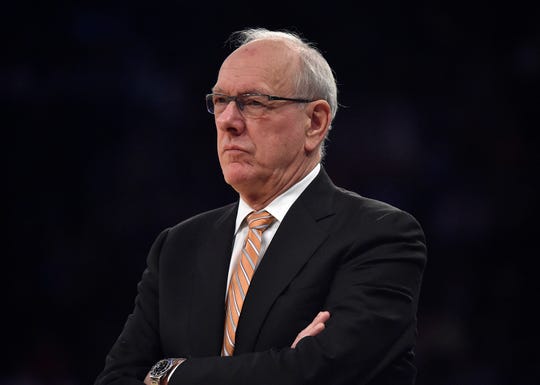 Jim Boeheim will coach Syracuse against top-ranked Duke tonight in his team’s first game since the 74-year-old Basketball Hall of Famer struck and killed a pedestrian on a dark highway. (Photo: Brad Horrigan, Tribune News Service)

Syracuse, N.Y. — Jim Boeheim will coach Syracuse against top-ranked Duke tonight in his team’s first game since the 74-year-old Basketball Hall of Famer struck and killed a pedestrian on a dark highway.

Syracuse athletic director John Wildhack said in a news release Friday that Boeheim would resume his coaching duties at the Carrier Dome three days after the crash.

The accident happened on Interstate 690 in Syracuse on Wednesday night after the Orange beat No. 18 Louisville.

Police say 51-year-old Jorge Jimenez was a passenger in a car that apparently skidded out of control on a patch of ice and hit a guardrail.

Police say Jimenez was trying to get to safety when he was struck by Boeheim’s SUV. Boeheim had swerved to avoid the disabled car, which was resting perpendicular across two lanes.

Jimenez was taken to a hospital, where he was pronounced dead. Another man in the group suffered minor injuries, police said.

No tickets have been issued and the investigation is continuing.

Police said Boeheim has been cooperating. He used his cellphone light to warn other drivers of the disabled car after the accident, police said.

“At this time we have no reason to believe that there are criminal charges that will be coming for anyone,” Syracuse Police Chief Kenton T. Buckner said Thursday evening at a news conference.

Police said sobriety tests administered to Boeheim and the unidentified driver of the other vehicle were negative for any signs of impairment.

Onondaga County District Attorney William Fitzpatrick said he has known Boeheim for 40 years and that the coach does not drink.

Fitzpatrick called it “an accident in the purest sense of the word.”

Boeheim has been head coach at Syracuse, his alma mater, since 1976 and is one of the most accomplished coaches in the country.

Iowa play-by-play announcer Gary Dolphin was suspended for the rest of the season for referring to Maryland’s Bruno Fernando as “King Kong” during a game.

In describing the game’s closing moments, Dolphin said the 6-foot-10, 240-pound African-American who was born in Angola “was King Kong at the end of the game.”

Dolphin sat out two games after being caught on an open microphone criticizing Iowa guard Maishe Dailey in late November.

Bohannon, whose 3 with 28 seconds left in regulation forced overtime, buried another one to put Iowa ahead 68-65 with 2:47 to go. De’Ron Davis answered with a 3-point play, but Bohannon hit a 3 off a loose ball with 2 minutes left to give the Hawkeyes a 71-68 lead. Cook’s free throw with 1:10 left made it a two-possession game, but Morgan responded with a putback.

Indiana’s defense forced Bohannon to jack up a 3 at the shot clock buzzer, but the junior calmly knocked it through to complete one of the spectacular stretches of his career.

Perkins scored eight points in the final 1:15 of the first half as part of an electrifying 10-0 run in which Buffalo built a 35-27 lead. CJ Massinburg scored 18 for Buffalo (24-3, 12-2 Mid-American Conference) in matching No. 5 Tennessee for the nation’s second-longest home winning streak and before the largest crowd in school history.

Buffalo moved into sole possession of first place in the East Division following Bowling Green’s loss to Ohio. And the win also clinched the Bulls a bye into the quarterfinals of the MAC tournament next month as they can’t finish lower than second in the East.

Antonio Williams scored 17 before fouling out to lead Kent State (19-8, 8-6), which lost consecutive games for the first time since a four-game losing streak in February 2018.