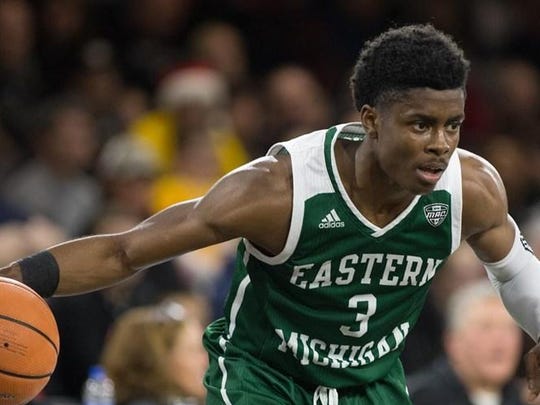 Jackson’s jumper gave the Eagles a 74-66 lead with 1:18 remaining in OT but EMU made only 3 of 10 free throws down the stretch and missed its final four tries from the line. Still, EMU led 77-73 after Kevin McAdoo missed two free throws with 7 seconds remaining. Jared Printy made a 3-pointer for Western Michigan as time ran out.

Elijah Minnie, whose 14 points per game coming into the contest led the Eagles, had 7 points. He shot 20 percent from 3-point range (1 of 5).

The Chippewas were in trouble after the first half, entering the locker room at halftime trailing 34-23. But the visitors mounted a second-half rally to get back in it and ultimately earn the victory. The Cardinals’ 23 points in the second half marked a season low for the team.

Albion 76, (at) Trine 73: In a game that was close all the way, Caden Ebeling gave Albion the lead for good with two free throws with 1:51 to play. Quinton Armstrong led Albion with 21 points off the bench, Ebeling scored 16 and Jamezell Davis Jr. scored 11. Langston Johnson scored 19 for Trine. Both teams are 19-8.