The Detroit News breaks down the Michigan Metro Conference football teams for the 2019 season. 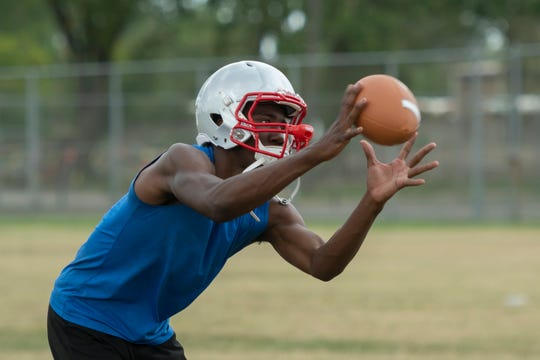 Receiver Darryl Cooper will be one of Ecorse's top targets this season. (Photo: David Guralnick, The Detroit News)

Projected order of finish by consensus of coaches; 2018 records in parentheses.

New coach Jovan Olafioye returns one starter on offense, and it’s senior TE/DE Deandre Gaines who returns from injury. Junior Darrius Cross takes over at QB and will look to find junior WR/DB Darryl Cooper. The defense returns three starters, including senior DB/RB Jamal Hamiel. The performance of junior DB/slot receiver Marcus Walker will be key in Ecorse staying on top in the Red Division.

Five starters return on offense, including WR/RB Darien Green, who had two touchdowns and 20 receptions for 300 yards in 2018. Senior QB Marcus Hode is back after rushing for 500 yards and throwing for eight touchdowns last season. Coach James Pollard’s defense returns four starters and will be led by senior OLB Curtis Snerling and senior DT Tyrone Ruff.