Lourawls “Tum Tum” Nairn Jr. is back at Michigan State. 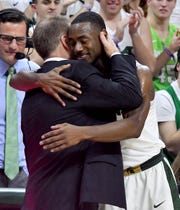 The former Spartans point guard has joined Tom Izzo’s staff as a graduate manager for the 2019-20 season, just two seasons after his playing career ended.

“I can’t say enough about how excited I am to have Tum Tum back here,” Izzo said in a statement. “He’s the type of person who can relate to everyone. Tum Tum is one of the best, if not the best, leaders I’ve ever been around. His teammates loved him here and he’s very close with some of our current players, so it will be great to have him as part of my staff. I know it will be a bit of a transition for him, but I think he will be a great addition and I can’t say enough about his future”

Nairn, the native of the Bahamas who spent last season as a player development coach with the Phoenix Suns, played four seasons at Michigan State and was part of two Big Ten championship teams while reaching the Final Four in his freshman season of 2015.

He spent this summer playing with the national team for the Bahamas.

“God has given me many opportunities in my life that I don’t deserve,” Nairn said. “This is another one of them. I’m thankful to be able to be a part of the staff at MSU. It was an honor to play for Coach Izz and his coaching staff and it is an honor to be a part of his staff.

“This university has a special place in my heart. When I played here, I never took it for granted, so I don’t take being a part of the staff for granted either. None of it would be possible without my Lord and Savior Jesus Christ. I’m super excited for this opportunity.”

Nairn played in 137 games in his Spartans career and started 66, including 30 as a junior in 2016-17. Nairn first entered the starting lineup late in his freshman season but gave way to then-sophomore Cassius Winston in his final season of 2017-18. In that year, Nairn played a season-low 16.7 minutes a game but was universally praised for his team-first approach.

“He is the heart and soul of this team,” Winston said before Nairn’s final home game. “We go as Tum Tum goes, just in terms of our energy and our passion. Those things are way more important than if you can shoot a basketball.”

A three-time captain, Nairn averaged 2.5 points and three assists a game in his career. His best season was in 2016-17 when he averaged 3.5 points and 3.6 assists while playing 22.8 minutes a game.