Bridges Beyond Boxing event pits Detroit vs. Ireland on Wednesday in Eastern Market

Bridges Beyond Boxing event pits Detroit vs. Ireland on Wednesday in Eastern Market

Ireland Bridges Beyond Boxing takes in a Tigers game at Comerica Park during a previous visit to Detroit (Photo: Courtesy of John Carey)

Through boxing, there are life lessons that can extend well past the typical instruction of lead with the left and throw with the right.

With that in mind, Bridges Beyond Boxing formed in Northern Ireland with the purpose of using the ringed sport to foster better understanding among teens in that country’s divided Protestant and Catholic communities, as well as a way to link up with their peers in the U.S.

For the fourth year, the Irish delegation visits Detroit for a night of boxing this Wednesday at Shed 5 in Eastern Market as part of the cultural exchange. Detroit vs. Ireland features 12 bouts with boxers ranging 12-21 in age.

As for the visitors, well, they don’t call them “The Fighting Irish” for nothing.

Bobby Platt from Scorpion Boxing Club is scheduled to fight Hussan Alswareth from Kronk in the 80-pound bantam division.

Money raised from Wednesday event will enable the Detroit group to visit Ireland on the return leg in spring 2020. Such journeys have been eye-opening for Americans inured to violence.

“These kids in Detroit don’t realize there are other places in the world that are tough, too,” said Erik Olson, owner of Thomas Magee’s Sporting House and Whiskey Bar and Bridges Beyond Boxing Detroit Chapter sponsor.

Thomas Magee’s will host the formal weigh in for Detroit vs. Ireland boxers on Tuesday.

“For myself, it was kind of the same thing happening in Detroit. Our slogan is build bridges beyond boxing and bring unity to our community.”

The first exchange nearly fell through due to a lack of interest and money on the Detroit side. The problem was the Irish contingent had bought plane tickets to the Motor City as a measure of good faith, using their credit cards to do so.

Rumblings about Detroit’s inability to keep its end of the deal quickly swept through the North.

Word filtered back to Carey, who put a call in to the United Irish Societies of Detroit. Faygo stepped in as a sponsor.

Ancient Order of Hibernians and Gaelic League have offered support.

Families from Redford, Detroit, Royal Oak and West Bloomfield are hosting Irish boxers on this visit. A Protestant and Catholic boxer are lodged in each home.

John and wife Maggie open their Dearborn home to the Irish visitors.

“The kids we had (last year), the one I don't know if he doesn't listen or what. He didn't know James was Protestant,” Carey said. “He was shocked to live with the Protestant guy for a whole week and didn't even know. So I said to him the program actually does work…” 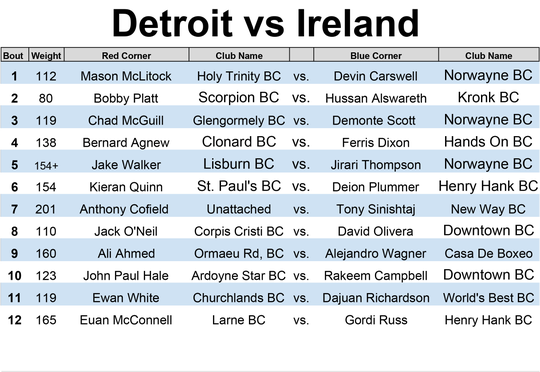