At least five WWE wrestlers were sidelined or refused to participate in WrestleMania 36 because of illness or COVID-19 fears.

Orlando, Fla. — The city of Orlando is making professional wrestling history this week — but not the kind of history it wants, thanks to the coronavirus.

At least five WWE wrestlers were sidelined or refused to participate in WrestleMania 36 because of illness or COVID-19 fears, according to numerous published reports, and more are unhappy the event wasn’t postponed or canceled. 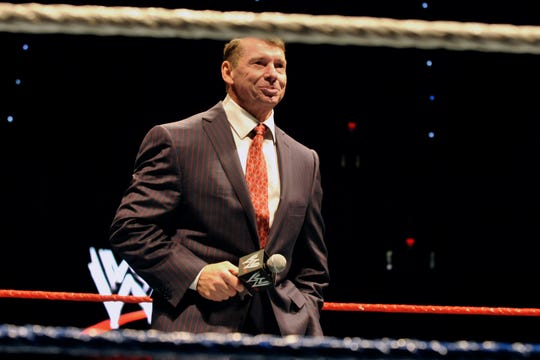 There have been no reports of wrestlers testing positive for COVID-19. However, The Miz came to the WrestleMania taping while displaying symptoms of an undetermined illness and spent time around other wrestlers and staff members before being sent home, according to PWInsider.

Roman Reigns, who had been scheduled for one of WrestleMania’s main events, voluntarily withdrew from the show. According to a report in Pro Wrestling Sheet, he was upset that Miz was allowed in the building with his illness and no longer felt comfortable wrestling in a compromised environment. In 2018, Reigns had a widely publicized bout with leukemia, which is now in remission.

Three other wrestlers who had been scheduled to appear — Rey Mysterio, Buddy Murphy and Dana Brooke — are self-quarantining at home; their conditions are not known. A sixth, Andrade, is off the show with a slight rib injury.

According to PWInsider, pressure to move forward with WrestleMania while so many other sports and entertainment events were being canceled came from the top — WWE chairman Vince McMahon. The recording of the show ended Thursday, just before Orlando mayor Buddy Dyer’s order to close non-essential businesses went into effect.

WrestleMania, which was expected to draw tens of thousands of fans to Raymond James Stadium in Tampa next month, was moved to the WWE Performance Center in east Orlando, where it was recorded Wednesday and Thursday in front of an empty arena.

WWE has not officially confirmed any absences or changes to the WrestleMania lineup — some changes are expected to play out in TV storylines during the next week.

The show, which had been set for April 5 in Tampa, will air April 4 and 5 on the streaming WWE Network. Orlando becomes the third city, after New York and Los Angeles, to host three WrestleManias. The first two, in 2008 and 2017, drew more than 70,000 fans each to Camping World Stadium.

Other main events for the show, including Brock Lesnar vs. Drew McIntyre, Edge vs. Randy Orton and Charlotte Flair vs. Rhea Ripley, remain unchanged.

Below are spoilers for the WrestleMania lineup, but no match results are revealed.

Two Chicago Cubs employees who attended an annual training session at Wrigley Field on March 8 have tested positive for the COVID-19 virus.

One was hospitalized and the other was recovering at home, spokesman Julian Green said.

Green also said there was “nothing definitive” indicating the session “contributed to exposure” since the test results weren’t received until March 23 and 24. But “out of an abundance of caution, transparency and responsibility,” the Cubs informed staff in an email on Friday.

“We know many of these associates know each other, spend time together and speak frequently so we want everyone to take the necessary precautions and follow CDC guidance even though we’re not together and playing baseball,” Green said.

The Cubs said in the email to staff they “reached out to both associates to offer our support.” They also urged employees to monitor their health closely and follow guidelines set by the Centers for Disease Control and Prevention.

Most people who contract COVID-19 have mild or moderate symptoms, which can include fever and cough but also milder cases of pneumonia, sometimes requiring hospitalization. The risk of death is greater for older adults and people with other health problems.

The International Boxing Hall of Fame has canceled its Hall of Fame weekend in June because of the coronavirus pandemic.

Executive director Ed Brophy said that this year’s class will be honored at the induction ceremony in June 2021.

Brophy said combining this year’s class with next year’s into one ceremony will “provide each inductee with the recognition they each so richly deserve.”

The official plaques for the members of the Class of 2020 will be on display at the Hall of Fame beginning in June, Brophy said.

Engineers from a Mercedes Formula 1 team and University College London have helped to develop a new breathing aid for coronavirus patients.

“These devices will help to save lives by ensuring that ventilators, a limited resource, are used only for the most severely ill,” said Mervyn Singer, a critical care consultant at UCLH.

The U.K. team took an off-patent device and improved it to create a model suitable for mass production, according to Tim Baker of UCL. “We were able to reduce a process that could take years down to a matter of days,” he said.

Known as Continuous Positive Airway Pressure, or CPAP, such devices have been used extensively in hospitals in China and Italy to help coronavirus patients with serious lung infections to breathe more easily when oxygen alone is insufficient.

Britain, like many other countries, is struggling with a shortage of life-saving ventilators as the deadly virus spreads. U.K. manufacturers have warned they might need months to respond to the government’s call to ramp up production.

The NHS has less than a third of the ventilators it needs. The makers of the new device said 100 instruments will be delivered to UCLH for clinical trials, with plans for a rapid roll-out to hospitals.