Edmonds surmised he must have been infected for several weeks before the diagnosis.

In a video shared on his Instagram profile, Edmonds said he was “doing really well” and no longer exhibited symptoms of the COVID-19 disease. He surmised he must have been infected for several weeks before the diagnosis. 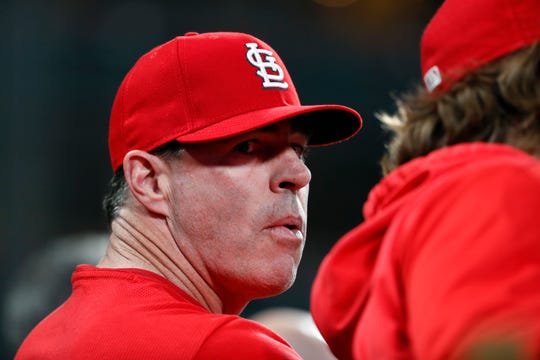 “Thank God I quarantined myself and listened to what everyone said and kept our curve at our home flattened,” he said.

Edmonds was admitted to a hospital for testing Saturday — but only after he convinced health officials to allow him to.

“They didn’t want to test me,” he said, “and I forced them to take me into the emergency room.”

Edmonds, 49, was found to have pneumonia and had to wait several days for the results of the coronavirus swab.

The Braves are marking what would have been opening day at Truist Park with a virtual “At Home” opener.

The team will host a 90-minute, online celebration today that features interviews with manager Brian Snitker, general manager Alex Anthopoulos and star first baseman Freddie Freeman as well as messages from other Braves players. Operatic tenor Timothy Miller will perform the national anthem, joined by popular between-innings features such as Beat The Freeze and the Home Depot Tool Race.

The “At Home” opener will serve as a lead-in to Fox Sports South airing a replay of the Braves′ 2019 home opener against the Chicago Cubs.

British Open organizers say postponement is an option for this year’s tournament at Royal St. George’s because of the coronavirus outbreak.

The R&A released a short statement in response to media speculation about the staging of the event in July. Chief executive Martin Slumbers says the “process is taking some time to resolve” because of a range of external factors.

Slumbers says “we are well aware of the importance of being able to give clear guidance to fans, players and everyone involved and are working to resolve this as soon as we can.”

The 149th edition of the Open Championship is scheduled to take place July 16-19. The last time the Open wasn’t played was in 1945 because of World War II.

The World Games that were more than a year away have been delayed to 2022 because of the coronavirus outbreak.

The Olympic-style event for sports that are not on the Summer Games program had been scheduled for July 15-25, 2021, in Birmingham, Alabama. But those dates now overlap with the Tokyo Olympics, which were delayed for a full year while the world deals with the pandemic.

The International World Games Association and Birmingham Organizing Committee announced Thursday that the 11th edition of the World Games will now be held on July 7-17, 2022.

A European plan is being formed to resume football around July and August, with domestic leagues told not to abandon competitions yet due to the coronavirus pandemic

The determination to ensure competitions are “decided on the field” to protect their integrity was outlined in a letter that was obtained by The Associated Press. It was signed by the heads of UEFA, the European Club Association and European Leagues body and was being sent to their members.

The correspondence was issued hours after the Belgian topflight became the first major European competition to recommend ending its season with the current standings declared final.