Little League International made the announcement Thursday, and it was no surprise given the sports shutdown has no definitive end in sight, amid the COVID-19 pandemic. 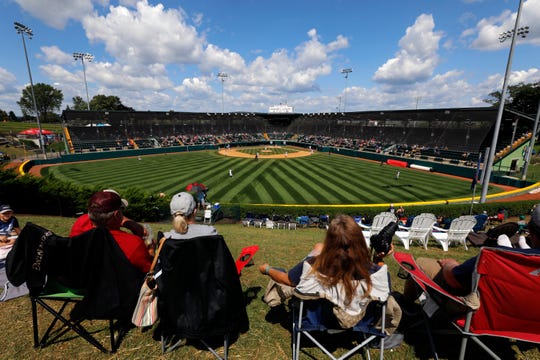 The Little League World Series has been held every August since 1947 (Photo: Gene J. Puskar, AP)

“This is a heartbreaking decision for everyone at Little League International, but more so for those millions of Little Leaguers who have dreamt of one day playing in one of our seven World Series events,” Stephen D. Keener, Little League president and CEO, said in a statement.

Also canceled are the 82 regional qualifying tournaments for the seven championship events.

This will be the first year the Little League World Series won't be held since it was founded. This year was to be its 75th anniversary.

Also, the Junior League World Series, for boys ages 12, 13 and 14, has been held every year since it was founded in 1981. It's played at Heritage Park.

Both tournaments take place in August.

Little League International said Thursday it will credit affiliation fees for programs through the country, a $1.2-million commitment that can be used for current balances, future affiliation and insurance fees, tournament enrollments and other related expenses.

Little League International also urged programs throughout the country to not resume play until after May 11, depending on the health and safety of their respective region.

“Delivering this news comes with a very heavy heart. We have never had to cancel our World Series tournaments, but, right now, as our world comes together, we must do everything we can to help stem the spread of this deadly virus,” Hugh E. Tanner, Little League International board of directors chairman, said in a statement. “While we take this pause from the World Series and Regional tournaments this summer, we are committed to working with our volunteers and staff to continue to provide an unparalleled youth sports experience to all children and be back stronger than ever in 2021.”