The Orchard Lake St. Mary's product and Penn State standout provided some insight into the life of a soon-to-be NFL rookie.

Pontiac's KJ Hamler was looking forward to turning on his television to ESPN Monday night to watch an episode of “Hey Rookie, Welcome to the NFL.”

Hamler, a receiver, was picked No. 46 overall, in the second round by the Broncos where he will be teammates with Jeudy.

The feature provides a behind-the-scenes look at the soon-to-be NFL rookies through the NFL Scouting Combine — which took place prior to the COVID-19 pandemic — and the 2020 NFL Draft.

When Hamler was contacted by phone late Monday afternoon, he said he was thrilled to be a part of the show.

“I’m excited to be in the series. A producer of the show is a Penn State grad and she got Trace McSorley (Ravens) to do it last year and Saquon Barkley (Giants) to do it the year before so she was looking for a Penn State guy,” Hamler told The Detroit News about his former Penn State teammates.

“The first episode was before the coronavirus even happened, so it will probably be some in-person stuff. I was in Florida training for the draft back then. I’m back home now in Pontiac, watched the draft at home, it definitely was an exciting time.”

Hamler — considered one of the fastest players in college football with a 4.27 40 — was filmed in Pensacola, showing off his cooking talent, and also looking at his personal playbook while getting mentally ready for future interviews with coaches and NFL personnel at the combine.

The scene shifted to his hometown of Pontiac, where his mother Tonya Gooding-Hamler stole the show, yelling for KJ to “Run, Forest, Run,” while motivating him to run up hills before making him a fruit drink.

Included is a memorable scene of Hamler watching his first car — a black Scat Pack Dodge Charger — being delivered to his house. It had pink brakes and pink KJ initials on the seat, a tribute to his grandmother, who battled breast cancer.

Hamler, 5-foot-9 and 176 pounds, didn’t participate in running drills at the combine due to a hamstring injury, saying he would display his ability at Penn State’s Pro Day March 17, which was canceled. 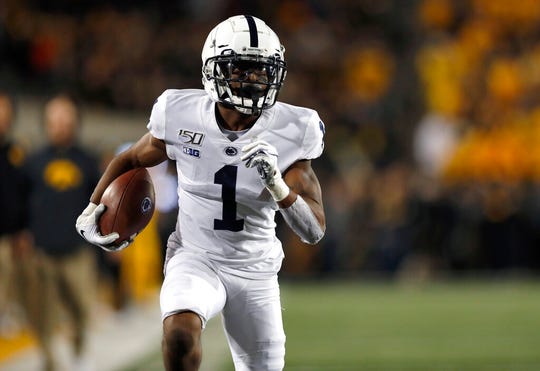 He did compete in the bench press at the combine, getting in 15 reps of 225 pounds in front of Hall of Fame receiver Cris Carter. The best a receiver weighing 190 pounds or less could do before him was 10 reps.

Hamler helped Orchard Lake St. Mary’s to a pair of state championships in 2014 and 2015 before moving on to finish his high school career at IMG Academy in Florida.

Hamler starred at Penn State the last two years, including this past season when he grabbed 56 passes for 904 yards and eight touchdowns, including a 53-yard scoring reception early in the fourth quarter in a 28-21 victory over Michigan.

Hamler talked about his relationship with Jeudy, Brown and Thomas. He doesn’t know when the next episode will be aired due to the pandemic and doesn’t know when he will have minicamp or get to meet his Broncos teammates.

“Jerry Jeudy, who is my new teammate on the Broncos, I’ve known him from high school,” Hamler said. (Jeudy played at Deerfield Beach High in Florida.) “We’ve been good friends since then, played on the same Nike Opening in Oregon. Andrew Thomas, an O-lineman for Georgia, he was down in Pensacola training with me, a fun guy, and I also trained with Derrick Brown in Pensacola, and he’s funny too, so there are some personalities in the series.”

So, what did the Broncos tell Hamler on the future plans of training camp?

“It was more we’ll keep in touch because they don’t know how this COVID stuff is going to go, just whenever stuff clears up they’ll let me know when I can come down to Denver and do all the things I need to do,” Hamler said.

Hamler said he’s been running routes back in Pontiac, along with running hills. He also purchased the JUGS machine, which was showcased on the show with his father putting the ball into play.

“I’m very surprised he hasn’t received some big offers,” said Hamler of Trainor, who completed 74.5 percent of his passes his junior year, throwing for 3,845 yards and 44 TDs with just four interceptions to lead Walled Lake Western to the Division 2 state semifinals. “He’s a very accurate QB, very consistent. He’s throwing dimes, and with me he did that, a guy he’s not used to. I went out there with Donovan Peoples-Jones and Tre Mosley and he was right on the money every time with the deep ball too.”

KJ Hamler has found a way to be in the spotlight even in the tough times of the pandemic.