Suspended West Virginia defensive coordinator Vic Koenning apologized Wednesday after a player alleged he made a series of insensitive remarks, including against Hispanics.

Koenning was placed on administrative leave Tuesday after safety Kerry Martin posted the allegations on his Twitter account about Koenning. 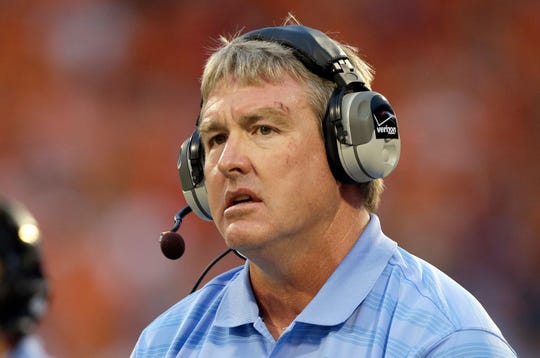 FILE - In this Sept. 27, 2014, file photo, Vic Koenning, at the time the defensive coordinator at North Carolina, watches during the first half of the team's NCAA college football game against Clemson in Clemson, S.C. (Photo: Bob Leverone, AP)

“I never intended anything I said or did to offend or be insensitive,” Koenning said in a statement on Twitter Wednesday. “But KJ’s Tweet reminded me that sometimes intent is not always clearly communicated.”

Martin said the latest example of offensive comments by Koenning happened Monday, when the defensive coordinator shared a conversation he had with his son about protests over racial injustice. Martin, who is Black, said Koenning’s “exact words were, ‘if people did not want to get tear gassed, or push back by the police then they shouldn’t be outside protesting.’”

Martin also said Koenning called him “retarded” during a 2019 workout, has discussed religion and the Bible with players who had different beliefs, and has given his views on politics, including how President Donald Trump “should ‘build the wall and keep Hispanics out (of) the country.’”

Koenning apologized to Martin and the school community in his statement.

“I’m still learning every day and this is an opportunity for me to listen, learn and improve,” he said. “Of course I stand against racism and social injustice of any kind. I hope my players know that already, but I proudly say it now. There is no place for that any time, anywhere or any place.”

Koenning, who was brought to West Virginia from Troy when coach Neal Brown was hired last year, said he is cooperating with the athletic department’s inquiry into his behavior.