Weighted balls, brick walls: How Tigers' Kyle Funkhouser got his groove back

Funkhouser has gone from out of the mix to having a legitimate shot at being on the Opening Day roster.

Weighted balls, brick walls: How Tigers' Kyle Funkhouser got his groove back 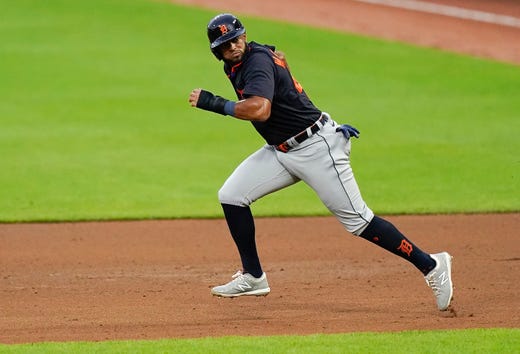 Detroit Tigers' Willi Castro advances to second base on a wild pitch in the eighth inning of an exhibition baseball game against the Cincinnati Reds at Great American Ballpark in Cincinnati, Wednesday, July 22, 2020. Bryan Woolston, AP
Fullscreen 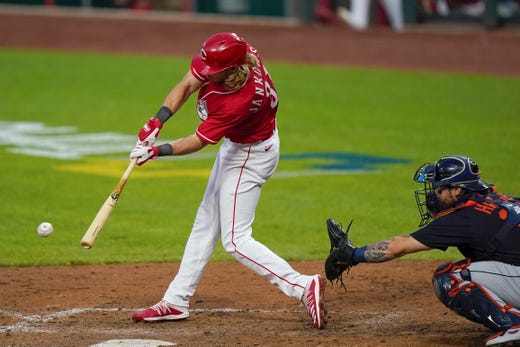 Cincinnati Reds' Travis Jankowski (31) singles on a ground ball to right field in the eighth inning of an exhibition baseball game against the Detroit Tigers at Great American Ballpark in Cincinnati. Bryan Woolston, AP
Fullscreen 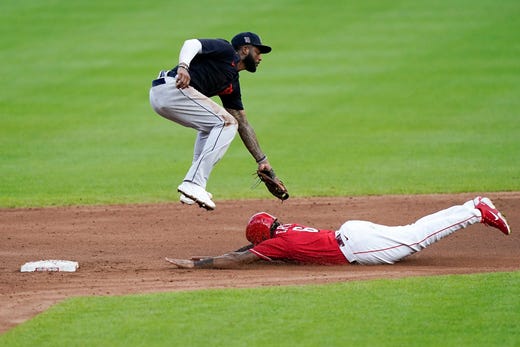 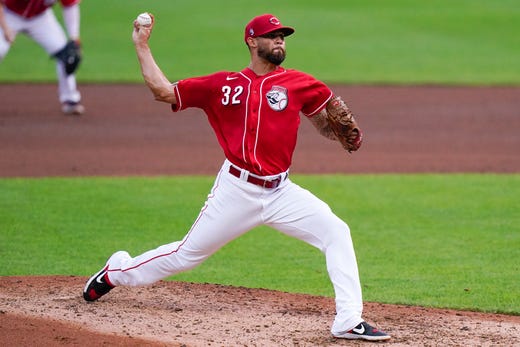 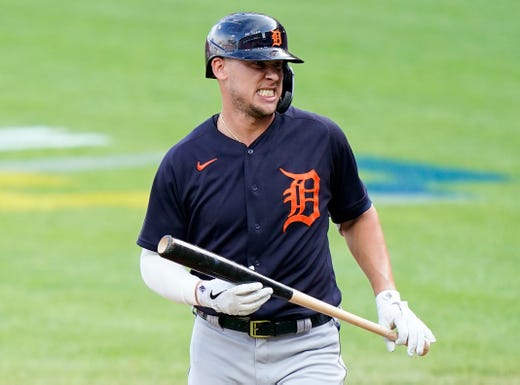 Detroit Tigers outfielder JaCoby Jones reacts after being hit in the leg by a ball in the second inning of the exhibition game against the Cincinnati Reds at Great American Ballpark in Cincinnati, Wednesday, July 22, 2020. Bryan Woolston, AP
Fullscreen 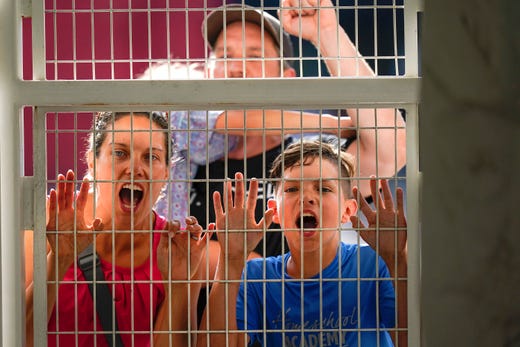 Fans cheer for the Detroit Tigers from outside The Great American Ballpark the second inning of the exhibition game against the Cincinnati Reds in Cincinnati, Wednesday, July 22, 2020. Bryan Woolston, AP
Fullscreen

Cincinnati Reds shortstop Freddy Galvis (3) throws to first for the double play the second inning of the exhibition game against the Detroit Tigers at Great American Ballpark in Cincinnati on Wednesday Bryan Woolston, AP
Fullscreen 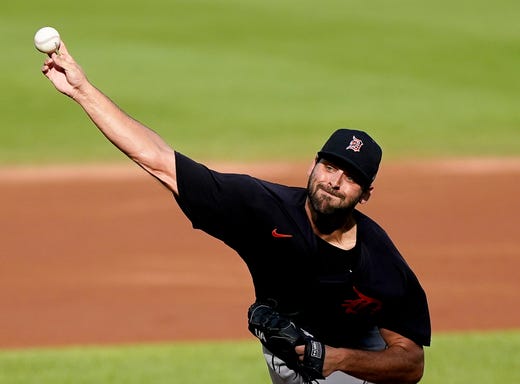 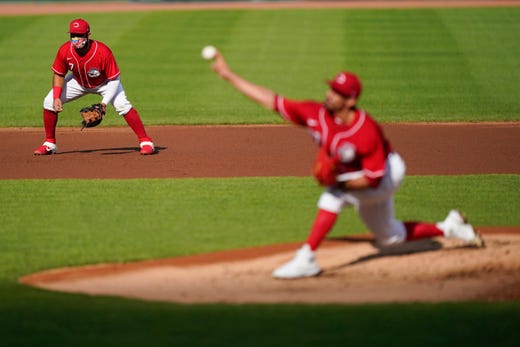 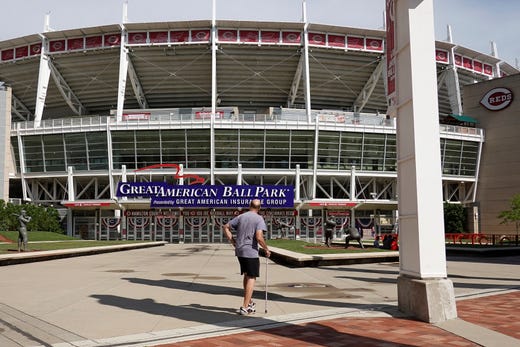 Steven Taylor, of Cincinnati, walks past The Great American Ball Park prior to an exhibition baseball game between the Cincinnati Reds and the Detroit Tigers in Cincinnati, Wednesday, July 22, 2020. Bryan Woolston, AP
Fullscreen 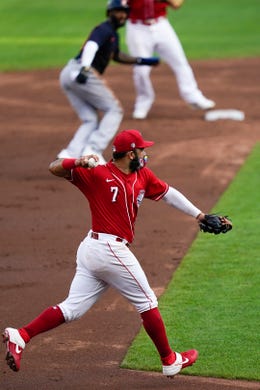 Cincinnati Reds third baseman Eugenio Suarez (7) throws to first for an out the second inning of the exhibition game against the Detroit Tigers at Great American Ballpark in Cincinnati. Bryan Woolston, AP
Fullscreen

Cincinnati — Day after day, regardless of how chilly those Chicago winds were howling back in March, Tigers right-hander Kyle Funkhouser would be outside throwing weighted balls against a brick wall. Thunk, thunk, thunk.

It was mentally therapeutic — nothing like slamming things against a brick wall to vanquish the anguish of being one of early cuts in spring training — and physically, it was revelatory. The thing about throwing weighted balls for a pitcher, if you don’t throw them with proper mechanics, you can hurt yourself. It forces you to streamline your mechanics.

Which, turns out, is exactly what Funkhouser needed.

“I’ve come a long way in just a few months,” said Funkhouser, who after a scoreless inning against the Reds on Tuesday has thrown six scoreless camp innings with seven strikeouts. “I went home (after the shutdown) and really worked on some things. I tried to simplify some things.

“For the first month of the quarantine I was throwing weighted balls against a brick wall and I found some things that clicked there.”

With the help of the Tigers’ organizational pitching coordinator Dan Hubbs and Toledo pitching coach Juan Nieves — and the weighted balls — Funkhouser found a way, long story short, to shorten his arm path which has not only helped him get his fastball velocity back up to the mid-90s, but also regain the late, heavy life.

“I went back and watched some old videos from the college days and from the early pro days,” said Funkhouser, who was a star at the University of Louisville and once a first-round draft pick of the Dodges. “We all felt my arm action was getting too long. Just tried to shorten that up a little bit, be short and quick, get your arm to the spot and the rest just flows.

He was none of those things in Lakeland. And coming off a forgettable season at Triple-A Toledo (8.53 ERA, 2.1 WHIP), it was a bit of a surprise the Tigers added him to the 40-man roster. He was sent back to minor league camp on March 10 and two days later he was on his way back to Chicago.

Had to be a lonely trip. 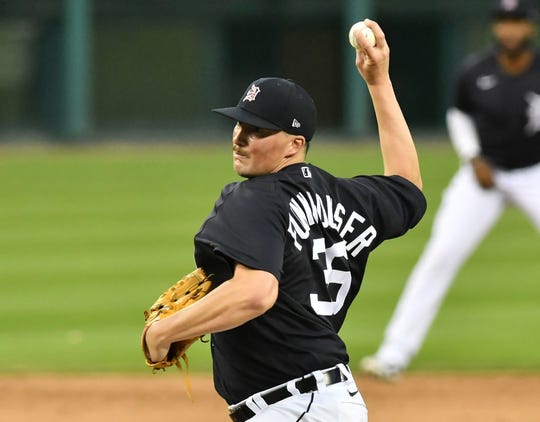 “Pretty low,” he said. “I had a rough year last year, made some off-season adjustments, or tried to. I came to camp and I was feeling good a little bit, but I quickly fell back into old habits. Going home really did a lot for me.

“I was by myself a lot, throwing the weighted balls, really just trying to feel things out (mechanically) and make adjustments day by day based on what felt good.”

By the time he took the mound in the seventh inning Tuesday, six balls had already flown out of Great American Ballpark. It was a hitter’s night, for sure. But that didn’t faze Funkhouser, who dispatched the Reds on 10 pitches.

More: Players make BLM statement, then it's bombs away in Tigers' exhibition loss

Freddie Galvis led off with a single, a sinker that jammed him but he was able to roll it down the third base line against the over-shifted defense. He got the next three hitters — Nick Senzel (pop to short, deft running catch by Willi Castro), Tucker Barnhart (soft liner to third) and Shogo Akiyama (grounder to short).

Ten pitches, six strikes, nothing hit hard, even on two 2-0 swings — no barrels.

He’s gone from out of the mix to, quite frankly, a legitimate shot to make the 30-man roster. Nobody on the roster bubble is throwing any better than he is right now. Let’s hear it for weighted balls and brick walls.

“I’m completely in the dark,” he said about his chances to make the club. “Obviously, being there for summer camp was an honor, being here in Cincinnati is an honor. I think I’ve been throwing pretty well and trying to get a little bit better each outing.

“I’m just trying to put myself in a good position, trying to make it hard for management and the coaching staff not to keep me.”