Muschamp said Wednesday that Harris will start next week against Georgia. 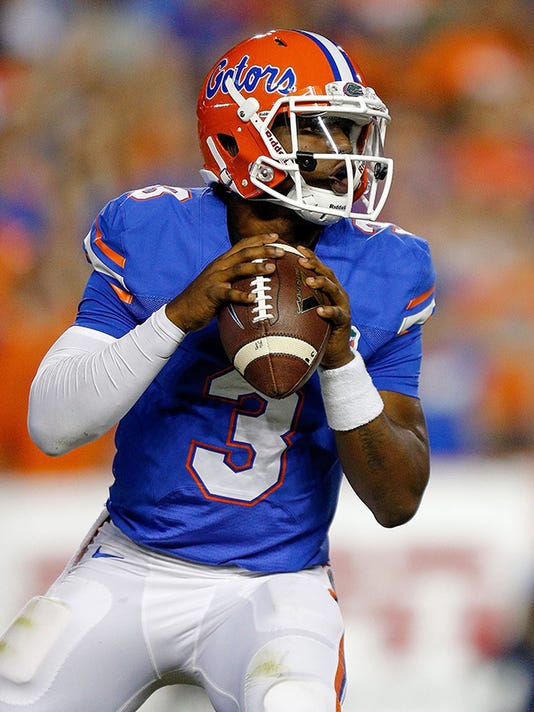 Will Muschamp on Treon Harris: “He has a knack for making plays and making some good things happen for our football team.” (Photo: Rob Foldy / Getty Images )

Gainesville, Fla. — With his job on the line, Florida coach Will Muschamp has turned to freshman quarterback Treon Harris.

Muschamp said Wednesday that Harris will start next week against Georgia in Jacksonville, adding that it will be Harris' game from start to finish.

The move means the Gators (3-3, 2-3 SEC) have benched fourth-year junior Jeff Driskel, who has 12 turnovers the last four games.

Driskel has an ankle injury, but the decision has more to do with getting more out of Florida's struggling offense. Muschamp said Driskel "certainly is going to have a role in that game."

Harris replaced Driskel at Tennessee earlier this month and helped Florida rally for a victory. He also made some plays down the stretch in a lopsided loss against Missouri last week.

"We've got an open week now where he's getting a bunch of reps. Jeff's still going to have a role on our football team as a quarterback. Right now we feel like that was the best move moving forward."

The Gators rank 98th in the country in total offense and really floundered in consecutive losses to LSU and Missouri.

Florida had six turnovers in a 42-13 loss to Mizzou on Saturday. Driskel had four of those, including a fumble and an interception that were returned for touchdowns. He was booed relentlessly, and chants of "Fire Muschamp" echoed throughout an emptying Florida Field in the second half.

"The guys are a bunch of prideful guys that certainly understand that was an embarrassing performance coaching-wise and playing-wise," Muschamp said. "We can't afford to turn the ball over. We've lacked production and explosive plays at the quarterback position. I think couple all those things together, we've struggled."

Driskel has completed 53 percent of his passes for 928 yards this season, with six touchdowns and 10 interceptions.

Harris, who missed a week while authorities investigated a sexual assault complaint against him, is 12-of-18 passing for 263 yards, with three TDs and an interception. The university released the police report about the incident Wednesday, the same day Harris was named the starter.

The report states that at this time, the case is being closed.

Driskel missed most of last season with a broken right leg, and the team was woefully prepared to play without him. The Gators finished 4-8 in their first losing season since 1979.

Muschamp was given a chance to turn things around, but the offense has shown little improvement under new coordinator Kurt Roper.

There were reports that Muschamp would be fired after the debacle against Missouri, but athletic director Jeremy Foley opted to keep him around for at least another game.

"We need to win some games," Muschamp said. "I think Jeremy sees a lot of the things that are going on in our program and certainly a huge part of that is winning games, and that's not what we've done. But academically, socially, all the things we've done within our program in changing the culture have been outstanding."

Muschamp is 25-19 in four seasons at Florida, including 15-14 in conference play.

He has two weeks to prepare for ninth-ranked Georgia, his alma mater. The Bulldogs have won three in a row in the series. Another one could mean the end for Muschamp.

"We've just tried to control the controllables," he said. "We need to play better. That's the bottom line. We need to coach better. So those are the things we need to focus on -- improving ourselves and finding an identity offensively in what we can do and what we can do well. And block out as much as you can.

"You're going to hear it. That's part of it playing at a place like the University of Florida."