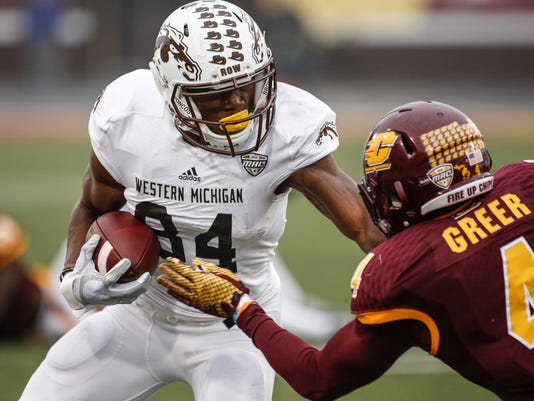 Kalamazoo – — P.J. Fleck was hired as head coach at Western Michigan two years ago to change the culture surrounding the football program, one day leading the Broncos to a Mid-American Conference championship.

Fleck, the youngest head coach in the country at age 34, has guided the Broncos to a tremendous turnaround in his second year, going from 1-11 his rookie season to 8-4 with a Famous Idaho Potato Bowl date with Air Force (9-3) today in Boise, Idaho.

The Broncos can earn their first bowl win in school history after coming up short in their previous five chances, including 0-3 under Bill Cubit. Western lost 37-32 loss to Purdue in the Little Caesars Pizza Bowl in 2011.

When Fleck was hired by Kathy Beauregard in December 2012, he said he wanted the Broncos to follow in the footsteps of Boise State, becoming a mid-major power playing in elite level bowl games. Now, they will be playing on Boise State's blue turf while the team he admires will be competing in the Fiesta Bowl.

"I think any, I guess you call them, mid-majors' goal, is to do what Boise's done the last 10 years, I think that's everybody's goal when they sit there and say, 'this is the blueprint we want,' " Fleck said earlier this month while the Broncos were preparing to face an Air Force team which defeated Boise State (28-14) and Colorado State (27-24) this season.

Well, Fleck and his staff have recruited well and the result has been a true freshman running back in Jarvion Franklin, who became the first player in Mid-American Conference history to be named MAC Freshman of the Year and MAC Offensive Player of the Year in the same season.

Franklin is 10th nationally in rushing with 1,525 yards and could be the Broncos' single-season record holder with 144 yards today. He already owns the school record for most touchdowns in a season with 24.

Western's running game has opened things up for redshirt sophomore quarterback Zach Terrell, who has completed 70 percent of his passes for 3,146 yards and 23 TDs, working with multiple weapons, including sophomore Corey Davis (70 receptions, 1,232 yards, 12 TDs) and redshirt sophomore Daniel Braverman (79, 912, 6).

And Fleck is thrilled to have them all coming back next season when the Broncos host Michigan State on the Friday of Labor Day weekend at Waldo Stadium and when they travel to Ohio State a couple of weeks later to face the Buckeyes.

But Fleck isn't concerned about the future. His focus is on facing Air Force, and he's thrilled the Broncos will be kicking off the bowl season.

"It's really cool," Fleck said. "The last few years I've always watched the bowl season and it's always exciting December 20th, the first bowl games. Then, it's like ... 'another bowl game' in the middle, then you really get excited at the end again. I'm really glad we're right at the front, kicking off the bowl season.

And Fleck knows a bowl victory is the first step of raising expectations.

"It's not a secret, 110 years of history without a bowl win so you're talking about a team that doesn't have much tradition," Fleck said. "The first step would be winning a bowl game, but it doesn't get much tougher than playing Air Force and a service academy. These are kids that pick a school to get a full-ride scholarship, yes, but on the back end of that, they have the four to five years to serve so these are young men who will be serving our country.

"And, on the other end of that, they went from 3-and-9 to 9-and-3 so those are the type of people I want defending my country at the end of the day. They've been through adversity.

Air Force has run the ball more than any other team in the country (732 attempts), rushing for 3,266 yards, an average of 272.2 yards on the ground per game, but the Falcons will be without leading rusher Jacobi Owens (1,054) due to a foot injury.

Terrell benefited from getting several starts last year while taking a few lumps along the way.

WMU offensive coordinator Kirk Ciarrocca worked with Ravens quarterback Joe Flacco while the two were at Delaware nearly a decade ago, and while Terrell doesn't match Flacco in size or arm strength, he does in work ethic and knowledge of the game.

"The thing about Zach is he has an unbelievable work ethic and he's a very intelligent young man too," Ciarrocca said. "I don't know if I ever coached anybody that when you make a correction and he immediately gets it, and once he gets it right he doesn't lose that again.

"That experience from last year really helped him and he started growing and he studied hard and understands defenses better. You could see last year the game was going fast-forward to him, then it started to slow down.

Terrell has never been better than during the final two-thirds of the season, completing 75 percent of his passes for 2,222 yards and 17 touchdowns to help the Broncos win six of their final eight games.

"People asked me at the beginning of the year, 'What's your goal for Zach?' " Fleck noted. "I told them to run our offense efficiently you've got to be around 70 percent, and everybody laughed and joked and I said that's what it will take. We're 8-4 because we have a running game which can open up some things in the play-action game. We put Zach in a good position to succeed. We always want to be able to do that. Coach Ciarrocca is one of the best coordinators in the country. He puts people in position to always be successful.

"Corey (Davis) is the hardest worker on our football team and that's what makes him special. He has a ton of athleticism and his attention to detail and his willingness to learn and get better on a daily basis is above and beyond many people I've been around. His work ethic is very similar to Vincent Jackson's, who I coached at Tampa (Bay Buccaneers). They're very identical in terms of their work ethic. I think Corey's one of the top five receivers in the country and I'm proud to have him on our team."

Terrell is thrilled with the opportunity to play in his first bowl game.

"Everybody's goal during the season is to get to a bowl game so it's exciting," Terrell said. "There's a lot more at stake in a bowl game and we obviously want to win the first one in school history. We wanted to go from worst to first. We had a really good season, but we fell short of our ultimate goal. Now, we want to win that bowl game."