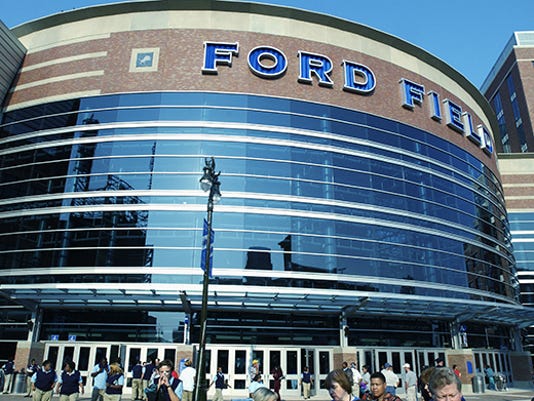 Ford Field would be the site of the championship game.(Photo: Darron R. Silva, Getty Images)

Detroit — Since hosting baseball's All-Star Game in 2005, the Super Bowl in 2006 and the Final Four in 2009, many sports fans have been waiting to see what the next major sporting event in Detroit would be.

The answer could be coming soon.

The Detroit Sports Commission submitted a bid to host the 2019 College Football Playoff national championship game at Ford Field. Detroit is one of a group of about eight to 10 cities that have submitted bids for 2019; others are believed to be Atlanta, Charlotte, Houston, Miami, Minneapolis, New Orleans and San Antonio.

After a hiatus from the major-events scene, DSC executive director Dave Beachnau is excited to be back in the running for a big-time event.

"It feels great. For a while it's been, 'What's next?'" Beachnau said Wednesday. "This is an event that people are really excited about. College football has always been big, but with this attention the national championship game is getting, it would be unbelievable for the city."

The economic impact of hosting the game and the associated other events could be huge for Detroit. Dallas, which hosted the title game last season, reported a $300 million impact.

Beachnau said the budget for Detroit's proposal was around $13 million, which could be raised by the yet-to-be formed host committee, through public and private donations.

"We'll create a host committee and their charge will be to raise those funds through public and private contributions and sponsorships, like Super Bowl and Final Four," Beachnau said. "The city doesn't pay for these events; it's through a process of raising money in the community."

There are logistical challenges, though, as Cobo Center won't be available because of preparations for the auto show. But that will allow for more venues to be used for the other events, including the new Red Wings arena, which is set to be completed in summer 2017.

Comerica Park, with surrounding Brush Street and Adams Street, could host a major tailgate party and a concert would be at the Red Wings arena, along with a kickoff event at Fox Theater and a fan fest at another venue.

One obvious issue is hosting a big event during potentially poor weather in January. For Beachnau, it's not necessarily a deterrent.

"People understand it's Michigan in January and you play into it. It can be a positive; it doesn't have to come across as a negative," he said. "With some of those venues we have access to, we can build off some great programming."