Bielecki played a major role in transforming Wayne State’s middle-tier defense in 2013 into one of the GLIAC’s best. 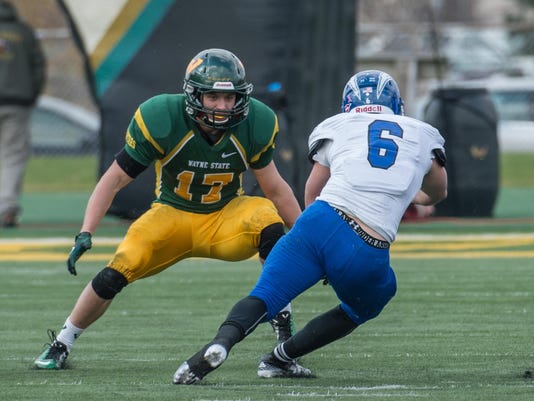 It was an adjustment and a blessing for someone who played practically every snap his senior year at Macomb Lutheran North, a relatively small private high school.

With Jones gone the following year, Bielecki played sparingly in 2012 but injected fire and emotion into the defense and the kickoff and punt coverage teams, recording 16 tackles in six appearances. By the time the 2013 season rolled around, the hard-hitting defensive back had shot up the depth chart and claimed the starting job.

In Wayne State’s second game against Ashland, though, Bielecki soon found himself back on the sidelines after breaking his left foot. He eventually returned in Week 6 and played the rest of the season, finishing with the fourth-most tackles on the team (43) despite missing four games due to the injury. Bielecki also won back his starting spot for the final six games — a role he’s held ever since.

Then last season, Bielecki’s emergence helped spark a defensive resurgence. He started all 11 games at free safety, leading the team and finishing fifth in the GLIAC in total tackles (101) and tying for the league lead in solo tackles (73) with All-American linebacker and teammate Nores Fradi. His 6.6 solo tackles per game tied for first in the league and ranked ninth nationally.

“I have one of the best coaches in the country in (defensive coordinator and defensive backs coach) Coach (Brad) Wilson,” said Bielecki, who was named to the GLIAC All-Academic Team the past three seasons. “His defense really helps my game with coming down on the run and just being aggressive.”

Bielecki played a major role in transforming Wayne State’s middle-tier defense in 2013 — one that surrendered 31 points and 375.7 yards per game — into one of the GLIAC’s best in 2014, which ranked first in sacks (32), third in yards per game (338.5) and fumble recoveries (13), and fourth in points per game (21.4). As a unit, Wayne State also led the league and ranked eighth in the nation with 9.3 tackles per loss a game.

As a result, Wayne State posted a respectable 7-4 record, marking its fourth season with at least seven victories since 2000. Compared to 2013’s forgettable 3-8 campaign, the offense made great strides, scoring 114 more points. Yet the defense improved just as much by allowing 106 fewer points, something Bielecki attributed to better leadership.

“It was an awesome year to be a part of that, finally finish a whole season and be able to help lead our defense,” he said. “Nores Fradi, last year’s captain and outside linebacker, was a huge part of it. He had some of the most fire and passion I’ve ever seen in a player.

“Also guys were buying in. My freshman year is when the new coach (Wilson) came in and with that there were a few guys who really didn’t buy in right away. Once we got all the guys to buy in, that’s when we came together and started playing good defense.”

Yet the 6-foot-1, 203-pound redshirt senior isn’t completely satisfied with last season’s progression. Three games were lost by three points or less, including a pair of agonizing defeats on last-second field goals by Michigan Tech in Week 1 and Northern Michigan in Week 7.

With an emphasis on finishing games this upcoming season, Bielecki is also aiming for more turnovers and takeaways from himself and the entire defensive unit.

“We had a lot of sacks (last year). This year we want to score on defense and be even more aggressive when it comes to our pass defense because sometimes we give up a lot of yards but don’t give up touchdowns,” Bielecki said. “We’re hoping to be a stout defense across the board on the field.

“I’ve always been a solid tackler, but that’s not always enough. You can make a tackle 10 yards down the field, but it’s still a first down. If I can come in and force a fumble, that changes games.”

Heading into his final season, Bielecki was named to the USA College Football’s preseason All-American honorable mention team and selected as one of the team’s four senior captains, a pair of unexpected and humbling honors.

But the biggest adjustment Bielecki will have to make in all his years at Wayne State is the once-in-a-lifetime chance to play with his younger brother Andy, a freshman strong safety who is coming off an ACL injury, for the first time.

“The best thing about it is I never thought I’d play with my brother,” he said. “Having this last opportunity to play with him, I definitely have to take advantage of it and make it a special one.”

And, just maybe, a familiar scene will unfold with one Bielecki waiting in the wings and learning the ropes from an All-American safety.

James Hawkins is a freelance writer.