Eastern Michigan's Shaq Vann celebrates in the arms of Cody Tuttle (5) after scoring against Western Michigan during the first half. Duane Burleson, Associated Press
Fullscreen 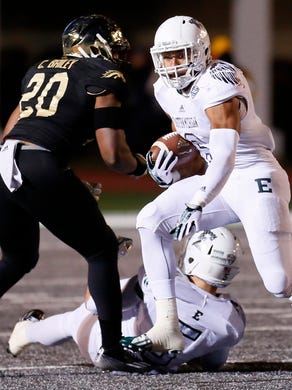 All you had to do was watch the Mid-American Conference game between the teams on a cold, misty Thursday night at Rynearson Stadium before a sparse crowd of 3,534.

Redshirt freshman Jamauri Bogan ran for 61 yards and a career-high four touchdowns to lead the Broncos (5-3) to a 58-28 victory over the Eagles to remain unbeaten in MAC play at 4-0 while also walking away with the Michigan MAC Trophy, after defeating Central Michigan 41-39 earlier this month.

It was the Eagles’ seventh straight loss, and they are 0-5 at home.

“All week people have said, ‘Oh wow, you’ve lost three out of four there (at EMU) and no one’s really swept the trophy two years in a row,’ ” Western Michigan coach P.J. Fleck said, “but this team is about creating a new identity, it’s about rebranding, supporting everybody in the past and giving something to cheer for now, playing in the present, but also for all future Broncos to look at and say that’s where we want to be because of the culture.”

EMU (1-8, 0-5) led 7-6 in the opening quarter and had a chance to build on the lead, but Brogan Roback’s throw under pressure was intercepted by Asantay Brown at the 3 and he returned it to the 31. It was the first of four turnovers the Broncos forced.

The Broncos took advantage of the turnover with Bogan busting loose for 33 yards to EMU’s 25, followed by Zach Terrell’s 20-yard pass to Corey Davis to set up Bogan’s 2-yard run for a 13-7 lead. They led the rest of the way.

WMU had six rushing touchdowns, scoring three of them during the first six minutes of the second half to open up a 44-14 cushion.

“The offensive line blocked beautiful today, it was like a lot of my touchdowns were basically like walk-ins,” said Bogan, who entered the night with three touchdowns. “Coach (Fleck) at halftime told us we were going to come out and run the ball and that’s what we did. The offensive line came up big and we just kept running.

“As I was going into the game, I was thinking as the season goes on it gets colder. Now, the games actually matter. You play in September and October for the games that matter now and now they actually matter because we set ourselves up.”

Fleck was proud of how the Broncos came out and played early in the second half. He was pleased with how the defense forced the turnovers, but still feels they have to get better on that side of the ball, adding injuries have hurt them. EMU had 489 total yards, 226 rushing. WMU sophomore linebacker Robert Spillane was helped off the field early in the first quarter and didn’t return.

“That was huge for us,” Fleck said of the 21 points to open the second half. “The great thing is we came in at halftime and our players understood exactly what we needed to be able to accomplish. They were already meeting and already getting after each other and saying what they demanded. That wouldn’t have happened last year or the year before that. They would have waited for us. The leadership is starting to build on this football team and that’s key.

“Turnovers is the name of the game. They had four and we had zero, and that’s a few weeks in a row and again the ball’s the program.”

The Broncos scored on a two-play, 52-yard drive on the opening drive of the second half with Terrell finding Daniel Braverman for 27 yards and Jarvion Franklin followed with a 24-yard touchdown run for a 30-14 lead.

Then, after an interception by Ronald Zamort at the EMU 26, Bogan scored on a 2-yard run and Terrell followed on the next drive with a 31-yard touchdown run with 9:09 left in the third for the 30-point lead.

Even Tom Flacco — the younger brother of Ravens quarterback Joe Flacco – got into the act, throwing a 64-yard touchdown pass to Michael Henry with 7:51 left for a 58-21 lead.

WMU made drastic improvements in Fleck’s second year as head coach last season, going from 1-11 to 8-5 and a bowl appearance.

EMU is struggling in Chris Creighton’s second year as head coach. The Eagles entered the night with one of the worst defenses in the country, allowing 44.5 points and 521 total yards, 340 on the ground. They now have just one MAC win in 13 games under Creighton.

And, the Broncos’ scoring output made it the sixth straight game EMU allowed 44 or more points. WMU piled up 595 total yards, 279 on the ground on 36 carries.

Terrell didn’t match those numbers Thursday, but he still was impressive. He completed 17-of-23 for 252 yards without a turnover, also rushing for 72 yards and the touchdown.

Terrell has 10 touchdowns without an interception in MAC play.

One of EMU’s lone bright spots this season has been the running of senior Darius Jackson who has 894 yards, five 100-yard games and 12 TDs. He had 95 yards on 17 carries Thursday.

The Broncos are still in the hunt for their first MAC championship since 1988 and first MAC West title and conference championship game appearance since 2000 while the Eagles are still struggling, knowing they will have their 20th straight season without a winning record.

WMU has played mid-week games before, but not Terrell and the rest of this group of players.

WMU athletic director Kathy Beauregard said the MAC office releases the schedule and she has no control of the mid-week games, but feels the television is good exposure for the program.

Beauregard doesn’t know what to expect for next Thursday’s home game against Ball State, but feels 15,000 fans could be possible. It could be a larger crowd with the Broncos having a chance to become bowl-eligible with a win.

Beauregard said the season ticket sales increased 21/2 times with Michigan State playing at Waldo Stadium in the season opener. She said a lot of fans added a mid-week game to Pick-3 option on the home schedule.