Herbstreit apologized Sunday to Baylor and Terrell Burt after accusing the senior safety of faking an injury. 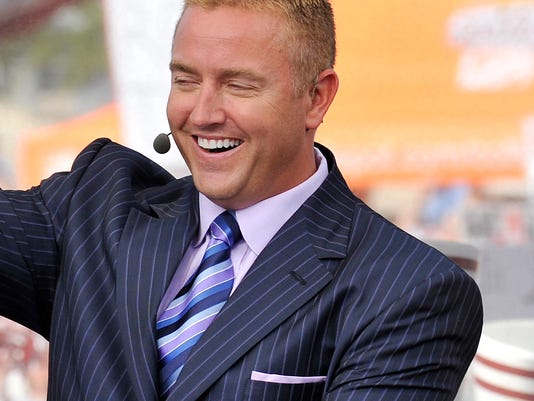 Waco, Texas — ESPN commentator Kirk Herbstreit apologized Sunday to Baylor and Terrell Burt after accusing the senior safety of faking an injury during the Bears’ loss to Oklahoma.

“I’d like to apologize to @BUFootball & Terrell Burt. Last pm I thought he had faked an injury and I was DEAD WRONG,” Herbstreit wrote on Twitter.

With the No. 7 Sooners lining up for a play with 9:44 left in their 44-34 victory Saturday night, Baylor cornerback Ryan Reid suddenly ran toward Burt and motioned for him to get down to the ground. Burt then bent forward and rolled over onto his back, prompting an injury timeout.

What was unknown at the time was that Burt had sprained his right ankle on the kickoff before Oklahoma had already snapped the ball twice on that drive.

During the broadcast, when thinking it was a fake injury, Herbstreit was critical with his comments while Burt was being tended to by trainers and a replay was shown.

“I’ve never seen anything like that in my life,” Herbstreit said during the ABC broadcast. “That is awful. Now he’s going to fake a limp. I mean that is bush league. I don’t get that. … This is football. That’s unethical. You don’t do that.”

Even when fellow broadcaster Chris Fowler asked if it was possible that Burt was hurt, Herbstreit quickly responded, “No, he was ready to play.”

Burt had his ankle re-taped on the sideline and missed eight or nine plays before returning at the end of that drive that resulted in Oklahoma’s final touchdown.

Herbstreit acknowledged in his apology Sunday that Burt was trying to fight through an ankle injury and kept playing until a teammate forced him to sit down to get treated.

“I saw what I saw at the time and didn’t realize he had tweaked it earlier. I take full responsibility and apologize sincerely to Terrell,” he posted.

The move, announced Saturday, came on the heels of ULM’s 59-21 loss to Arkansas State, which dropped the Warhawks to 1-9.

Wickstrom said defensive line coach John Mumford will serve as interim head coach for the rest of this season, after which a search for a new coach will take place.

Berry has been ULM’s head coach since 2010 season.

Wickstrom says Berry “raised the level of the program” and brought it national attention in 2012, when ULM played in the Independence Bowl.

However, this year’s struggles have come during construction of a new $4.1 million end zone addition to Malone Stadium, which was funded by private donations.

Rutgers center Derrick Nelson left a hospital after being carted off the field following a helmet-to-helmet collision late in a game against Nebraska.

The university says the junior was released from Robert Wood Johnson University Hospital on Saturday night, walking out under his own power.

Nelson was hurt with 58 seconds left in the game trying to make a tackle after Nebraska intercepted a Chris Laviano pass. He lay on the field for at least five minutes before being loaded onto a cart.

Rutgers coach Kyle Flood said after the game that Nelson had movement in his extremities.