NFL dream is in sight for former MSU center Allen

Allen will be one of three Michigan State players on the North team.

NFL dream is in sight for former MSU center Allen 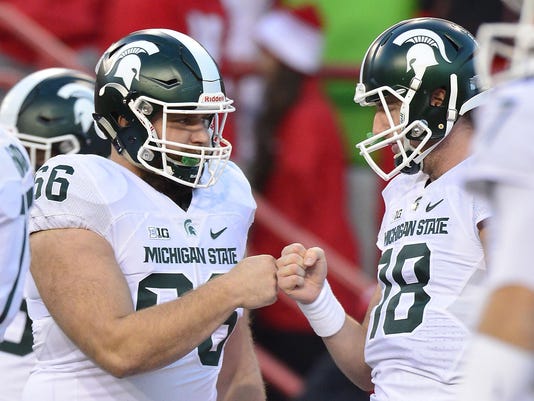 During Jack Allen’s senior season at Michigan State, he thought his NFL dreams were still off in the distance.

Now, as he prepares for the Senior Bowl this week in Mobile, Alabama, the former Spartans center realizes the next step in his football career is drawing near.

“Until the last half of the season, I kind of thought that I’ll have all the time in the world, but it comes quick,” he said.

Allen will be among the college all-stars trying to boost their stock in the NFL draft this year. He’ll be one of three Michigan State players on the North team, along with wide receiver Aaron Burbridge and defensive lineman Lawrence Thomas.

Former Western Michigan guard Willie Beavers will join the Spartans players on the North while former Michigan center Graham Glasgow will be on the South team.

Allen was a first-team All-American and he’ll be one of the top offensive linemen at the Senior Bowl. During the week, scouts and coaches will closely evaluate his performance in various drills leading up to Saturday’s game.

“I think it’s just kind of another opportunity for me to be able to see where I’m at and play against the best competition,” Allen said.

In advance of the all-star game, Allen has been training in Santa Ana, California, in a program set up by his agency. After being in East Lansing the past five years, Allen said he’s looking forward to seeing a couple of his teammates after nearly a month away.

Allen also said he’s excited to work with the Cowboys coaching staff, which will lead practices for the North team, because he wants to see other ways to learn offensive line play.

Although Allen expects to play primarily center this week, Senior Bowl coaches often have players work at other positions to determine how versatile they could be in the NFL. Allen started five games at left guard as a redshirt freshman, so he’s comfortable there. He also said he jokingly would fill in at left or right tackle at times during practice, though he’ll likely work primarily on the interior.

ESPN draft analyst Mel Kiper Jr. ranked Allen last week as the No. 4 center in the draft. NFL.com analyst Lance Zierlein has Allen as the No. 86 overall prospect.

“It’s out of my hands,” Allen said of where he might be drafted. “The only thing that I can do is go and play well at the Senior Bowl and try to show them what I have to offer.”

Allen said he spoke to some of his fellow Spartans offensive linemen about the Senior Bowl, and they told him to just enjoy it. Yes, the draft will come soon, but for now, Allen plans on taking this process day by day.

“Being drafted would be cool,” he said. “But at the same time, wherever you go, you’ve got to work, so that’s how I kind of look at it.”