Terry Duerod spent a moment in the sun and years in the heat. 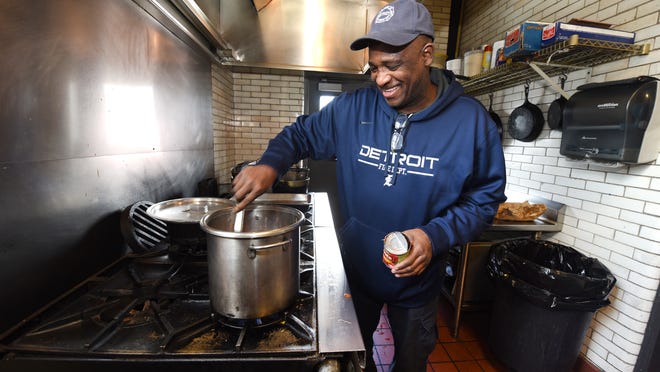 He was a bench player on the 1980-81 NBA champion Celtics before becoming a Detroit firefighter, a position he’s held for 27 years.

He’s set to retire from his second career in July, when he turns 60, because of the department’s mandatory retirement policy.

As his career winds down, the man who poured champagne on Celtics legend Larry Bird and helped pour water on burning houses in Detroit is wondering what to do next.

“I guess I’ll just sit back and chill for a while,” said the Royal Oak native, who’s assigned to Engine 55 at Joy Road and Southfield on the city’s northwest side. “I haven’t done that in a long time.”

From Highland Park High, which he led to a state championship in 1975, to the University of Detroit, where he set a school record with 303 baskets in 1979, to a four-year NBA career, to his years driving rigs to Detroit fires, the man known during his playing days as “Sweet Doo” said he’s learned the value of teamwork.

Duerod, a 1993 inductee into the Titan Hall of Fame, was honored Feb. 11 with the school’s John Conti Letterman of Distinction Award, given to former varsity athletes who distinguish themselves in the community.

“Terry is one of the best players to play for Detroit,” athletic director Robert C. Vowels Jr. said in a written statement. “When you take a look at his playing career and now as a professional serving the community as a firefighter, he exemplifies what this award is all about.”

Duerod credits legendary Titans coach Dick Vitale with preparing him for the NBA — and life.

“He was a stern coach, but he taught you how to deal with things,” Duerod said. “He always stressed how to live your life the right way: Get your education. Be a good person. He was a great motivator.”

Sgt. Roberto Romero, who worked with Duerod at Engine 8, said the competitive spirit that carried him to the NBA never dwindled.

“He’s one of the best (fire engine operators) I’ve ever ran with,” he said. “He’s really competitive, which is probably why he’s so good at what he does. Nobody will beat him to a fire, that’s for sure.”

During Duerod’s sophomore year, Vitale left the Titans to became coach of the Pistons. When the 6-foot-2 guard graduated in 1979, he was reunited with his former coach after the Pistons drafted him in the third round (48th overall).

He averaged 9.3 points his rookie year, but Vitale was fired 12 games into the season, and Duerod was left unprotected in the 1980 expansion draft. He was picked up by the Mavericks.

The Mavericks released him after 18 games, and the Celtics signed him as a free agent. It was a fortuitous move: In Boston, he became a fan favorite and earned a championship ring. When he entered games, Celtic fans would chant, “Dooooo.”

“That was a special feeling, to have fans chanting for me like that,” he said. “I’ll never forget it.

“Bird, (Kevin) McHale, (Robert) Parish, (Nate) Tiny Archibald — they were all great guys. Larry (Bird) was a jokester. Those are relationships I’ll cherish the rest of my life.”

Duerod got into four games in the 1981 NBA Finals, finishing with six points and one steal as the Celtics beat the Rockets in six games.

He played another season with the Celtics before being cut. The Warriors signed him, but released him after five games, ending his 143-game career.

“After I got waived, I ended up going overseas to play,” he said. “I went to Italy and the Philippines. Basketball wasn’t as popular overseas then like it is now, and this was before the big money.

“In the NBA, the minimum back then was only about $30,000, and you made even less overseas. So when my career ended, I needed to find a job.”

He took the test to become a firefighter and was hired in 1989. Most of his career has been driving fire trucks.

“When I first start playing with some of these young guys, they don’t know who I am, and I don’t say anything,” Duerod said. “Their friends will finally tell them, ‘Don’t you know who you’re playing with? He was in the NBA.’ ”

“We won 11 championships,” he said. “The big rivalry was between us and the cops. They wanted to beat us so bad, but they couldn’t until we got old.”

Duerod, who lives in Westland with his wife of 34 years, Rosemary, said he’ll miss the camaraderie of the firehouse.

“When you stay with these guys for days at a time, you become like family,” Duerod said. “You get to know people’s personalities. It’s really an experience.

“I had a great run. I can really say my life has been exciting. I was in the NBA. I traveled the world and had fun. And I’ve had a long career on the fire department with a great bunch of guys. What else could I ask for?”