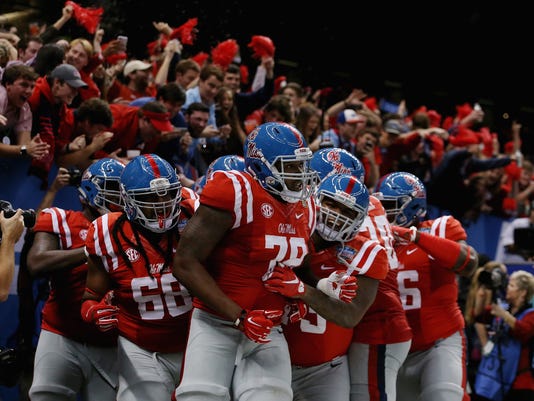 Laremy Tunsil (78) is pictured at the Sugar Bowl in January while playing for Mississippi.(Photo: Chris Graythen, Getty Images)

The university released its 154-page response Friday to the notice of allegations received in January. The NCAA’s long-running investigation began in 2012 after a university probe discovered academic and recruiting misconduct involving the women’s basketball program. Ole Miss later acknowledged the investigation had spread to the football and track and field programs.

“The University has accepted responsibility for the violations that occurred and self-imposed meaningful penalties,” Ole Miss said in its response. The university said that it “erred toward the upper limits” of the range of each penalty imposed.

The penalties — which the NCAA can accept or add to — didn’t include a postseason ban in football, which faces eight Level I violations qualifying as severe breaches of conduct and 14 altogether.

The university’s self-imposed penalties to the football program include three years of probation and 11 fewer total scholarships over four years starting with the most recent recruiting class, limiting Ole Miss to 22 signees instead of 25 in each of the next three years. The violations include left tackle Tunsil’s use of three loaner cars over a six-month period.

Two boosters who provided money and / or lodging to Tunsil’s stepfather, including one payout of at least $500, were indefinitely disassociated. A third, one of the owners of an Oxford car dealership, was disassociated for three years for providing the loaner cars. Tunsil was only identified as “Student-Athlete I” in the response. Another athlete kept a loaner vehicle for more than a month after his own was repaired.

The car dealer also allowed Tunsil to postpone his $3,000 down payment on a 2010 Dodge Challenger for three or four months.

The university also has asked to delay a hearing before the Committee on Infractions while it looks into draft-night allegations involving Tunsil, who was picked by the Miami Dolphins. Tunsil was the story of the NFL draft after a bizarre 30-second video of him smoking from a gas mask-bong contraption was posted on his Twitter account just before the selections began. There was also a post on Tunsil’s Instagram account showing an alleged text conversation with a football staff member about arranging payment for bills.

Tunsil said both accounts were hacked, but acknowledged following the draft that he accepted money from a coach while he was at Ole Miss.

In a letter attached to the university’s response, Chancellor Jeffrey Vitter and athletic director Ross Bjork said Ole Miss and the NCAA started reviewing the cases for potential violations that night, “and we hope this review will be concluded soon.”

“To ensure fairness to all parties and pursuant to COI procedure, we have asked the COI to remove the hearing from this summer’s docket until this review can be completed and closed,” the university officials wrote.

Before the arrival of current football coach Hugh Freeze, the university said former staff member David Saunders allegedly arranged for fraudulent ACT scores for three prospects and that Saunders and ex-assistant committed unethical conduct during the investigation and after they left the school.

Ole Miss only contested one of the 28 allegations while stating that five more should be categorized on a different level. The university also imposed a fine of $159,325 and said it expects to spend more than $1.5 million on the cases.

The university cited mitigating factors in its favor, including that “all but one of the 16 Level I violations arose from intentional misconduct committed by rogue former employees or boosters outside the University’s direct control acting in contravention of rules education provided to them by the University.”