Bizarre scenario has Eastern kicking off from foe's 20

Three consecutive deadball penalties — 45 yards in total — on an interception return for a TD led to unlikely play.

Bizarre scenario has Eastern kicking off from foe's 20 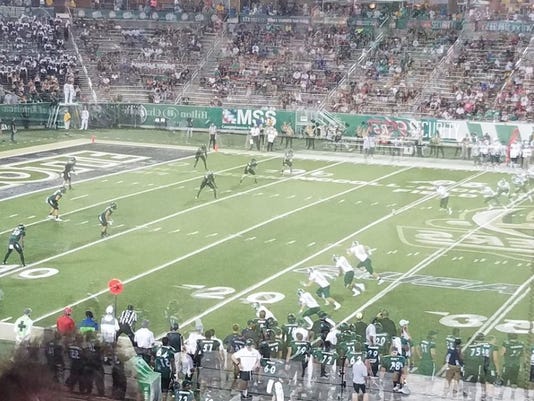 Chris Creighton has been coaching football, at some level, since 1991.

And he'd never seen that before.

During Saturday's game, Eastern Michigan kicked off from the opponent's 20-yard-line.

"It's one of them," Creighton said with a laugh Monday morning, when asked on a conference call if that's one the strangest scenarios he's seen on a football field.

"It's definitely a bizarre situation. I even asked our team yesterday, 'Has anybody ever been a part of it or seen that,' and not a single hand went in the air."

Here's how it happened.

With less than 4 minutes left in the third quarter, Eastern Michigan's Jaylen Pickett intercepted a pass from Charlotte's Kevin Olsen and returned it 36 yards for the touchdown and a 34-6 lead.

On the play, Charlotte's Austin Duke was flagged for a personal foul, as was Jarred Barr. That's 30 yards there.
Then, on the PAT, Larry Ogunjobi was called for roughing the kicker.

Never really seen this before. @SportsCenter@NCGridironNewspic.twitter.com/6RFX20ZAbT

Forty-five yards in penalties, and EMU was kicking off from Charlotte's 20.

"What do you do?" Creighton said. "We kicked the onside kick. I was a little worried that it would go out of bounds.

"I've never been a part of it. If we were to do it again, I think we would end up doing the same thing.

"We don't have any regrets."

It was a tricky situation, as a kick into the end zone would start Charlotte on the 25-yard line — past where the kickoff started from. And a kick out of bounds would've started Charlotte at the 35, even worse.

Charlotte recovered the onside kick and returned it 2 yards to its 16-yard line.