Paul: Fleck, Western Michigan cherish time they have together 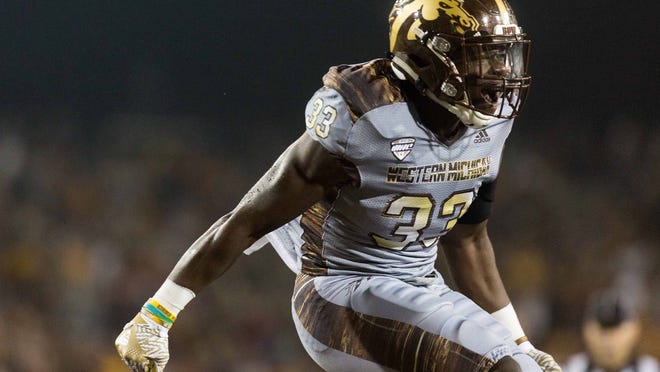 Mt. Pleasant, Mich. – It was late Saturday night, another drizzle was starting, and Western Michigan players were taking their turns posing for pictures with a Victory Cannon trophy that now has been in their possession since Nov. 22, 2015.

Amid the hoopla, athletic director Kathy Beauregard stood, unassumingly, off to the side of the field at Kelly/Shorts Stadium, taking it all in.

She's loving this, every second of this resurgence of a football program that, arguably, has never seen better days than these.

The Broncos, with a 49-10 whipping of rival Central Michigan, are 5-0 for the first time since 1994, before their current head coach was in high school. They've won seven games in a row dating to last season, the fourth-longest streak in the nation. (Some team from Alabama is No. 1.)

And, yet, this year's team has all the fixins to make last year's rather forgettable.

Western Michigan is most definitely a force in college football, a mid-major on the rise, with the potential to be the next TCU or BYU.

The question is -- and, frankly, it has been for quite some time now -- how long can Western Michigan realistically expect its wunderkind, P.J. Fleck, to stick around?

"We just take it day by day," said Beauregard, who's asked that question all the time, and never really ducks it, because she knows what's up, she knows the game -- and she also knows Western Michigan is darn fortunate to have Fleck until the day he finally decides to leave, even if it was Beauregard who took a chance on a 30-something who'd never been even a coordinator before arriving in Kalamazoo, let alone a head coach.

Fleck always is much more dismissive of the question.

His old, stand-by line used to be: How can a coach with a career record below .500 be considered for so many job openings?

Well, that doesn't work anymore. Last week, WMU beat Georgia Southern to make Fleck a .500 coach, and on Saturday, by beating CMU, Fleck's career record is over .500 for the first time, at 22-21. There's a very good chance it may never get below .500 again.

If they had played the Michigan Mighty Mites, it might've been a nail biter.

Western Michigan is 5-0 after trouncing Central

It's awfully hard to believe that was just four years ago, after the absolute dominance that was on display Saturday night

This was WMU's third straight victory in the rivalry; the last time it lost to CMU was that awful 2012 season.

"It feels real good," said senior Corey Davis, a history-making receiver who was one of Fleck’s first recruits at WMU. "They got us that first year. That left a bad taste in my mouth, but we answered.

And it's only going to get better.

This WMU team -- decent the last two years at 8-5 -- can do it all, scoring in bunches on offense, and, for good measure, scoring on defense and special teams, too. And about that defense -- in the Mid-American Conference opener, it cooped up CMU's senior QB, Cooper Rush, like rarely has been done before. In non-conference play, it beat two Big Ten teams. Only Michigan and Nebraska also have multiple wins over Big Ten opponents this season, and they actually play in the Big Ten.

The way the schedule now lines up, there's a very good chance -- at least, if the Broncos stay healthy, and they had a couple scares Saturday -- they could very well be 11-0 entering the regular-season finale against tough Toledo. It's not even unrealistic to foresee WMU being 13-0 heading into its bowl game, and wouldn't that make for an interesting debate about its deserved destination?

And you think the Fleck murmurs were loud before.

Even he can't deny the potential for this year, though he's obsessed with the process, and process doesn't allow you to look far ahead.

"It's an incredible football team, guys," Fleck said. "They love each other, they're truly a family. It's special, what they have, win or lose.

"We've gotten to a point at Western Michigan where games matter, they really matter! I mean, that's incredible from where we were."

There's already been interest in Fleck from bigger schools, and two years ago, WMU could see it coming -- so it renegotiated Fleck's deal, extending him through 2020, and making him the highest-compensated coach in the MAC.

Fleck earns a base salary of $800,000, when you factory in his TV/radio appearance money, university fund-raising glad-handing, and his annual retention bonus.

He also gets a car, car insurance, car maintenance, a cell phone and a country-club membership.

Coaching for a national championship, of course, is something Fleck can never dream to achieve at Western Michigan, even though he's an admitted big dreamer. So that's why it’s likely he’ll move on eventually.

The university, though, isn't handcuffing him with any crazy expensive buyout. If he leaves after this year, he owes WMU $600,000; if he leaves after next year, he owes WMU $400,000. Any Power Five school would pick up that tab -- a tab that's reasonable, because there's big-time mutual respect between a school that wanted back on the map and a coach who's gotten that done, and then some.

Fleck has time on his side, whatever he decides to do. He's young (35), so he doesn't have to worry that if he passes on one supposedly better job, he'll never get another chance. That means he doesn't have to jump at the first crack, like, say, a lower-tier Big Ten gig (hello, Purdue).

Instead, he can be patient and picky, like DJ Durkin and Pat Narduzzi, who waited for the right gigs -- in this case, Maryland and Pittsburgh, respectively.

For now, Fleck can stick to focusing on his favorite pastime, the present.

A few feet away, there stood Beauregard, quietly, but beaming.

Nothing lasts forever, but she'll cherish every day he stays.