UConn’s Kia Nurse heard the boasts from Syracuse that it would bring the best backcourt in America. 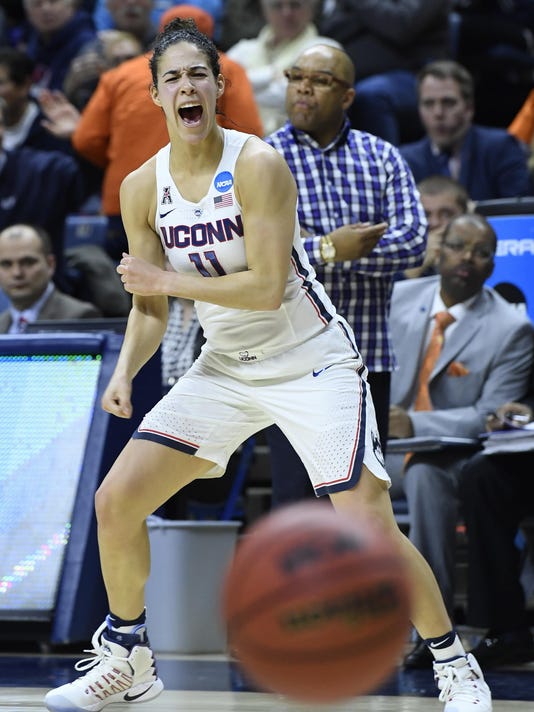 Storrs, Conn. — UConn’s Kia Nurse heard the boasts from Syracuse that it would bring the best backcourt in America into Monday night’s second-round rematch of last year’s national championship game.

She used that as motivation.

The junior guard scored 29 points and tied an NCAA Tournament record with nine 3-pointers to lead UConn to a 94-64 win over the Orange.

The boasting “allows you to play with a bit of a chip on your shoulder,” she said. “For us, we like to prove it with the way that we play.”

Nurse hit 10 of her 13 shots, missing three attempts from behind the arc for the Huskies, who won for the 109th straight time and 26th straight in the NCAA Tournament. That streak includes last April’s 82-51 win over the Orange that gave the Huskies their fourth consecutive title.

Gabby Williams and Katie Lou Samuelson each added 23 points and Napheesa Collier chipped in with 17 for UConn (34-0), which led by as many as 36 points.

Geno Auriemma said the performance had him shaking his head in awe.

“Those first three quarters I just thought we were about as good as we can be in a lot of the areas you need to be good in this time of the year,” he said.

Alexis Peterson had 25 points to lead Syracuse, which finished its season at 22-11. Backcourt mate Brittney Sykes added 15 and Briana Day had 13 for the Orange.

UConn held Syracuse without a field goal for more than 3 ½ minutes early in the first quarter and used a 9-0 run to build an 18-7 lead.

The Huskies hit 12 of their first 18 shots and led 28-11 after a fast-break bucket at the first-quarter buzzer by Crystal Dangerfield.

Nurse, who missed the final four games of the regular season with a stress injury in her right ankle, had eight 3-pointers and 26 points by halftime and the Huskies led 57-29.

Her ninth 3-pointer, a bank shot, put UConn up 66-37 in the third quarter and tied her with Purdue’s Courtney Moses, who had nine in the 2012 tournament.

“Once you see one or two go in the net, you shoot it with confidence,” she said. “Confidence is half the battle.”

Oregon 74, (at) Duke 65: Ruthy Hebard had 20 points and 15 rebounds, and Oregon earned its first Sweet 16 berth by upsetting Duke.

Maite Cazorla added 17 points and Lexi Bando finished with 14 points to help Oregon (22-13) become the first No. 10 seed in a decade to reach the round of 16.

The Ducks, in their first tournament since 2005, had never advanced past the second round in their 12 previous appearances. Now they’re on to Bridgeport, Connecticut, to take on third-seeded Maryland (32-2) in a regional semifinal.

Lexie Brown scored 25 points for the second-seeded Blue Devils (28-6), who have been upset at home in the tournament’s second round twice since 2014. They played without guard Kyra Lambert, who tore her left anterior cruciate ligament in the first round against Hampton.

Monique Billings and Jordin Canada each added 12 points for the Bruins, who had the largest margin of victory in school history in a tournament game.

Star point guard Jordin Canada left the game in the third quarter with a cut on her forehead. Trainers stopped the bleeding, applied a bandage and she quickly returned to the game.

UCLA made its first three 3-pointers to build a 9-2 lead and never looked back in a tuneup for its Sweet 16 matchup against No. 1 overall seed UConn.

The Bruins led by 21 points at halftime and extended that lead to 31 points at 62-31 after three quarters. There would be no Texas A&M comeback bid this time. The Aggies rallied from a 21-point fourth quarter deficit to get past Penn in the first round.

(At) Baylor 86, California 46: Alexis Prince and Nina Davis each scored 16 points and the Baylor women are going to the Sweet 16 for the ninth year in a row after a win over California.

Davis, one of four Baylor seniors, also had six rebounds and five assists in her last game at the Ferrell Center, where the top-seeded Lady Bears have won 12 consecutive NCAA Tournament games. Prince added five rebounds and six assists, while Kristy Wallace had 10 points and nine assists.

Baylor (32-3) took control with a 13-0 run in the second quarter, including freshman Natalie Chou hitting consecutive 3-pointers in a 17-second span during which coach Kim Mulkey emphatically pumped her fists. After a California timeout and then a missed shot, Prince hit a run-ending jumper that put Baylor up 35-16.

Kristine Anigwe had 20 points and 11 rebounds for ninth-seeded California (20-14).

Moore’s perimeter shooting provided a lift on a night that fourth-seeded Louisville had to work hard late to finish 44 percent from the field. She scored the Cardinals’ first eight points of the fourth quarter with back-to-back 3s for a 54-47 lead before Durr followed with seven of their next eight points to make it 62-51 with 4:07 remaining. Durr also became the 28th Louisville player to reach 1,000 career points.

Fifth-seeded Tennessee got within five but no closer as Louisville earned its first Sweet 16 berth in two years and seventh overall under coach Jeff Walz. The Cardinals will face the Baylor-California winner on Friday in the Oklahoma City Region semifinal.

Jaime Nared had 28 points and 11 rebounds for Tennessee (20-12), which shot 33 percent in losing its first second-round tournament game in program history. Diamond DeShields had 15.

(At) Washington 108, Oklahoma 82: Kelsey Plum scored 38 points, adding another record to her career resume, and No. 3 seed Washington raced past No. 6 seed Oklahoma.

The Huskies (29-5) are going to the Sweet 16 in consecutive years for the first time in school history, thanks to an offensive showcase against the Sooners where Plum didn’t do it alone.

But she found others and her teammates regularly hit big shots after Plum drew attention, with a career-high 11 assists. Washington had four players in double figures all with at least 16 points.

The Cardinal (30-5) had no problem dealing with the Wildcats (23-11) or their home crowd, which spent much of the game sitting in silence. Stanford roared to a 39-21 halftime lead and never looked back in advancing to face No. 3 seed Texas on Friday night in Lexington, Kentucky.

The Cardinal beat the Longhorns 71-59 when they met in early November.

Kindred Wesemann had 11 points and Breanna Lewis was held to nine in their final game for the Wildcats (23-11), who have not advanced past the NCAA Tournament’s opening weekend since 2002.

Neither senior star could get on track after combining for 39 in the opening round.

Sarah Shewan and Paula Strautmane each scored 11 for Quinnipiac (29-6), which will head to Stockton, California and play top-seeded South Carolina on Saturday. The Bobcats of the Metro Atlantic Athletic Conference made 15 of 26 from 3-point range, and won their 12th straight game.

Every time Miami made a run, Quinnipiac would answer.

What was as much as a 13-point lead was cut to one late, before Martucci’s 3-pointer with 57.5 seconds left put Quinnipiac up 78-74. Manz knocked the ball away from Miami’s Jessica Thomas on a drive on the ensuing Hurricanes’ possession, and the Bobcats — probably best known in Division I as a hockey school — would soon be celebrating the biggest win in the history of their program.