Michigan and MSU held their breath on NCAA Tournament Selection Day a year ago, only to come away disappointed.

Michigan baseball spent most of last season in the national rankings.

When crunch time arrived, however, there was no NCAA Tournament invitation.

“I’d be lying to you if I didn’t say we have a massive chip on our shoulder,” coach Erik Bakich said. “It’s something we don’t run away from. We didn’t finish strong last year; we very much tanked at the end.

Mission accomplished on the front end of that, as the Wolverines are 16-4 and ranked No. 18 nationally, up from 21 a week ago, while getting set for the start of Big Ten play this weekend, at Maryland.

Michigan, Michigan State, Maryland and Nebraska are considered the front-runners in a Big Ten Conference that’s made great gains in talent and national awareness over the last several seasons in a sport that’s long been dominated by the Southern schools.

Michigan State has started 12-5, ahead of this weekend’s Big Ten-opening series at Illinois.

Both the Wolverines and Spartans held their breath on NCAA Tournament Selection Day a year ago, only to come away disappointed. The Big Ten sent three teams, tournament champion Ohio State — which eliminated Michigan, then Michigan State in the tournament — and at-large teams Minnesota and Nebraska.

“We started off pretty good, pretty hot early (last year), and then kind of petered out toward the end,” Michigan State coach Jake Boss said. “We’re trying to do some things differently in practice, with regard to how we work and how we keep guys fresh, keep guys, technique-wise, kind of locked in there.

“We kind of got away from that a little bit last year. Hopefully that makes a difference.”

Those two batted eighth and ninth much of last season; this season, they’re Bakich’s No. 3 and No. 1 hitters.

“We have a very deep lineup,” Bakich said. “By no means are we peaking.” 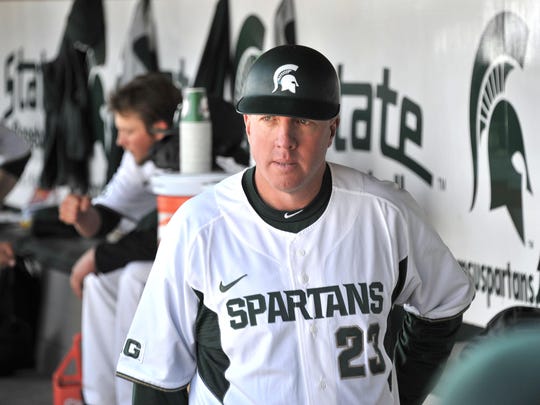 Michigan State has some offensive potential, too, as it did last season, before it really struggled to score runs. That said, it’s already been dealt a blow, with freshman outfielder Danny Gleaves (.324, 12 RBIs) out for at least a week with a knee injury.

The strength for the Spartans, though, seems to be a deep and loaded bullpen, headlined by senior Walter Borkovich (4-0, 2.45 ERA), junior Jake Lowery (2.40 ERA, 23 strikeouts in 15 innings) and closer Riley McCauley, a sophomore from Sterling Heights who has five saves.

“The other guys have been up and down. I’d like to see a little more consistency,” said Boss, who last weekend earned his 300th Division I coaching victory. “As deep as we are in the ’pen, though, you’ve got a little more leeway there, where we can feel good about getting into the bullpen early and still being OK.”

Both teams started strong last year but didn’t have the finish they wanted.

Some of that could be linked to the increased availability of video scouting reports, as so many games now are broadcast either on the Big Ten Network or streamed on ESPN3. Where it used to be more challenging to find clips, that’s not an issue anymore.

That’s an adjustment many baseball teams across the nation are facing. The word on how to pitch guys, or how to attack pitchers, is much more accessible, and available much earlier in the season than it was even just a few years ago.

Michigan, 41st in the national Ratings Percentage Index (RPI), is trying to get back to the NCAAs for the second time under Bakich (2015), and Michigan State, 16th in the RPI, is looking for a second bid under Boss (2012).

But first thing’s first, and that’s the Big Ten, with conference play set to kick off.

“Last year was a good learning experience,” Bakich said. “I think we got caught up a little bit in the end wondering if we started paying a little too much attention to the metrics and analytics and other peoples’ opinions (about an NCAA bid). This year, we couldn’t care less.

“It doesn’t matter. The only ranking that matters is the final one.”

Outlook: The Wolverines went 2-1 on a tough West Coast trip, losing 1-0 to UCLA, before beating Southern Cal and nationally ranked San Diego. ... Junior LHP Oliver Jaskie is 3-0 with a 2.60 ERA and 32 strikeouts in 27.2 innings.

Outlook: The Spartans’ early marquee road trip was a tough one, going 0-3 in South Carolina, with one game against No. 7 Clemson and two No. 8 South Carolina. The South Carolina games were good, close ballgames, though.

Outlook: The Golden Grizzlies are trying something different, having hired co-coaches — almost unheard-of in Division I athletics. It’s been a tough start for Kaline, the grandson of Mr. Tiger Al Kaline, and Healey, an ex-assistant.

Outlook: The Eagles challenged themselves with a three-game set at now-No. 2 Louisville, and were swept, but competed, especially in a 3-2, extra-inning loss. ... Only freshman Devin Hager (.326) is batting better than .300.

Outlook: The Broncos, in surprising fashion, earned the program’s first NCAA Tournament berth since 1989. ... Junior Tanner Allison is batting .431 with six homers and 31 RBIs. ... They play Michigan State at Comerica Park on May 9.

Outlook: The Chippewas played a four-game set at Northwestern, and took three games from the Big Ten team. ... Sophomore Daniel Robinson is batting .348 with 12 stolen bases. ... They play Notre Dame at Comerica Park on April 18.

Outlook: Senior Griffin Harms (Birmingham Groves) is hitting .313 with four home runs and 17 RBIs. ... Freshman RHP Hunter Brown (St. Clair) has an 0.90 ERA, working as a starter and a reliever.

Note: Detroit Mercy does not have a baseball team.