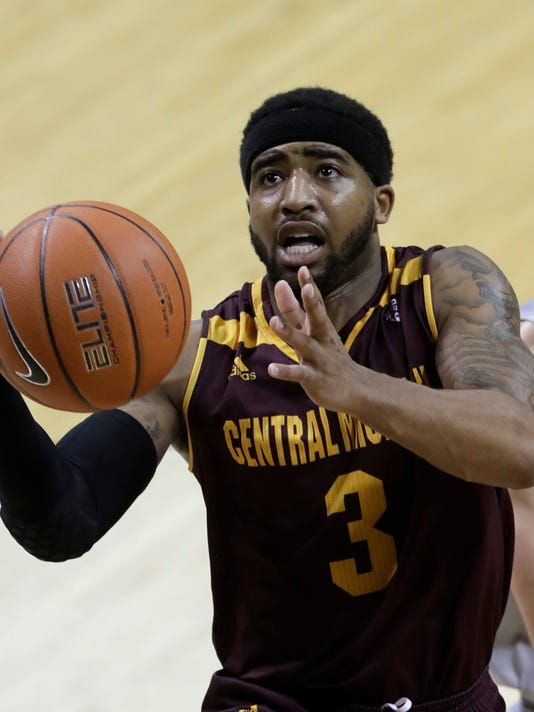 It was a widely expected announcement since the end of Central Michigan's season, when Keene concluded his junior year as the nation's leading scorer at just decimal points below 30 points a game.

"I was hearing a lot of feedback from some NBA scouts and from different people," Keene said. "They feel like my stock really wouldn't get any higher."

Keene arrived in Mount Pleasant after transferring from Youngstown State, where he played two seasons.

Keene's shooting skills, along with those of teammate and fellow Texas native Braylon Rayson, drew record crowds to McGuirk Arena, including two sellouts for the first time in school history.

That exposure, including profiles in major national media outlets, could pay dividends for coach Keno Davis for some time.

"We appreciate Marcus for his time at Central Michigan," Davis said. "The influence Marcus has had will impact the program positively for years to come.

"We wish Marcus the best as he pursues his dream of playing professional basketball. He will have a great number of fans and supporters, many of which wear the Maroon and Gold."

Keene was named first-team All-Mid-American Conference and an All-America honorable mention, but oddly fell well short of winning the conference's player of the year award. That probably had something to do with the team's overall record of 16-16, which included eight consecutive losses to close the season.

He was a Wooden Award finalist in the second-to-last round of cuts, but wasn't among the final four candidates announced Monday.

Keene is taking the same path as former Oakland University star Kay Felder, who left before his senior season, after he led the nation in assists and was fourth in scoring as a junior. He was drafted late in the second round by the Cleveland Cavaliers, who gave him a contract that guaranteed him $1 million.

The NBA Combine is May 9-14 in Chicago, and Keene hopes to get an invitation. The draft is June 22.

He said his goal over the next several weeks is to get stronger and prove he can play defense, too. That was a knock on him this season.

"I'm always a confident person in myself," Keene said. "And I feel really good about the decision I made. I'm a man, so I have to live with the decision that I made and go from there.

"I'm grateful to this day, to Coach Keno, I just thank him. I don't even think any other coach in the country would allow me to play how I play every night."

Keene's counterpart at Western Michigan, Thomas Wilder, also has declared for the draft, but will not hire an agent, leaving the option to withdraw his name by June 12 and return to school. Michigan State's Miles Bridges and Michigan's Moritz Wagner and D.J. Wilson haven't yet stated their intentions.

Keene said he hasn't hired an agent yet, but is actively searching for one. Some in the industry suspect he could land with Aaron Turner of Verus Team Management. Turner represents Atlanta Hawks rookie Taurean Prince, a former teammate of Keene's at Earn Warren High in San Antonio.

* Michigan on Tuesday is starting an 18-game home stand. And, no, that's not a typo. The Wolverines won't go on the road again until April 28. Ten of the games will be Big Ten games.

"Please tell Mother Nature to be nice for the next month," coach Erik Bakich said.

Michigan (17-8) fell to No. 22 from No. 18 in the latest NCAA rankings, after losing two out of three over the weekend at Maryland. The Wolverines dropped out of Baseball America's top 25.

* Got to love the confidence of Western Michigan coach Billy Gernon, who, when asked if his team was ready for Tuesday's game against a Michigan State team that scored 41 runs over the weekend at Illinois, responded: "They better be ready for us, too."

* The Oakland-Central Michigan game scheduled for April 11 at Jimmy John's Field in Utica is being pushed back to April 26.

This is Spears' second run as an interim AD, after serving in the post at Northern Illinois for five months in early 2014.

Spears, who was deputy director of athletics under Lyke, is the leading internal candidate for the main job. Eastern Michigan said it's conducting a national search, though it's not yet known if the university will hire a search firm.

Western Michigan hockey coach Andy Murray sounded very hopeful earlier this week that all his underclassmen would be back for 2017-18. Bad news, though. That doesn't appear to be the case.

Those two made up the team's best line this past season, which culminated with an NCAA Tournament appearance, along with Sheldon Dries (Macomb), who just finished his senior season.

The trio combined for 51 goals and 48 assists.