Down 17 in the second half on the road, there was no panic in No. 25 Memphis. 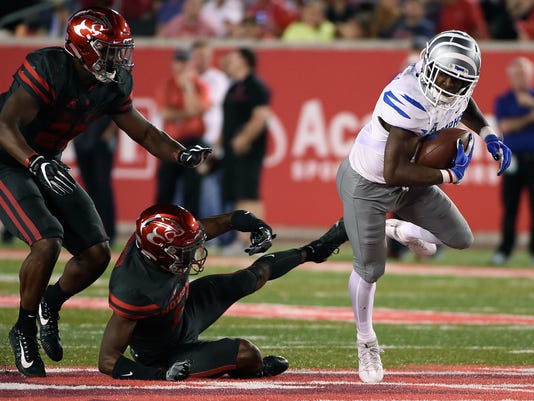 Houston — Down 17 in the second half on the road, there was no panic in No. 25 Memphis.

The Tigers kept their focus and finished with a victory.

Riley Ferguson threw for 471 yards and had a 21-yard TD pass with 1:28 left, Patrick Taylor rushed for a career-high four touchdowns and Memphis rallied to beat Houston 42-38 on Thursday night.

"Offensively, to go from being shutout in the first half, not playing our best ball, a lot of mistakes, everything that could probably go wrong in the first half did," Memphis coach Mike Norvell said. "But, I came into the locker room and there was something about their eyes. No panic. They came out and absolutely responded."

"We said we had to stay focused," Ferguson said. "We knew we would be able to score as long as we didn't hurt ourselves. We knew we had to regain our focus and stop shooting ourselves in the foot."

Anthony Miller caught 10 passes for 178 yards, and Tony Pollard had nine catches for 91 yards. Memphis finished with 501 yards but only 30 rushing yards.

"It was just ground and pound," Taylor said about his four touchdown runs. "It was taking advantage of every opportunity that they gave me when they gave me the ball."

Houston (4-3, 2-2) was driving when Kyle Postma fumbled at the Memphis 49, with T.J. Carter recovering with a minute remaining. After Memphis punted, Postma's pass was intercepted by Carter with 24 seconds remaining to end the game.

"It came down to finishing and securing of the ball at the end of the game," Postma said.

Dillon Birden finished with 106 yards and a touchdown on 21 carries, and Duke Catalon rushed for 65 yards and a career-high three touchdowns as Houston built a 17-0 lead at the half and 31-14 advantage with 1 1/2 minutes left in the third quarter.

"We have to play well in crunch time and to do that we have to understand our assignments and the situation and what's on the line," Houston coach Major Applewhite said.

The Cougars led 38-28 with 6:44 left after Postma found Steven Dunbar for an 8-yard touchdown pass. Taylor cut the lead to three with a 5-yard run with 5:14 left. After Memphis forced a Houston three-and-out, Ferguson capped the comeback.

"We talked today that our term is unwavering focus no matter what happens," Norvell said. "We were in a hostile environment. There were emotional swings, momentum swings. We were trying to stay focused on doing our job because the next play could be make all the difference in the game, and our guys did that."

Postma finished 29 of 40 for 315 yards, and Linell Bonner caught eight passes for 121 yards for Houston. The Cougars had 554 yards.

Ferguson was 17 of 26 for 279 yards and a touchdown in the second half. The Tigers scored on their first six drives of the second half. The only drive they didn't score on was the final play following Carter's interception. Memphis committed two penalties for 10 yards.