Central Michigan’s first victory in the NCAA Women’s Tournament drew quite the response from Michael Alford. 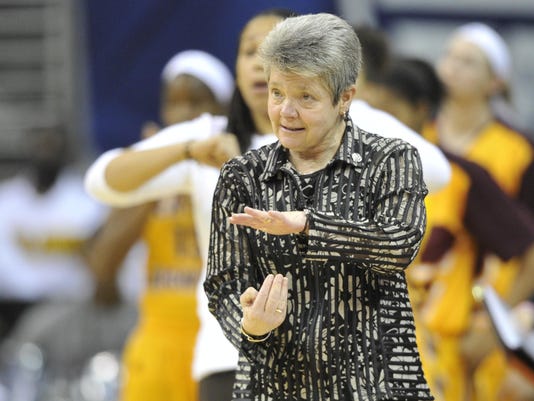 Sue Guevera isn’t too worried about the crowd, or her kids' reaction to it.(Photo: David Richard / Associated Press)

He took to Twitter on Saturday following a 78-69 victory over LSU, with a penned letter.

It read: “To the city of Mount Pleasant, due to Chippewa NCAA fever all of the city can have Monday off and come to Columbus. Please use this as an excuse for school or work. Fire up Chips! Michael.”

If only he had such official authority.

The Chippewas (29-4) sure could use the support at St. John Arena, located on the campus of Ohio State — which also just happens to be Central’s second-round opponent.

Ohio State (28-6) is the champion of the Big Ten regular season and conference tournament, and thus earned the No. 3 seed and the right to host the first two rounds. It beat George Washington, 87-45, in the first round. The Chippewas and Buckeyes will tip-off at 6:30 tonight.

Interestingly, Guevera isn’t too worried about the crowd, or her kids' reaction to it.

“I think they’ll handle it fine. We played at Toledo and Toledo has a very nice crowd ... Buffalo at Buffalo, they have a pretty nice crowd,” Guevera said Sunday afternoon, after allowing herself a little bit “me” time, which included a swim and a walk. “Our kids, and I really, again, you know, broken record, I don’t think we look at that crowd. The only way we can take the crowd out of it is to not allow big plays.”

Easier said than done against an Ohio State team that has won 12 of 13 games and has a big size advantage on the Chippewas, putting the pressure squarely on senior forward and Mid-American Conference player of the year Tinara Moore.

“She can go off and make a lot of shots,” said Central point guard Presley Hudson, a junior.

So it could be a track meet, and track meets can be fun.

Of course, this whole Central run has been fun for the 11th-seeded Chippewas, even if the players are trying their best to downplay the hoopla and act like the win over No. 6 LSU wasn’t some big program milestone.

It was Central’s first NCAA win in four appearances. It also was Guevera’s first since 2001, when she was at Michigan.

Not that she’s been counting the days for NCAA win No. 2.

“No. You know what, if I did, I’d probably have an ulcer. I’d be swimming and running, I’d be doing two-a-days,” she said. “If it consumes me, then you get uptight, and if you get uptight, your team gets uptight.

“It’s that old thing, control what you can control. I think that’s what our kids have done.”

Interestingly, the last time Guevara was part of a team that made it to the Sweet 16 — the prize for the winner of tonight’s game — was 1985, when she was a graduate assistant at Ohio State. It played at St. John Arena and made the Elite Eight.

Up next: Winner advances to the Sweet 16 and the Spokane Regional semifinals against either No. 2 Oregon or No. 10 Minnesota.